The upsurge in terrorist violence had gone as far as Punjab, even reaching the summits of military leadership in Pakistan. The concluding part of an exclusive two-part extract… 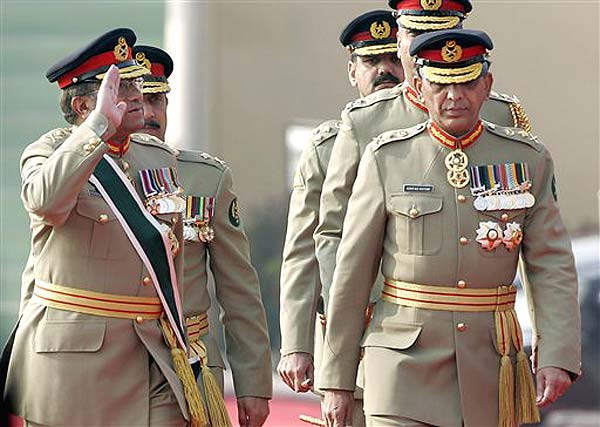 Although the story of Major Haroon and his army confederates (including his brother) suggests that officers are influenced by Islamist sympathies, the case of his victim, Alvi, indicates that many soldiers were prepared to combat Islamism—after they realised what was at stake in purely pragmatic terms. Indeed, the main reason why the Pakistani army supported Islamists had little to do with ideology: the Jihadists were supposed to help Pakistan "to bleed India" and to give the country some "strategic depth" in Afghanistan. When the price to pay for these worldly objectives became too expensive, Rawalpindi started to change tracks.

The Pakistan Army gradually began to crack down in the tribal areas, engaging its troops under growing pressure from the United States, which applied with the carrot and stick approach. On one hand, US intelligence services were well enough established in the area to denounce ISI cooperation with the Islamists. On the other, the carrot involved increasingly convincing financial arguments. American aid had in fact reached unprecedented heights in the mid-2000s, the main component being security related

The Pakistan Army was all the more sensitive to the financial argument used by the Americans as this windfall finally enabled it to procure military equipment that could rival with India’s.

General Musharraf’s strategy changed course in the mid-2000s. He purged the ISI, no longer settling for replacing overtly visible chiefs at the top, but also going further down the hierarchy. Colonel Imam thus fell out of favour.

Musharraf especially learned lessons from operations carried out in the tribal areas. The Kazha Punga offensive had clearly demonstrated the need to strengthen the Special Services Group (SSG), the elite commando with which Musharraf himself had trained. Musharraf thus created the SSG Special Operations Task Force (SOTF) and required the head of the SSG to be a two-star general. In August 2003, Major General Amir Faisal Alvi, whose tragic end was related above, was appointed to this post. A few months later, on 2 October 2003, he conducted the operation in Angoor Ada mentioned above. Alvi had been eager to improve his organization’s cooperation with Western security forces (particularly British special forces). But Alvi had to face opposition within the army, which allegedly forced him into early retirement in 2005. He was murdered three years later.

After Musharraf was replaced as COAS by former ISI head General Kayani (one of the last senior Pakistani officers to have been partly trained in the United States in the 1960s), the Pakistan Army proved more determined in its fight against Islamism—up to a point. Major Haroon was arrested in February 2009 and six months later—though there is not necessarily a relationship of cause and effect—Interior Minister Malik Rehman stated on television, "officers of the rank of major in the intelligence agencies with links with the Taliban and Al Qaeda had been arrested because they wanted to target army generals." The army stepped up operations in the Pashtun areas. 211 of them reportedly took place from 2007 to 2010, involving 150,000 of its 550,000 soldiers. Losses were heavy, estimated at around 2,300, including three generals, five brigadiers and seventy-three intelligence agents. Operations in Swat and Bajaur Valleys alone cost the lives of 400 soldiers.

Some of the territory that had been lost was won back through this engagement. The army regained a footing in Kurram Agency, for instance. There are probably several explanations for this change in strategy. First, the army became aware of the challenge the entire Islamist sphere (including what it heretofore considered as "good Islamists") posed to its authority and Pakistan’s territorial integrity. Second, public opinion had evolved, as much in FATA—where the Islamists’ Robin Hood image had been seriously tarnished by the oppressive and violent methods mentioned above—as in the rest of the country, particularly after the bloody "conquest" of the Swat Valley: the army now had backing for its military operations against groups no longer perceived as mujahideen out to liberate Afghanistan as was often the case before, but as aggressors challenging a lifestyle and culture associated with modernity and national identity respectively.

The LeT may be the only movement the army has not attacked, but North Waziristan is the only bastion it has not attacked either until 2014. It has constantly been reluctant to do so, despite American pressure, not only because this Agency is where the Haqqani network is located, but also because of the substantial consequences such an attack would entail. First, the Pakistan Army is afraid of sustaining unbearable losses, or even of failing in its mission. Second, it fears threats of suicide attacks in retaliation. Such is the conclusion reached by observers of the series of attacks in 2009 that aimed to dissuade the army from carrying out the operation it had planned in South Waziristan.

The upsurge in terrorist violence had gone as far as Punjab, even reaching the summits of military leadership, as we will see in the following section, indicating the Islamists striking power. As long as the violence was concentrated on the other side of the Indus River, the country’s nerve centres from Lahore to Islamabad as well as public opinion showed little concern. It was a different story after these attacks.

In 2009, it did launch an operation in South Waziristan, Operation Rahe-Nijat. 30,000 troops were deployed against 15,000 combatants, including 1,500 foreign fighters (two thirds of them Uzbeks). By the end of the year the army had regained its control over South Waziristan and killed, officially, 500 Taliban and 200 Uzbeks. One of the military officers who implemented it, Brigadier Abu Bakr Amin Bajwa, reported that the army seized "tons of ammunition", including anti-aircraft ammunition of 12.7 mm and 14.5 mm and anti-aircraft guns as well as rocket launchers.172 But he admitted that few terrorists were caught or killed: they were "on the run", either in Afghanistan or in North Waziristan—the heart of the matter in the FATA.

Punjab, the key province of Pakistan, has traditionally been one of the most conservative regions of the country, as evident from its attachment to the Sharia. According to a 2009 survey comparing Punjab, Sind and Balochistan, 49 per cent of the Punjabis, 20 per cent of the Sindhis and 17 per cent of the Balochs wanted sharia "to play a much larger role than present" in the state. Moreover, Punjab has been the birthplace of most of the Islamic and Islamist organisations, including the Jama’at-e-Islami and the LeT. The increasing militancy of Punjabi islamists has found expression in the convergence of sectarian groups, jihadist movements and the Taliban, as the recent upsurge in violence indicates.

This rapprochement was precipitated, as mentioned above, by Musharraf’s policy after 9/11. The closing down of jihadi camps in Azad Kashmir and elsewhere pushed militants towards the FATA, where the Islamists who were to form the TTP welcome them, not only because of ideological affinities, but for logistical reasons. Eager to sustain terror campaigns in Islamabad and Lahore—probably the power centres which matter the most—the Pashtun jihadists needed the expertise of Punjab-based militants.