He had in June 2021 announced that the party's chief ministerial face for the 2022 Punjab Assembly polls will be from the Sikh community, and said the entire Punjab will be proud of him. 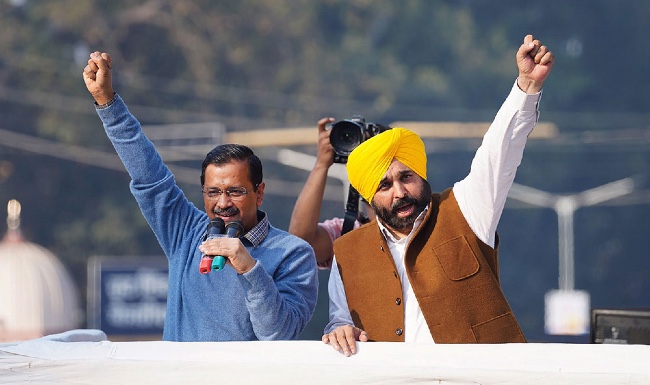 Aam Aadmi Party national convener Arvind Kejriwal on Thursday said his party will be asking the general public as to who should be the party's chief ministerial face in the Punjab Assembly polls even as he indicated that his own preference for the post was state unit president Bhagwant Mann.

Kejriwal, however, ruled himself out in the race. The Delhi chief minister in the presence of AAP's Punjab unit president and MP Mann and party senior leader Raghav Chadha launched a mobile number on which people can give their feedback by 5 pm till January 17 by recording their voice, sending SMS or WhatsApp as to who among the party leaders they want to be declared as the chief ministerial candidate.

"No, Arvind Kejriwal is not in this race, let me clarify I am not in it," Kejriwal said.  Kejriwal said though he wanted Mann to be declared as CM face, but the latter insisted that the people of Punjab should make this decision. "Bhagwant Mann is my younger brother, he is AAP's tall leader. I said Bhagwant Mann should be made, but he said people should be asked first. He said the practice of deciding the name of the CM candidate behind closed doors should be stopped," Kejriwal told reporters here.

Mann said when he was told that his name will be declared as chief ministerial face then the Sangrur MP told Kejriwal that the "people should be asked whom they wish to see CM amongst the party leaders". The Delhi chief minister said this may be for the first time in independent India that a party is asking people who should be the party's CM face.

"On mobile number 7074870748 the people can call, send message or WhatsApp and the party leader whom majority people will like will be announced as the AAP's choice for the CM face," said Kejriwal. "The mobile number will be open till 5 pm on January 17. Based on the response of people, the AAP will declare its chief ministerial candidate," said Kejriwal.

Replying to question, Kejriwal said, "My personal choice is not important, but what people of Punjab say, the party will announce the name of that candidate". "We want to give good candidate, who is liked by people. We have left the decision on three crore Punjabis now," he said. Punjab goes to polls on February 14.