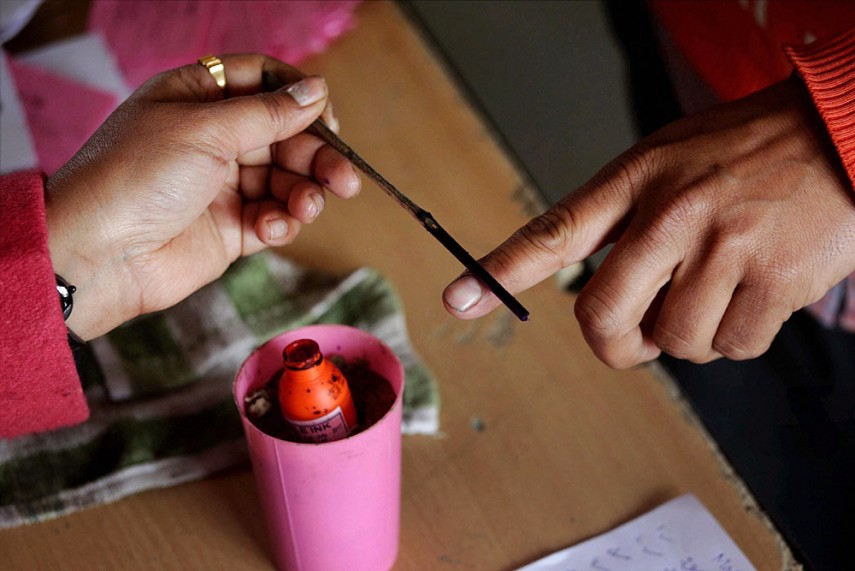 Around 52 per cent of the total 1.98 crore electors have exercised their franchise till 4PM to seal the fate of 1,145 candidates in the high-stakes Punjab Assembly elections while Goa crossed 67 per cent in terms of voter turn out.

In Punjab, a technical snag was reported in voter-verified paper audit trail (VVPAT) machines in Majitha and Sangrur, the spokesman said, adding that the matter had been referred to the Election Commission .

The voting started around 45 minutes late at two polling booths in Jalandhar and Amritsar due to technical glitches in the Electronic Voting Machines (EVMs).

Punjab minister Bikram Singh Majithia was unable to cast his vote in the morning due to the technical snag in EVM at polling station number 35, Ward number 5 in Majitha constituency in Amritsar district.

"Seeking my mother's blessings before casting my vote. Let this be a new dawn for Punjab!," Amarinder tweeted.

Cricketer Harbhajan Singh along with his mother Avtar Kaur also exercised their franchise.

The polling for 117 Punjab assembly seats is being held in a single phase amid tight security.

Shiromani Akali Dal (SAD) has fielded candidates in 94 seats while its ally BJP has nominated candidates in the remaining 23 seats. Congress is contesting alone on all seats.

AAP, which is contesting the state polls for the first time, has fielded candidates in 112 seats while its ally Lok Insaf Party, led by Ludhiana-based Bains brothers, has fielded nominees in five seats.

Over 200 companies of paramilitary forces have been deputed for the fair conduct of polls.

The total number of candidates in the fray include 81 women and a transgender. The polling commenced at 22,615 polling stations in the entire state.

While 84 Assembly seats are of general category, 34 are reserved. (MORE) Speaking to reporters after casting his vote at Lambi,

89-year-old five-time Chief Minister Parkash Singh Badal said, "I have 70 years of experience and have fought for Punjab and India. This is a small battle."

His comment came when asked about the electoral battle turning into a triangular contest this time with the entry of Aam Aadmi Party.

"We will have a bigger win than last time. AAP will finish at third spot," Sukhbir Badal claimed.

"People will vote for development, peace and communal harmony. AAP is a pack of criminals," he added.

Punjab Congress president and party's chief ministerial candidate Amarinder Singh said his party was leading in the state and was set to form the government.

The senior Congress leader, who is contesting from Lambi, said he would defeat Chief Minister Parkash Singh Badal in the latter's turf.

"This time three major parties are in the fray. I wish that whoever wins keep Punjab's interests above all," cricketer Harbhajan Singh told reporters in his hometown Jalandhar. He also appealed that more and more youth should come out to cast their votes.

Sidhu, who along with his wife Navjot Kaur cast his vote, said, "People of Punjab will give a gift to Congress Vice President Rahul Gandhi by ensuring party's victory here and its revival in the country."

"Truth will prevail in Punjab...From this place Congress flag will start floating," he said.

Amritsar Lok Sabha seat fell vacant following the resignation of Amarinder Singh to protest the apex court verdict on Punjab's river waters. The voter strength in this seat is over 14 lakhs.

Union Minister Harsimrat Kaur Badal  exuded confidence that the SAD-BJP would again form the government in the state as she hit out at Congress and AAP for making "false promises" to lure voters.

"With the grace of God, our (SAD-BJP) government will again form the government in the state as our government always worked for the state's progress and development," Harsimrat, wife of Deputy Chief Minister Sukhbir Badal, told reporters after casting her vote in Lambi.

Hitting out at Congress and Aam Aadmi Party, she said, "They (Congress and AAP) were busy making false accusations against us and both of them will bite the dust".

Prominent among the candidates in fray for the Lok Sabha seat are BJP leader Rajinder Mohan Singh Chhina, who is up against Congress' Gurjit Singh Aujla and Aam Aadmi Party's Upkar Singh Sandhu.

For the Amritsar Lok Sabha by-poll, 35 per cent polling has taken place so far, an election office spokesman said here.

The counting of votes for the state polls and Amritsar Lok Sabah by-poll will take place on March 11.