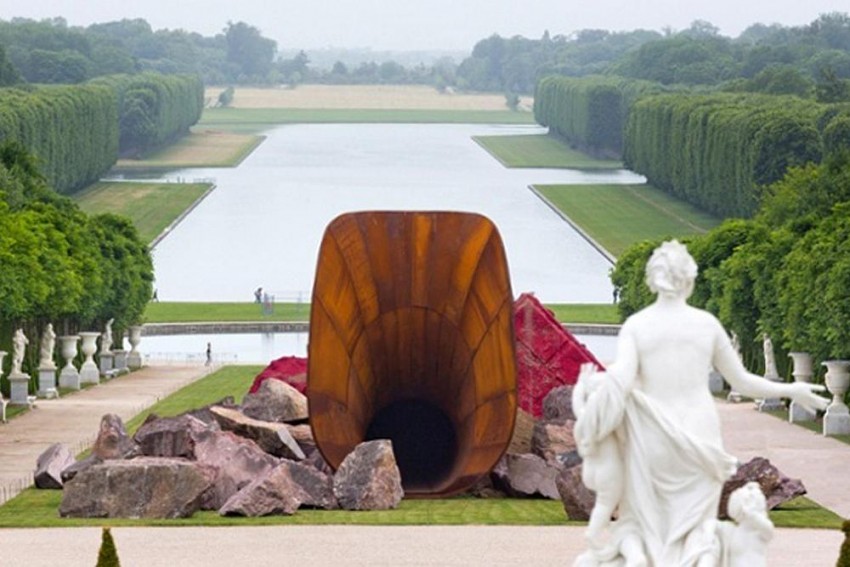 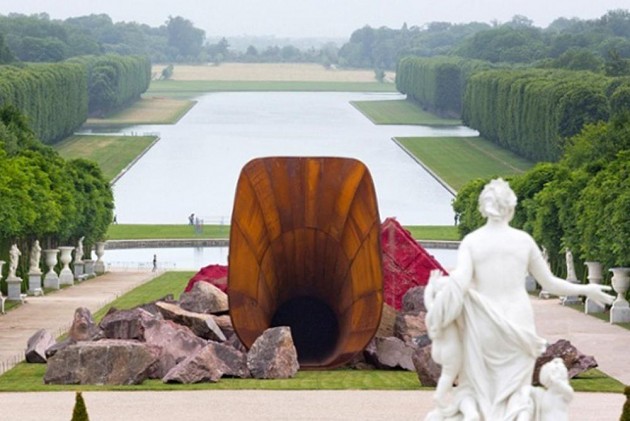 "I never said this work was the Queen's Vagina. Others have called it that. I certainly mentioned the word vagina. I don't see why it is problematic. We all have one — or we all have something," said Anish Kapoor the world renowned, Indian-born British sculptor who has caused a furore in France with his latest work, a funnel-like structure in the gardens of Versailles Palace.

Inaugurated on Tuesday, 9 June, the monumental metal sculpture shaped like a gaping tunnel has created a bataille royale among French critics. Some have hailed it as a bold new oeuvre that challenges the disciplined, geometric order of the gardens designed by Le Notre and Mansard in the 17th century, while others have denigrated it as "an insult to French cultural and historic heritage".

The usually mild-mannered Kapoor appeared ruffled as he talked to journalists about the controversy, refuting charges that the sculpture, whose real title is Dirty Corner, is in fact a commentary on the absolute power wielded by the last French queen, Marie Antoinette who was publicly guillotined in 1793. " Versailles has a very strong historical charge. I submit that this view is a perspective on power. And we must allow the opening of new perspectives, not close the conversation. What do we want? That Versailles remains immutable, as it was, without a single contemporary object? I feel that on the contrary, this helps us understand Versailles," Kapoor said.

Several residents of Versailles, a deeply Catholic, conservative town that resolutely votes for the right election after election, the overt sexuality of Kapoor's work has shocked and outraged. Conservative right wing leaders have waded into the controversy. Robert Menard, the Mayor of Beziers, an outspoken anti-Muslim and anti-immigrant extremist who, surprising as that may appear, was one of the founders of Reporters Without Borders, an NGO militating for press freedom tweeted: "Contemporary art continues to disfigure our heritage", while Alain Escada, President of CIVITAS, an extreme right-wing, integrist Catholic organisation said: "It is unacceptable that France's historic heritage serves the cause of these turds, that too with taxpayer's money remunerating these insults to our intelligence."

Leaving aside the polemic, Kapoor treats the subject of history with brio, plumbing the depths of what lies behind Versailles. In 2015, which celebrates 300 years of the Sun King, Louis XIV one of the most powerful and influential monarchs to have ruled France, Kapoor's comment on power appears both way and justified.

A long tube in rusting metal that springs from the earth, opens up to form a huge yawning hole in the seemingly infinite perspective of the chateau gardens. In the strictly laid out Le Notre gardens and the adjoining Jeu de Paume, Kapoor has installed six works of which three are new creations. "The ensemble belongs to a complex mythology, each piece evoking a multitude of interpretations," wrote Alfred Pacquement, the exhibition's curator. It is left to the visitor to invest the space, which offers different formal contrasts — darkness and light, empty and full, feminine and masculine, visible and invisible — with meanings and metaphors.

An installation entitled "Shooting", a corner that houses a bloodied wall and a pile of red rocks that could well represent the bodies of persons killed during the four years of "terror" that followed the 1789 French Revolution, contrasts sharply with the serenity of the surrounding park and gardens. "Descension" a vortex, a swirling pool of water that seems to inexorably suck the visitor to its depths stands as a counterpoint to the chateau's sparkling fountains. A curved mirror, entitled C-Curve reverses the reflection of the gardens, bringing, in a certain sense, "the sun (and by allusion the Sun King) down to earth". Kapoor says he wished "to destabilise the perfect geometry" of the celebrated gardens, to create an illusion of the reversal of power.

Defending the choice of Kapoor and commenting on the work, Catherine Pegard, the President of Versailles said: "Kapoor evokes a history to which we are no longer accustomed, by bringing up Versailles' shadowy past."