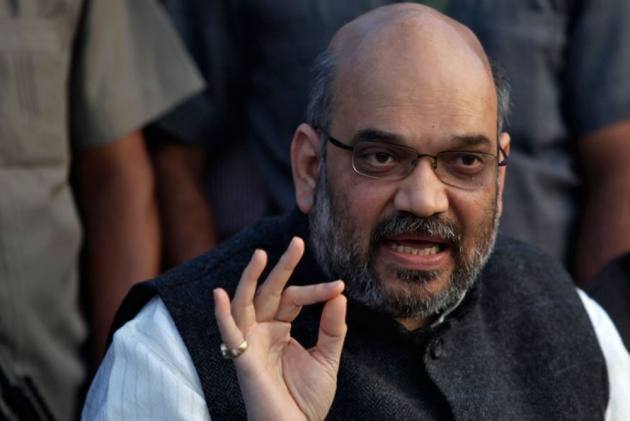 BJP president Amit Shah on Friday accused Congress chief Rahul Gandhi of supporting "urban Naxals" plotting to assassinate the prime minister and asked him to clarify his stand on the issue to people in poll-bound Rajasthan, Madhya Pradesh and Chhattisgarh.

Addressing party workers, Shah also mocked Gandhi, calling him "Rahul baba" and saying he is "day-dreaming" about the Congress' victory in Rajasthan, Madhya Pradesh and Chhattisgarh, BJP-ruled states where elections are due by year-end.

He said "Rahul Gandhi and company" were supporting "urban Naxals" plotting to assassinate the prime minister.

"Shouldn't those who were plotting to assassinate the prime minister be arrested?" Shah asked.

"Rahul baba should make his stand clear on the issue of urban Naxals to the people of Rajasthan, Madhya Pradesh and Chhattisgarh," he said.

He exhorted workers in Chhattisgarh to ensure that the party wins more than 65 seats in the 90-member assembly in the state and the Congress is decimated. Anything below the target of 65 seats should not be considered a win, the BJP chief said.

The saffron outfit currently has 49 MLAs in the state, where it has been in power since 2003.

Mocking Gandhi for predicting a Congress win in the three poll-bound states, Shah said, "Rahul baba is dreaming in broad daylight with his eyes open."

The BJP chief also highlighted the achievements of the Narendra Modi government in the last four years.

"Since 2014 when Narendra Modi became PM, the Congress has lost each and every state election. You (Rahul) ask us what the BJP has done in four-and-a-half years..Our government is working for the poor, youth and farmers who were neglected during your family rule. When Pakistan-based terrorists attacked us, (then PM) Manmohan Singh remained quiet. But, under Modi, our security forces conducted surgical strikes after Uri attack," Shah said.