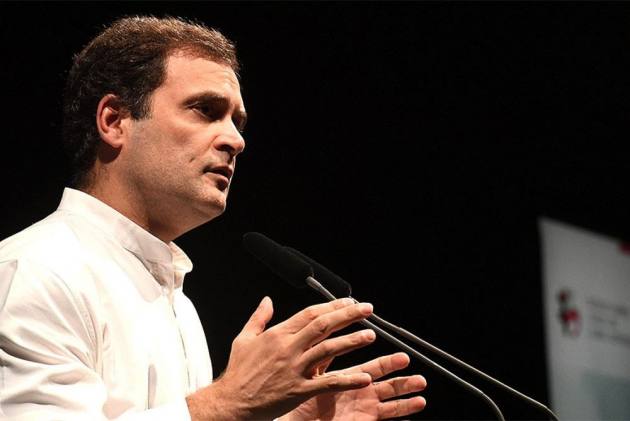 In a double-barrel attack, Congress President Rahul Gandhi on Thursday called demonetization a scam intended to benefit "15-20 crony capitalist friends" of Prime Minister Narendra Modi and accused him of lying in the Rafale deal.

Gandhi, who addressed a hurriedly called press conference at the AICC headquarters, alleged that demonetization was a deliberate attack on the people aimed at helping the richest Indians and the most corrupt people to convert their black money into white.

Latching on to the RBI report of Wednesday that said that 99.3 per cent of demonetized money had come back into the system, he questioned the rationale behind the decision to cancel all Rs 500 and Rs 1,000 notes suddenly in November 2016.

None of the stated objectives like elimination of black money and fake currency, abolition of corruption and curbing terrorism had been achieved, he said.

"Demonetization was not a mistake. It was an attack on you. You were attacked with an axe. Do not be under any illusion. It was not a mistake. This was to destroy you deliberately and open the way for big businesses like Amazon," he said in reference to small and medium businesses that were hurt the most by the note ban.

Accusing Modi and Finance Minister Arun Jaitley of destroying the economy, Gandhi said the NPAs have touched over Rs 12 lakh crore under NDA against Rs 2.5 lakh crore during UPA which was manageable.

"Why did he (Prime Minister Narendra Modi) do it (demonetization)? His 15-20 big industrialist friends had accumulated NPAs to the tune of thousands of crore. So through demonetization your (common man's) money was taken out of your pocket and put directly in the pockets of the country's biggest crony capitalists," Gandhi told the media.

He said Modi's "friends" turned black money into white after the note ban.

"For example, a cooperative bank in Gujarat whose Director is (BJP President) Amit Shah exchanged Rs 700 crore in the wake of demonetization. It cannot even be called a jumla, it can be called a scam. The aim was to destroy small businesses and aid corruption.

"Indeed, Prime Minister Modi did what had not been done in the last 70 years... He did it and devastated the economy (through demonetization)."

He said the Prime Minister owed a reply to the people, specially the youths and small and medium businesses over the unrealized objectives of demonetization and noted that it had adversely impacted on GDP growth rate by 2 per cent.

Gandhi said demonetization was "a huge scam" and slowly evidence was coming out and more will come out.

Replying to a question if he would seek an apology from Modi, he said an apology was sought when someone makes a mistake.

"It was not a mistake but a deliberate attack on the people of the country. He paid back those who market him. Crony capitalists do his marketing and he snatches money of people and pays them (back)," Gandhi said.

Stepping up his attack on the Rafale fighter jet deal, he said Jaitley was writing "lengthy"blogs but why was the government silent on the demand for a joint parliamentary committee (JPC) probe into the issue. "Jaitley is scared to ask the PM about constituting a JPC."

He referred to the joint statement issued after Modi announced the Rafale deal which mentioned that the aircraft would be delivered on the same configuration as had been earlier approved by the Indian Air Force.

"If the configuration is going to be the same, why is the man lying?"

He said the Prime Minister was not taken seriously any more on promises like he made to put Rs 15 lakh of money in every Indian's bank account. "But when he lies, we catch him."

"There is a huge list of unfulfilled promises and lies. His words hold no meaning anymore."

He alleged that the BJP opened offices in several parts of the country during the note ban.

Answering a query, he said the entire party was receiving legal notices from industrialist Anil Ambani over its allegations on the Rafale deal but the party was not worried.