Earlier, Karnataka Congress president had said that it is not a form of soft Hindutva but inclusive Hindutva is what the party follows. 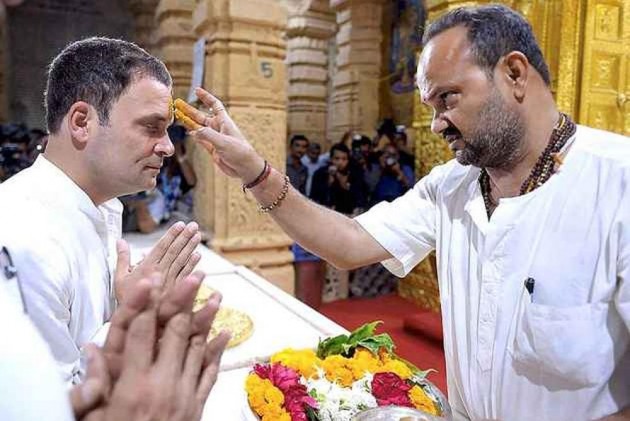 Congress chief Rahul Gandhi is set to visit a Hindu temple, two Lingayat religious centres and a Muslim dargah in the poll-bound Karnataka during his first-leg of campaign tour in the state from February 10 to 13.

According to a report by the Indian Express, Gandhi is scheduled to tour the districts of Bellary, Koppal, Raichur, Yadgir, Gulbarga and Bidar, in northernmost parts of the state, which is mostly inhabited by the Lingayats, the single largest community in Karnataka.

Earlier, Rahul Gandhi’s temple visits in Gujarat during the assembly elections campaigns had invited sharp reactions from the rival BJP, who dubbed it as Gandhi’s “temple tours.”

BJP general secretary-in-charge of Gujarat, Bhupender Yadav, had targeted Gandhi by saying, “Star campaigner of Congress Rahul Gandhi is visiting temples & offering prayers which is good as it is a part of Indian culture. However, this must come naturally to a person and not only during elections.”

Congress leader Mani Shankar Aiyar , who was suspended from the party during Gujarat elections for his "neech" remark against Prime Minister Narendra Modi, recently defended Rahul Gandhi saying that the latter’s temple visits cannot be seen as communalism. "If Rahul Gandhi regards himself and his family members as 'Shiv Bhakts', what is wrong in that?," he had asked.

While announcing Rahul’s tour programme in Karnataka, state Congress president G Parameshwara had said: “There are no scheduled visits to temples during the first (leg of) visit. But if he is invited in an informal way to participate in a temple ritual during his visit, he will participate. It is not a form of soft Hindutva but inclusive Hindutva that we  follow.”

In Karnataka, the Lingayats, followers of 12th century poet-saint Basaveshwara, are currently engaged in an internal battle for separation from Hindu religion. According to reports, this is seen to have received subtle support from Chief Minister Siddaramaiah’s Congress government in the state. Lingayats are known to be a major support base of the BJP. BJP’s chief ministerial candidate B S Yeddyurappa belongs to the Lingayat community.

In Karnataka, Gandhi will visit Huligamma Temple, a religious place more than a thousand years old in Huligi village, Gavisiddeshwara Mutt, an 800-year-old Lingayat monastery in the same district, Khwaja Bande Nawaz dargah in Gulbarga district and Anubhava Mantapa at Basavakalyan in Bidar district,  another seat of religious thought and reflection for the Lingayat community.