Advertisement
Home National
On Board AI-1

'I would be very happy to work for the Congress party under the leadership of Mr. Rahul Gandhi,' says the PM as he also keeps open the question of an alliance with Mamata Banerjee

Prime Minister Manmohan Singh: The Group of 20 is, on the international plane, an essay in persuasion. In that context, I believe we had a very successful G 20 meeting. The Leaders’ Declaration and the St. Petersburg Action Plan are in line with the position we had advocated in the meeting. You have seen the documents. So I won’t attempt to summarise their contents, but I would be happy to answer questions. We also had a very useful BRICS meeting. The Leaders confirmed that agreement has been reached on the 100 billion dollar Currency Reserve Arrangement. There is also progress on the BRICS Bank which will lead to a concrete proposal by the next BRICS meeting. On the sidelines of the Summit, I had a brief discussion with the Prime Minister of Japan and the Deputy Prime Minister and Finance Minister of Japan and we have agreed to raise the limit of the swap arrangement between our two countries from 15 billion dollars to 50 billion dollars. This is something by way of a second line of defence for our currency.

What are the important take-aways for India from the G20?

As I said, G20 is at the international level an essay in persuasion about good practices. The Leaders’ Declaration and the Action Programme reflect our concerns that the world economy is not in good shape, that all countries who have influence in global affairs must work together to revive the growth process. In particular, we have been arguing at Los Cabos that infrastructure development is a commodity which can contribute to revival of growth as well as acceleration of the development process. And that is reflected in the Action Programme and also in the statements that were made by the President of the World Bank that they are working on a world infrastructure financing facility. If that comes about it will certainly help us greatly.

What kind of role do you see BRICS playing in the world economy and India’s contribution to it as well?

BRICS is an important factor in the world economy because China, Russia, South Africa, Brazil and India together command a significant proportion of the GDP and trade of the world, and therefore, whatever happens inside or to the development process in these countries has an influence all over the world. I mentioned that as concrete acts the BRICS countries have agreed to a 100 billion dollar currency reserve arrangement. There is also an agreement to start a BRICS bank with 50 billion dollars and the concrete proposal is now being finalized and will be brought before the next Summit of the BRICS.

The Japanese swap enhancement to 50 billion dollars and 100 billion BRICS contingency reserve fund, do you think together these two will have a calming effect on the markets of Indian currency and what should be done domestically to take care of current account deficit?

On the margins, certainly, what we have agreed with Japan will help, but ultimately, we have to get the fundamentals of our economy in robust health. The last week, Parliament has passed some important legislation, economic legislation. That will also help to revive confidence and we have to work to ensure that the fiscal deficit does not exceed 4.8% and whatever we can do to contain the current account deficit, will be put in practice. 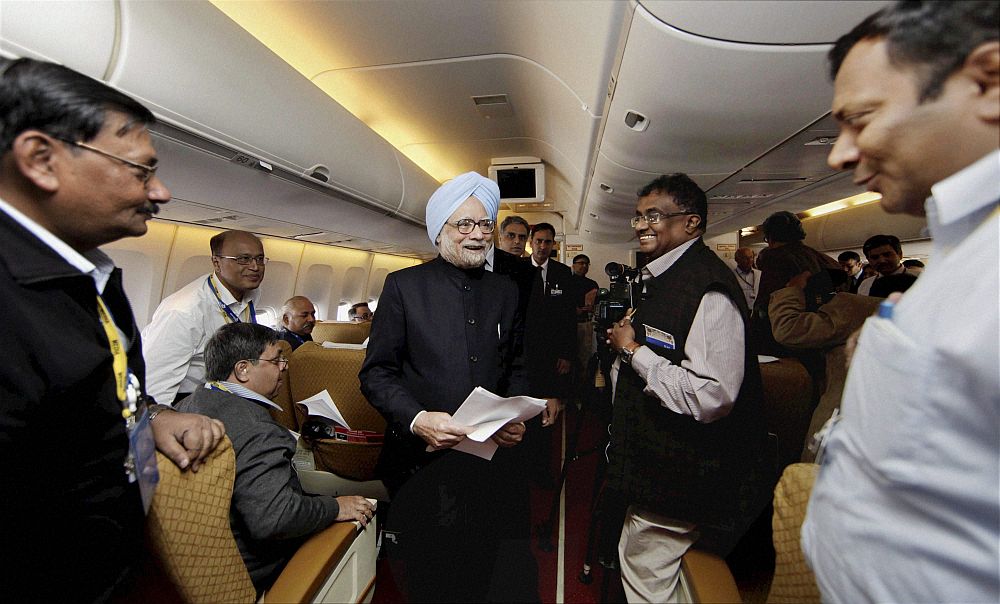 This is a question on the ‘unconventional monetary policy’ followed by different central banks and how their impact should be tackled. The final declaration Clause 14 seems to suggest that Central Banks across the world of advanced economies will continue to be dictated by domestic considerations including price stability? Was your point of view therefore a point that found resonance within the G20? And what can we expect as far as rollback tapering is concerned?

There was widespread appreciation of the point that I made about the unintended consequences of unorthodox monetary policies being pursued by countries like the United States and the Euro Zone. But, I also pointed out in my own speech that I don’t see immediate concrete action because Central Banks are the creation of their domestic legislations, some value their independence, some also have a limited mandate. But overall there was general appreciation that when it comes to consultations on global economic policies, macro-economic policies, for example, in the mutual development process, the countries should be discussing how monetary policies are being shaped, what are the concerns and how we can soften the impact on other countries. So I would say that as a general idea, there was widespread appreciation and in fact most developing countries’ leaders made the same point that I made and I expect that as an essay in persuasion it was a good idea and good ideas are scarce in the world. I do believe sooner or later it will catch attention.

How will the Indian economy and markets benefit from your forthcoming visits to the United States, ASEAN, Russia, and China?

I have important visits lined up later this month to the United States, then next month to Russia, and there are also visits planned to ASEAN and then to China. All these countries are important trading partners, and therefore, whatever we may do in these meetings, they create a climate conducive to accelerating the processes of cooperation. And I, therefore, sincerely hope that my discussions in Washington, in Russia, in China, in Brunei, would certainly help to create, at the margin, a better environment for cooperation between us and these countries in matters relating to trade, in matters relating to investment. And certainly, I think, the visit to the United States, if we do the right things before going there, they will have an influence on the climate for capital flows from the United States to our country.

Exactly 3 weeks from now you will be in New York for the UNGA, the possibility of a meeting with your Pakistani counterpart has been a matter of intense speculation. What are the prospects of such a meeting taking place on the sidelines of the UN General Assembly in New York, specially since there is a view in India that you should avoid meeting Mr Sharif?

I have always maintained that we can choose our friends, but we have no choice with regard to our neighbours. And, therefore, under normal conditions, I would be happy to meet with Prime Minister Nawaz Sharif, whom I respect, who has said the right things about how relations between our two countries should evolve. But, there are certain harsh realities on the ground -- if the terror acts do not stop; if those who voice terrorist thoughts move about freely; if there is no significant progress in bringing the culprits of the Mumbai massacre to book-- that I have to factor in before arriving at a final decision.

A woman writer was recently killed in Afghanistan. Does this once again prove that Taliban is raising its head? How have Afghan forces not been able to contain Taliban?

I was very sad when I heard about the attack on and killing of Sushmita Banerjee. It is a very sad development. She was living in Afghanistan for a long number of years. She was engaged in important social work. So I feel very sad that such a noble person should have been the victim of the Taliban’s wrath. Well, obviously, Afghanistan still is plagued by the Taliban menace. The Government and people of Afghanistan, ultimately, will have to make up their minds, whether the Taliban philosophy, particularly with regard to the role of women in society, is the theme which should decide their approach to life.

You have charged the chief opposition of obstructing Parliament, and hurting the economy. Do you believe that you yourself have sufficiently answered the many questions that the Opposition has raised about your Government and about you in person?

I try to answer all questions that have been raised. I have no desire to hide anything from Parliament, whether it is the coal matter, or other matters. I have been as forthright as I can. I made a long statement on the coal matters, in the previous session of Parliament. I was not allowed to read that statement, but I did issue that statement. It is a public document. So I am an open book.

Will you go in for an alliance with Mamata Banerjee in the forthcoming Parliamentary Elections in 2014?

In politics there are no permanent enemies and permanent friends. And in many ways, a week in politics is sometimes an unusually long period of time. So I don’t rule out alliances. Mamata Banerjee was a very respectable member of the Congress party at one time. As the leader of the Trinamool also, we were very happy to have her in our Government. We would very much like like-minded, secular-minded persons should work again to give our country’s polity a thrust in favour of secular elements.

Do you think it is possible for you to go ahead for a third term, because many in the Congress party would like to see Rahul Gandhi to lead the party. Also, why don’t you go ahead and say you are ready for questioning, as you did on the 2G issues?

I have not prevented anybody from looking at my conduct. As far as your first question is concerned, I have always maintained that Rahul Gandhi ji would be an ideal choice for the Prime Minister’s position after the 2014 election. I would be very happy to work for the Congress party under the leadership of Mr. Rahul Gandhi.

Is Government going to consider separate Vidarbha or division of Maharashtra with Telangana issue?

There is no such proposal under consideration.

(Note: In some cases, questions have been abbreviated).