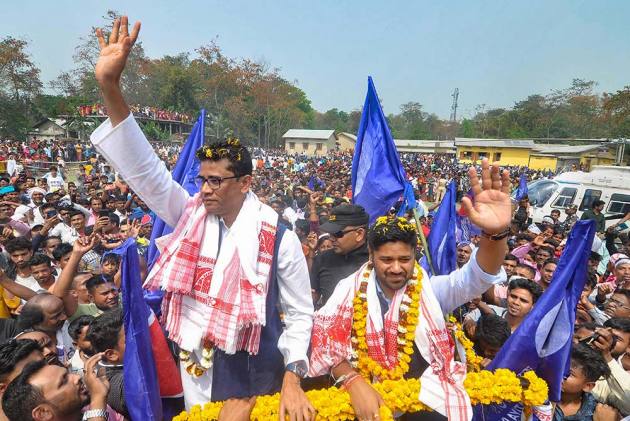 On Thursday, Opposition Raijor Dal (RD) and Assam Jatiya Parishad (AJP) claimed that the government's decision to abolish the compulsory language paper in state civil services examinations was being done to infuse "RSS-minded" people from outside into the administration and termed it  as "dangerous".

Addressing separate press conferences, the two political parties said they will not accept the decision of the Assam Cabinet and demanded its immediate withdrawal. "The Cabinet decision is a sad development for Assam. It is a dangerous step. It will make Hindi-speaking people from the RSS and north India eligible for the Assam civil services exam. The BJP government aims to bring such people into the state administration," RD president Akhil Gogoi said.

He claimed that the previous BJP dispensation in Assam had appointed a person from Bihar as a teacher in a school at Majuli though he did not understand Assamese. "We cannot accept people from outside the state to appear for APSC exams. We strongly oppose the Cabinet decision ," Gogoi said. Echoing similar views, AJP president Lurinjyoti Gogoi said the government took the step to welcome Hindi and Bengali-speaking people from outside to the state through Assam Public Service Commission (APSC) examinations.

"It is a self-destructive decision by the government. This government had once said that the Assamese language would be made compulsory,” he added. On Wednesday, the Assam Cabinet took a decision of abolishing the qualifying language paper for the state civil services examinations subject to fulfilment of three conditions -- a candidate must be a resident of Assam, his/her name should be registered in the state employment exchange and the candidate must fluently speak either Assamese or other recognised languages of Assam.

Addressing a press conference after the Cabinet meeting, Chief Minister Himanta Biswa Sarma said recognised languages would include Bodo or Bengali or any other tribal language of the state, and also Hindi as many people in Assam speak it. The APSC Rules were amended in 2019 according to which applicants had to appear for a compulsory language qualifying paper in Assamese or associate languages Bodo or Bengali, except for those from Karbi Anglong and Dima Hasao.

Following this, the Manipuri community of Barak Valley had appealed to the government that they should be exempted from appearing in the qualifying paper. The government subsequently passed an order exempting all aspirants from Barak Valley from appearing in the qualifying paper. The candidates of the Brahmaputra Valley then contested this in the Gauhati High Court and the case is still pending. The court allowed the APSC to hold the preliminary exams this year, but the matter is still sub-judice.