The vaccination of Rohingya refugees in Jaipur, who do not have an Aadhar card will begin from June 12, officials said. 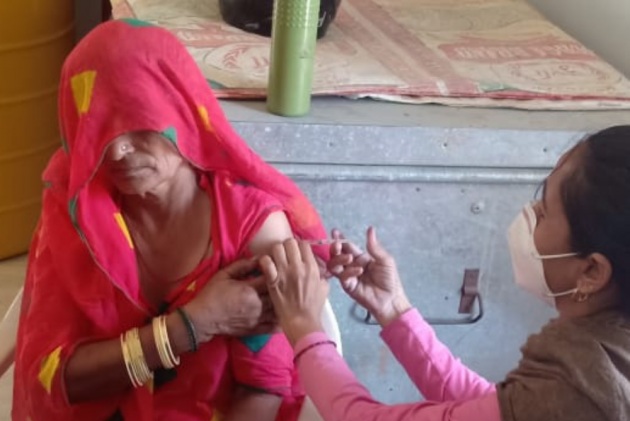 "Following the orders of Rajasthan chief secretary and the health department, on Tuesday we set up a special camp to vaccinate those Pakistani Hindu migrants who do not have Aadhar cards. So far, we have vaccinated 18 such migrants falling in the age group of above 45 years. We will soon vaccinate the rest, who fall under the category of 18-45 years," Barmer collector Lok Bandhu told Outlook.

The news of the vaccination camps has brought a cheer to the refugees, living in the border districts of Rajasthan.

For 55-year-old Lehar Bai, it was a huge relief to get vaccinated after waiting for four months for the jab. She along with her husband Bhag Singh visited the vaccination centre located in Nagar Palika to get the lifesaving jab. "We were scared to go out for the last two months. Today, apart from feeling respected, I am also feeling like a human being, who has the right to live. Now we hope the vaccination drive also covers the rest of us who were left out,” Lehar told Outlook.

She arrived in India in 2007 from Kset Singh ka Gaanv in Umerkot. She now lives with her family of 10 in Danji ki Hodhi village located in Barmer district.

Similar sentiments were expressed by Roop Singh Sodha (65) and his wife Samad Kanwar (60), who hail from Umerkot in Pakistan and are presently living in Barmer since 2006.
"The pandemic has been very stressful as so far, we have been unable to receive the vaccine. But now we are happy to know that that Indian government has taken cognizance of our appeal and decided to vaccinate us,” said Roop who lives with his family of 12.

In Barmer, there are around 1,500 Pakistani Hindu migrants who are yet to acquire citizenship. Of them, 500 are above 18 years, eligible for the Covid 19 vaccination.

And while the vaccination drive has been opened up to include these migrants in Barmer and some parts of Udaipur, Jodhpur which houses has 90 per cent of all the state’s Pakistani migrants is yet to vaccinate these migrants.

"Despite the Rajasthan HC asking officials to vaccinate Pakistani Hindu migrants, authorities in Jodhpur are yet to make arrangements. Irrespective of ethnicity or nationality no one should be deprived of the jabs. Everyone deserves to live with respect,” Hindu Singh Sodha, president of the Seemant Lok Sangathan told Outlook.

As per the activists, around 70 per cent of these migrants do not have an Aadhar card which makes them ineligible for vaccination. Earlier, Outlook had reported on the exclusion of Pakistani Hindu migrants from the vaccination drive.

In Jodhpur, these migrants are living in ten settlements spread across the district. Speaking to Outlook, Dr. Balwant Manda Chief Medical Officer of Jodhpur, who is also looking after the vaccination process said, "The inoculation of those Pakistani Hindus who have an Aadhar card was started in April. But after the direction of the High Court, we have now also started vaccinating those who have citizenship but not an Aadhar card. However, inoculation for those who do not have citizenship or Aadhar Card and are staying here on a long term visa will start in the near future.”

Vaccination for Rohingya refugees to begin from June 12

As per records, Jaipur has around 390 Rohingya refugees living in different settlements. In Hasanpura, Hatwada, there are around 260 Rohingyas, whereas in Sodala there are around 50-60 and a small settlement in Kanota has 11 refugees while the Sewapura kachra plant houses eight Rohingya families.

These settlements are mostly slums with hardly any hygiene or health care facilities, making it difficult for them to adhere to Covid-19 precautions. And most importantly none of these refugees have been able to register for vaccines as CoWin requires an Aadhaar card for registration.

Amid a scarcity of medical resources, adverse impact on livelihood due to Covid-induced lockdowns, shortage of vaccines and perceived apathy from the government, Rohingya refugees living in Rajasthan are feeling hopeless. Earlier, Outlook had also reported on the situation of Rohingyas, who were denied vaccines due to lack of Aadhar card and other documents.

Meanwhile in Jaipur, the vaccination drive for the homeless kicked off on Monday. The in-charge for vaccination in Jaipur south, Chief Medical Officer Dr Pushpa told Outlook, "Around 96 people at a beggar home in Mansarovar have been vaccinated. Eight members of Mahila Sadan Pratapogarh have also been vaccinated at the community health centre in Sanganer and some in the shelter home at Apna Ghar in Bassi. All of them have no Aadhar card. We are slowly including everyone in the vaccination drive.”