Rajat Gupta’s Travails Are Far From Over

The former Goldman Sachs director is appealing the convictions, but generally appeals don’t go in favour of the defendant unless the appellate court finds an egregious malfeasance of justice. A failed appeal can be doubly damaging: 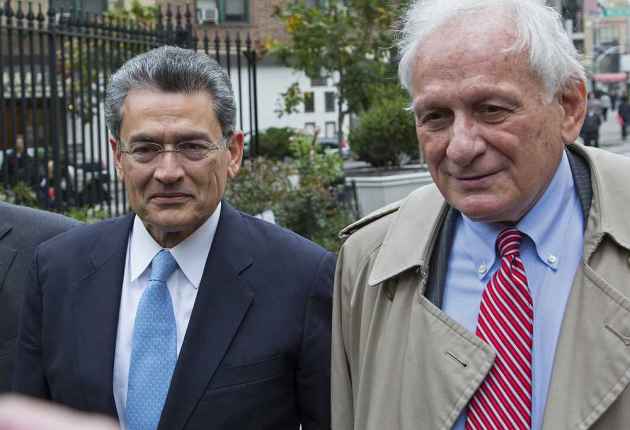 All that remained were the tears of Rajat Gupta’s family.

Gupta's saga ended – for the moment at least – at the U.S. Federal Courthouse as U.S. District Judge Jed S. Rakoff sentenced the disgraced former director of Goldman Sachs & Co. to two years in prison and a $5 million fine.

Some of those tears may well have been tears of relief. The former managing director of global consulting firm McKinsey & Co, faced up to 25 years in jail for his convictions on three counts of securities fraud and one count of conspiracy.

The proof of Gupta’s guilt “was not only overwhelming, it was disgusting,” Judge Rakoff said in handing out the sentence. Gupta sat expressionless but looked “haggard and strained” the New York Times reporter Peter Lattman wrote. His daughters were in tears.

As we now know, Goldman Sachs would have collapsed the night Warren Buffett made his $5 billion investment. Others didn’t know then, but Goldman’s board certainly did. There is no way that Gupta was unaware he had critical non-public information. The jury said he told Raj Rajaratnam. And Rajaratnam made $900,000 overnight.

Gupta’s travails are not over. He is appealing the convictions, but generally appeals don’t go in favour of the defendant unless the appellate court finds an egregious malfeasance of justice. A failed appeal can be doubly damaging: It will affirm Gupta’s guilt and it will expose him to enormous legal bills. Under Goldman Sachs’ indemnity plan for directors, the investment bank has reluctantly paid some $30 million in legal fees on Gupta’s behalf. If he loses the appeal he will become liable for all legal costs.

Worst of all is the damage to the reputation of Gupta, McKinsey and other entities in which he has been involved. McKinsey, for example, thrives on its reputation for client confidentiality. If its former Managing Director and at least one other partner betrayed that trust, for how long have they been doing it? And who else has done so?

The trashing of McKinsey’s reputation began early last year when the Securities and Exchange Commission launched an “administrative proceeding” against Gupta. On March 1, 2011, CNBC.com Senior Editor, John Carney, pointedly noted that Gupta had intimate inside information of P&G’s $61 billion bid for Gillette in 2005. Gupta, Carney said, had conceptualised the deal with P&G chairman, A.G. Lafley. Before the bid was announced, options on Gillette’s stock price shot up, netting some traders one-day profits of 500%. Carney is careful to say that Gupta denied any charges but the implication is clear that insider tips existed at McKinsey years long before 2008.

The news is not totally bad for Gupta. White collar criminals aren’t often shipped “up the river” to Sing Sing maximum security prison. They are usually sent to one of the “Club Feds” – minimum security camps with tennis courts and ample visitation. Gupta is probably headed to the medium security Federal Correctional Institution in Otisville, NY, near the Pennsylvania and New Jersey borders.

But prison is still prison. Rajat Gupta will enter jail a convicted felon and, even after a short term, will emerge a felon, That he was sentenced at the end of Durga Puja, Bengal’s holiest festival, makes the pain deeper for this devotee of the Bhagavad Gita.

Rupee Falls 4 Paise To Close At 73.68 Against The US Dollar