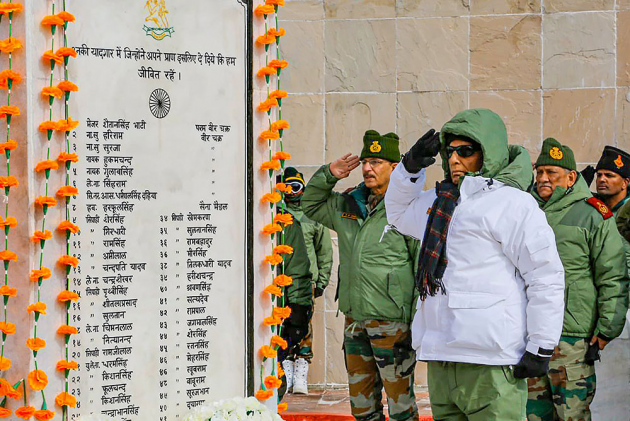 Union Defence Minister Rajnath Singh was in Ladakh on Thursday to inaugurate the renovated Rezang La memorial in Chushul, on the anniversary of the battle of Rezang La during the 1962 War with China. The memorial, Singh said, is an “epitome of passion, determination and fearless spirit of the country’s brave hearts”.

During his visit, Singh made a short speech in which he paid tributes to the 114 Indian soldiers who had died defending their position at Rezang La on November 18, 1962. This prevented the Chinese from moving towards Leh during the war. The memorial in Chushul is very close to the India-China border at an altitude of over 15,000 feet.

Not all appears to be well in Ladakh, however, where the defence minister was met with concerns from locals regarding the "war-like" situation on the state's borders. In a letter addressed to Singh on Thursday, Konchok Stazin, representative of the people from Chushul for Ladakh Hill Development Council, appealed to the government to create an alternate residence for people in border areas.

“What we have been observing since a year at the border is unprecedented and it is a completely war-like situation at borders," the Chushul councillor Stazin wrote in his letter to the Defence Minister. Seeking alternative residence for border areas in Leh city, Stazin wrote, “We have never seen such a tense situation at the border. This is creating insecurity among locals living at those areas". He further added that in order to provide safe shelter to residents in case of escalating tensions, locals needed land in Leh keeping in mind the safety and security situation of the border areas.

Addressing Singh, the Councillor wrote, "We the people of Chushul constituency, zero borer villages, are indeed privileged and pleased to welcome you to this remote region of Ladakh. As we all are aware, without a strong border infrastructure and modern amenities, the progress of mainstream society doesn’t hold any value. In this regard, I would like to flag critical issues, for constituencies of your good office".

Stazin also said that mobile connectivity, universal internet coverage of all border villages is the skeleton of a smart policy of any country. "Sadly, India, our country, is yet to realise this basic principle of border security. I have seen that other countries like China, Nepal, Pakistan and Bangladesh are far better than India in terms of communication facilities in their border villages. Cities have multiple internet service providers, whereas border people have to move towards Leh to get mobile and internet networks. Therefore we request the intervention of your good office for sanctioning of 4G mobile services,” the letter reads.

The councillor also urged the government to connect Durbuk and other areas to Changthang and the northern grid for an uninterrupted continuous reliable supply of electricity.

The letter also called for the laying of optical fibre cable at the border. Many villages in the Chushul constituency remain unconnected with the OFC. Telecom service providers remain disinterested in providing services to the border villages despite multiple requests, the letter said.

The councillor also mentioned that  Maan-Pangong and Chushul are revenue villages that comprise seven main hamlets. They earn their livelihood through their livestock by producing the world’s finest Pashmina, Yak wool, Cheese and milk. “The Chinese have given unfettered freedom to their nomads to move freely. They (Chinese), very often, use their nomadic community to transgress on our land in a step by step approach. Sadly, the movement of the nomads belonging to this side of the border is restricted by the Indian army. The nomads of the Indian side are soldiers without uniforms. The Indian army must trust them by not restricting their movement relating to grazing and collecting firewood.”

In the letter, the Chushul representative also demanded the opening of a trading point with China at Chushul as it is one of the designated Border Personal Meeting (BPM) points between the two nations' armies. Two previously recognized trading points with China already exist - one in Lipulekh in Uttarakhand and the other in Nathu La in Sikkim. These points were aimed at boosting the local economy in border villages. "Opening the trading point in Chushul will help foster economic relationships with the neighbours as well as help to boost the local economy,” the letter adds.