Rajnath Singh: India Will Manufacture 90 Percent Of Defence Products It Needs By 2024-2025

"By 2024-2025, we will be achieving the target of exporting defence products worth USD 5 billion as fixed by Prime Minister Narendra Modi. I can assure him that 90 per cent of the defence products will be made in India soon," he said 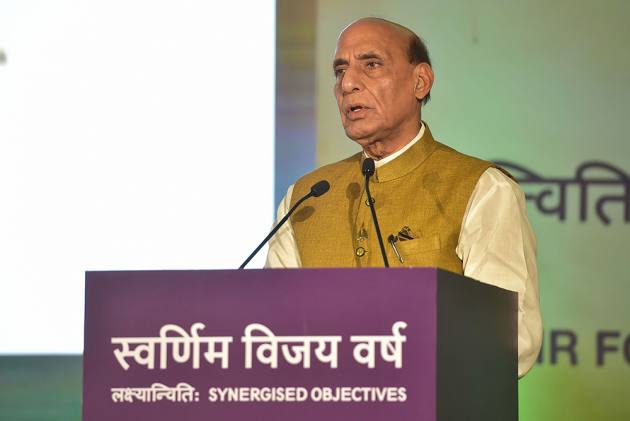 On Friday,  Defence Minister Rajnath Singh said India will soon be manufacturing 90 per cent of the defence products it needs within the country and by 2024-2025, it will also export such products worth USD 5 billion.

"Earlier, 65-70 per cent defence products were imported. Now, as we head for 'aatmanirbharata' (self-reliance), 65 per cent of defence products are made in India. We were known as an importer (of defence equipment) earlier, now we are exporting those to 70 countries," he said while addressing the gathering at the "Rashtra Raksha Samarpan Parv" here.

"By 2024-2025, we will be achieving the target of exporting defence products worth USD 5 billion as fixed by Prime Minister Narendra Modi. I can assure him that 90 per cent of the defence products will be made in India soon," he said. Earlier, Singh paid tributes to Rani Laxmibai and said there was a time when India was counted among the countries buying the largest number of defence equipment in the world, but today, with the efforts of the prime minister, the situation has changed.

Farm Laws To Be Repealed But For Women Farmers, The Battle Has Only Just Begun

In the presence of Modi at the concluding session on the final day of the Rashtra Raksha Samarpan Parv, which began in Jhansi on Wednesday, the defence minister said due to his initiatives for women empowerment, women are being recruited in the Army. He said taking inspiration from Rani Laxmibai, the government is also increasing the participation of women in various fields as well as in the Army.

Singh, who inaugurated the three-day event jointly organised by the defence ministry and the Uttar Pradesh government on Wednesday, had earlier said women's participation has increased in all security forces, including police and the paramilitary forces, since the Modi government came to power in 2014. "When I was the home minister, I had issued an advisory to all the states that a 33-per cent representation should be given to women in security forces. The situation has changed now. In all police and paramilitary forces, the participation of women has increased," he had said.

"There was a time when 65-70 per cent of defence equipment was imported. The picture has changed now. Only 35 per cent defence items are imported and 65 per cent are being manufactured in India," Singh had said. Shedding light on other visible results, he had said defence exports from India had crossed the Rs 38,000-crore mark in the last seven years.