My misgivings about the film started with the cringeworthy “Roop tera mastana” scene right at the start...

My misgivings about Raajneeti started with the cringeworthy “Roop tera mastana” scene right at the start. One fine evening a leftist politician sets aside the daal he is cooking to get sufficiently wet in the rain along with rival politician’s nubile daughter--also his committed follower. Hormones go on a sudden rampage, the unmentionable three-letter act is coyly performed and before you can say “phew” some strange guilt comes to haunt our man and he just walks away from the lady. And from politics. Forever. Seriously serious fellow who takes himself bit too seriously!

Jha uses this abiding wet scene cliché of Hindi cinema very deliberately to sneak in the Mahabharata connect in Raajneeti. Afterall what would Mahabharata be without Karna conception! Point number one why the film fails. The link up with the epic is terribly calculated and stupidly convenient. Instead of a nuanced, layered association as in Shyam Benegal’s Kalyug here it becomes desperate, showy, in-your-face. As though telling the audience: Ok, now count how many times we go the Mahabharata way.

Moreover the power tussle between two political families portrayed in Raajneeti has more Godfather (complete with Don and Michael) to it than pure politics. On top of that, Jha’s approach is sledgehammer rather than subtle. All sound and fury but dig deeper and you get nothing, absolutely nothing that you haven’t seen and known already; in reality and in Bambaiyya films as well. That politics = deceit, ambition, sex, machinations, convenient alliances, tainted funds, murders, sectarianism… Haven’t we been there and seen that in so many, and far finer films? Instead of revealing to us the canny political minds Jha’s focus is on the several shoot-outs, blood and gore. Which could well have happened in a corporate, mafia, or for that matter, any devious family set up. For a film which claims to be “political”, politics is technically just a backdrop. 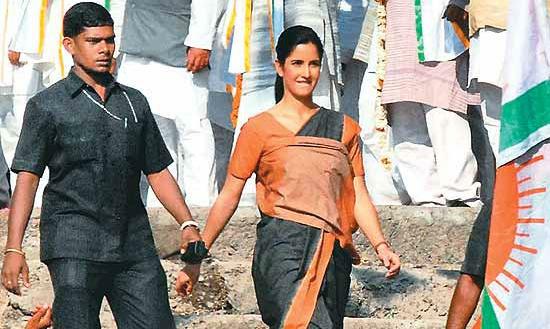 And Jha is lucky that silly Congress leaders fell for his hype trap and kept the film in news on pointless censorship issues. From what we read, the scenes they lopped off didn’t seem to have an overt Congress connect. What we see in the film has no reference to the party either. Save the fair and pretty Katrina Kaif campaigning in cottons, looking every inch a clone of Soniaji-Priyankaji. And they certainly couldn’t get that chopped. So who made a fool of whom and how?

Jha’s canvas and characters are sprawling. And it takes a while to log into their complicated lives. The plot is full of holes and gets terribly unwieldy so much that the second half is a total mess. It had to be because Jha even tries to add a dash of Irish politics where it is totally uncalled for. No wonder the many strands spin out of control making the film overlong, boring and tortuous. And at times an unintentional laugh riot. Like the moment when Arjun Rampal suddenly says that he has always loved his wife Katrina (and they quickly go for the three-letter act so that she can get pregnant the next instance which is what all women in this film are destined to be). Meanwhile the film has never given us a hint of his deep feelings for her. The two wouldn’t have shared the screen for even four scenes so where did this love leap out from? Or when Ranbir, in a supposedly intense scene, tells his ailing uncle that at least the old man would understand his inner compulsions. Well how would he, We wonder? When he hadn’t met the poor man in the interim and we have never witnessed any connect, forget deeper bonding, between the uncle and the nephew.

Every character remains ill-defined. Be it Arjun who moves from a sexy dude to a blood-thirsty Dracula.  Or his younger brother Ranbir whose sudden wily ways have no grounding; they just happen as a matter of revenge. Wish Jha could have shown the interiors of Ranbir’s mind than the exteriors of his one-sided romance with Katrina. Manoj and Nana are promising. But wish there was more of Nana and that Manoj hadn’t been turned into a caricature by the middle of the film. As for Ajay, well he seemed to have stepped out of Omkara straight into Raajneeti. Same gait, expression, body lingo.

As a woman I have my special rant. Ok, women do become toys in the patriarchy of politics, but we also know of women who can play politics very well - and not by just using their bodies as weapons. So why are women uniformally shown as used and abused, voluntarily or otherwise? Just one woman with guts and gumption would have made a substantial difference.

There are other glitches like the lingo. Notice how our Kunti figure quickly lapses into shuddh Hindi when she meets her long lost son Karna. The scene makes you roll in laughter than sympathise with their predicament. In fact Raajneeti didn’t get me involved with any of its characters, their destinies, dilemmas, choices, and decisions. All I saw was persistent tension-filled scenes and heard some menacing music; scenes of individuals confronting each other followed by spectacle of crowds followed by some scenes of the media with their mikes and camera. That seemed to define the structure. And it all reached a visual crescendo in the panoramic funeral scene and then came apart in the violent shoot-out climax.

Elements I liked: the irony of the progeny of the left and the political royalty having to live mistakenly as a Dalit. Now that track alone could have been spun into a textured tale. I loved the title of Ranbir Kapoor’s PhD thesis: “The sub-textual, emotional violence of the 19th century Victorian poetry”. Where did that come from?

And one question I wanted Jha to provide an answer but he conveniently ducked: Where the hell did that leftist leader go after the wet night? And pray what happened to the daal that was simmering?