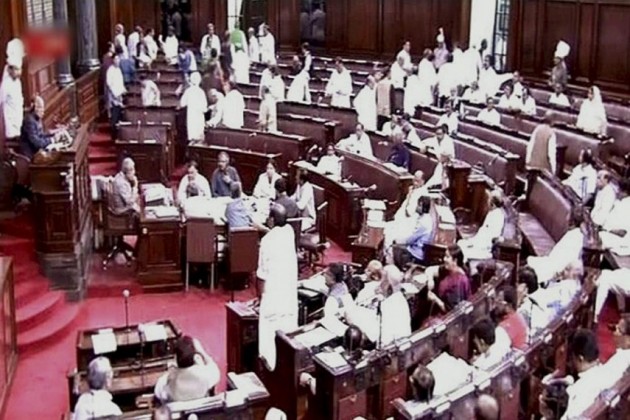 The Rajya Sabha was adjounred twice during the morning session today after opposition members created a ruckus over the PNB scam and constitution of the Cauvery Water Management Board.

Slogan shouting from the Well resulted in proceedings being adjourned first for 10 minutes and then till 1400 hours, which resulted in the Question Hour not being taken up.

While the TMC led the charge against India's biggest bank fraud, Tamil parties - the AIADMK and the DMK came together to demand implementation of the court order on constitution of Caurvey Water Management Board.

The TDP and a Congress member demanded implementation of the promise to give special status to Andhra Pradesh after Telengana was carved out of it.

AIADMK, DMK, TMC, TDP members and KVP Ramachandra Rao of Congress rushed into the well of the House, raising slogans on various issues.

Chairman M Venkaiah Naidu first adjourned the proceedings for 10 minutes and then till 1400 hours when similar scenes were repeated on reassembly despite his assurance to members that discussions on issues raised by members would be allowed under appropriate rules.

When the House reassembled after the first adjournment, Naidu asked members, "Are you in Parliament or somewhere else" and persuaded members to return to their seats but only for a short period.

Observing that he has received notices from several members under Rule 267 requiring listed agenda to be set aside to take up discussion on the issue being raised, Naidu said the issue of fraud at the Punjab National Bank (PNB) was very important and the House needs to discuss.

"This is agitating the minds of the people," he said.

He, however, said he cannot accept the notice under Rule 267 given on the issue by Leader of the Opposition and senior Congress leader Ghulam Nabi Azad, party's deputy leader Anand Sharma, Pramod Tiwari, D Raja (CPI), Sukhendu Sekhar Roy (TMC) and others.

A discussion on the issue can be allowed under Rule 176.

The Rule 176 of the Rules of Procedure and Conduct of Business in Rajya Sabha allows raising of matters of urgent public importances through a short duration discussion but without a formal motion or voting.

Naidu said he will need to discuss with the government and the Leader of the House the issue of allocation of time before allowing a discussion on the issue.

On the notices given by Tamil parties over the Cauvery water matter, he said he would allow the matter to be raised as a zero hour mention.

To TDP and Rao, he said the issue had been discussed before and if they wanted a further discussions they could give a notice under proper rules or raise it during the debate on the Union Budget for 2018-19.

Naidu also said he has received a notice under Rule 267 from Vinay Sahasrabuddhe (BJP) over alleged corruption by relatives of a former minister. "That is also important but I am not allowing it as 267. Give notice under appropriate rules," he said.

But the members were not satisfied and rushed into the well. TMC members shouted slogans for bringing back Nirav Modi, the alleged mastermind of the fraud at PNB, while Tamil parties raised slogans on the Cauvery issue.

TDP and Rao stood in the well holding posters in support of their demand for a special package for Andhra Pradesh.

"You are in Parliament. Don't create hungama (ruckus). Don't lower the dignity of the House," Naidu said. "This is not the way."

He said no posters should be displayed and warned of action against violators.

"Members seem determined to disrupt," he said before adjourning proceedings till 2 pm.