Rajya Sabha proceedings were adjourned till 3 pm on Monday amid protest by opposition parties over their demand to revoke the suspension of 12 members of the House. 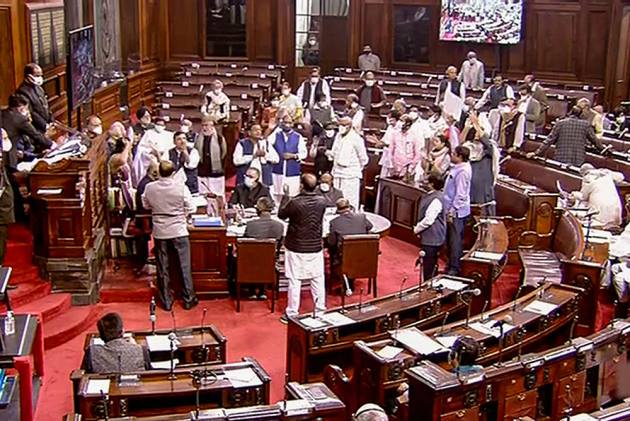 As soon as the House resumed in the afternoon, Deputy Chairman Harivansh called for laying on the table the statement of Finance Minister Nirmala Sitharaman.

Thereafter the Deputy Chairman sought initiation of the short duration discussion on the 'situation arising out of price rise in the country including the rise in the prices of petroleum products'.

Leader of the Opposition Mallikarjun Kharge stated the he was ready for the discussion but requested that the suspended MPs be first called in the House.

"I request you to the please call them inside (the House) for once," he said while noting that they have been out of the House for five days.

To this, the Chair said the Leader of Opposition and Leader of the House should sit together to find a solution to this. Kharge said the suspended MPs also want to discuss the price rise issue. However, the Deputy Chairman called out his name to initiate the discussion.

When Kharge continued with his plea to call the suspended MPs, the Deputy Chairman called the name of Anand Sharma followed that of Fauzia Khan and subsequently Manoj Jha to participate in the debate.

However, no member spoke a word on the issue of price rise. Opposition members started shouting and many members trooped into the well following which the deputy chairman asked them to go back to their seats.

As the protest continues, he adjourned the House for an hour till 3 PM. Twelve Opposition MPs -- six from the Congress, two each from the Trinamool Congress and Shiv Sena, and one each from the CPI and CPI(M) -- were suspended from Rajya Sabha last Monday for the entire Winter Session of Parliament for their "unruly" conduct in the previous session in August.