The 50-year-old self-styled godman, who boasted of millions of followers, is lodged in Rohtak's Sunaria jail for raping his two disciples. 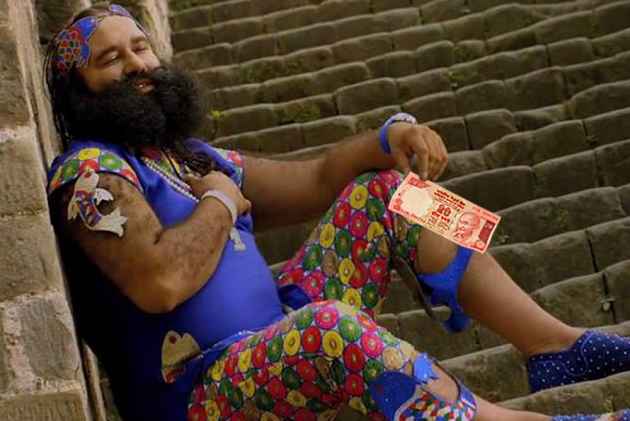 He was master of the sprawling Dera Sacha Sauda headquarters at Sirsa till past August 28. But, now incarcerated, Gurmeet Ram Rahim Singh spends his time in jail growing vegetables, pruning trees-- eight hours a day just for Rs 20.

The 50-year-old self-styled godman, who boasted of millions of followers, is lodged in Rohtak's Sunaria jail for raping his two disciples.

A special CBI court had sentenced him to 20 years in jail, 10 years each in two rape cases, on August 28. And the 'pita-ji', as his followers used to call him reverently, was stamped as prisoner number 1997.

"He has already taken up his work."

Whatever he produces will be used in the jail mess.

Born in the Sri Gurusar Modia village in Rajasthan's Sri Ganganagar district on August 15, 1967, Ram Rahim used to help his landlord father in farms during his early years.

"In jail, he will also prune trees adjoining his barrack. He will get Rs 20 per day for farming work, which falls under the unskilled work category," the DGP (jails) said.

Normally, eight hours is maximum a prisoner is allowed to do, he said.

He described the high-profile inmate as a "disciplined prisoner" as he dismissed reports that Ram Rahim was being extended any special treatment.

"It is (a) baseless and imaginary (report). No prisoner in jail is given any special treatment and that includes Ram Rahim," he said, adding there is no TV set in his cell.

"He is living in jail like any other ordinary inmate and he is living like a disciplined inmate. He is being provided the same food as given to other prisoners."

Asked for his response over reports which quoted some inmates, who have come out of the Sunaria prison, to claim that Ram Rahim is uncomfortable and breaks down in jail, the DGP said, "This is baseless".

"He (Ram Rahim) does not have common contact with other prisoners. Access to his barrack is controlled (for security reasons)," he said.

Media reports about his health and other activities are also without any basis, said the jail officer.

Singh said Ram Rahim has provided two telephone numbers to prison authorities-- one of which is of his adopted daughter Honeypreet, and the other his own number he left behind at the Dera headquarters in Sirsa.

But, he has not made any special request to talk to Honeypreet and media reports suggesting this are "wrong", the officer said.

So far, police verification of these two numbers have not been conducted, he said.

He said any prisoner is allowed to submit phone numbers of two blood-relatives whom they can call. Also, Ram Rahim has given 10 names who could meet him in the prison.

"We have sent these names to the Sirsa Police and so far we have got verification of his mother who has already met him," the officer said.

On August 25, the day the self-styled godman was convicted, there was widespread violence in Haryana and other neighbouring states. At least 36 people had died in the violence and arson, epicentre of which was Panchkula.

The Haryana Police has issued a lookout notice for Honeypreet in connection with the violence.

The DGP (jails) also said that Honeypreet, who had accompanied Ram Rahim in a helicopter after his conviction, was not allowed inside the jail. She was asked to sit outside the rest house of the prison and the police were intimated.

He said that for security considerations, Ram Rahim has been lodged in a barrack with only few prisoners who have a track record of "good conduct".

Besides, jail staff with impeccable record have been put on duty near his barrack.

He said prison authorities have taken inputs from various agencies about threat perception to Ram Rahim.

"On security grounds, only a few inmates have been kept in Ram Rahim's barrack. Only those prisoners whom we thought can be put there from security point of view, only they have access to his barrack," he said.

The police had recently conducted a mock drill and alerted PGIMS Rohtak in preparation for dealing with any medical emergency which would involve Ram Rahim being taken out of the prison.

"They just conducted a mock drill, but a section of media associated that to his health. He (Gurmeet) is healthy and doing fine," he said.