What better occasion than Diwali, that celebrates the return from exile of Lord Rama, to revisit this short extract from an excellent new translation of Urdu poems into English 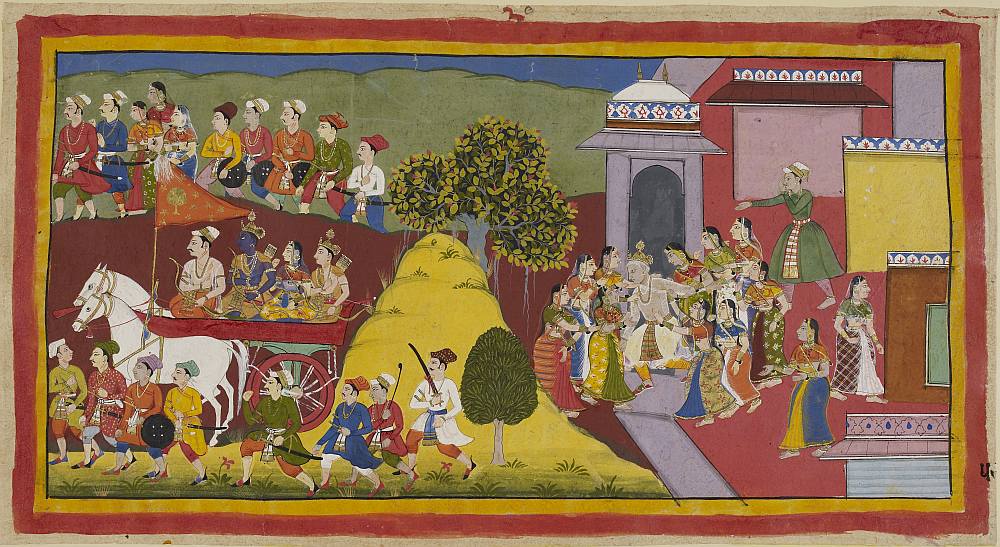 The Taste of Words: An Introduction to Urdu Poetry
Edited and Translated by Mir Ali Raza With an introduction by Gulzar
Penguin Books Rs 390/ 312 pp


Chakbast (1882–1926) was one of the foremost lawyers of Lucknow in the early twentieth century. A veteran of the freedom movement, he wrote eloquently in support of ‘home rule’, as independence was termed in those days. His first book, titled Subh-e Watan (Morning in the Homeland), was published in 1931, five years after his death. He wrote in a variety of formats, including the ghazal. The sher from his collection that became most famous was:

Life,
When elements become ordered, that’s all
Death,
But a moment when into chaos they fall

Chakbast would, however, achieve immortality for his Ramayan poems. He wrote three, each a masterpiece in the musaddas tradition. They were ‘Ramayan ka Ek Scene’ (A Scene from the Ramayana), ‘Maa ka Javaab’ (The Mother’s Response), and ‘Vanvaas par Ayodhya Nagri ki Haalat’ (The State of Ayodhya during the Exile) . I have translated an excerpt from ‘Ramayan ka Ek Scene’ that depicts the moment when Ram, who has been banished from Ayodhya for fourteen years, takes his final leave of his mother Kausalya.

A Scene from the Ramayana

He said goodbye to his father taking the name of God
The first step on fidelity’s tough path his feet had trod
Now for a meeting with his mother he began to plod
Wiping his tears he spoke inward squaring his shoulders broad
‘I dare not let her see my pain; it will cause her more grief
Better I show a smiling face that may give her relief.’

Thus steeling his sad heart, the youth began to move at last
He reached but found her silent; lost in her own thoughts, downcast
Alone in a doorway, though contemplating something vast
He’d braced for tears but was rendered dumbstruck by this contrast
Her body appeared bloodless, her colour yellow and pale
As if she was no human form but a stone statue, frail

Wonder what passed through the mind of that woman innocent
She cast a glance at her scion, her gaze like a lament
Her lips quivered as if she would give voice to her torment
Finally grief moved from her heart and to her eyes it went
The colour of her face began to portray her heart’s plight
Her grief became a tongue itself, and commenced to recite

With weeping eyes she asked her son, ‘Why don’t speak your mind?
I know what errand brings you here, what puts you in a bind
“Everyone will be happy if I leave,” you have divined
But I will never permit you to go, let me remind
You that you are my shining star, I’ll never let you go
Like a yogi to the forest, I must say no, no, no.

‘Has this world lost its loyalty, why has our blood turned white?
Has the desire for wealth and fame caused us to lose our sight?
How will this sorry story end? It will only cause blight
I quiver like a reed when I imagine my son’s plight
My question is to those people who are planning this strife
Do they plan to live forever? Don’t they fear afterlife?

‘Had I been born a beggar’s girl, this would not be my fate
My life wouldn’t have been subject to this deplorable state
The snake of false prestige would not have bit me with such hate
You are my son, were you less to me than a kingdom, great?
I am happy; someone set fire to this throne and crown
If you leave me; watch me if I don’t burn this kingdom down.’

When the brave prince heard all at once his mother’s piteous words
His heart felt as if it had been struck by a sword or worse
The moment was at hand when eyes would feel tears of remorse
But slowly in a level voice he began to converse
For he thought, she may not survive unless he held his peace
‘My emotions will only cause her distress to increase.’

Then slowly he ventured to speak, and said, ‘My mother dear
Please do control yourself, indeed for your well-being, I fear
I understand your sadness at this parting is severe
But do summon some patience, and this thought may bring some cheer
Perhaps this autumn is the way a new spring to instil
Maybe this is an expression of God’s mysterious will.’

These poems have been well analysed by Neil Krishan Aggarwal in ‘The Rama Story of Brij Narain Chakbast,’ Annual of Urdu Studies 22 (2007).