Real Madrid missed the opportunity to go top of LaLiga, but Zinedine Zidane feels that is because of the officiating against Sevilla 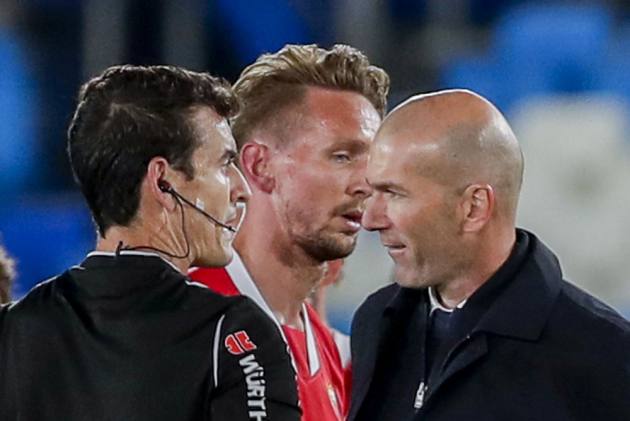 Zinedine Zidane was left fuming by the decision to award Sevilla a penalty for handball against Eder Militao as Real Madrid were held to a 2-2 draw that means the title is no longer in their hands. (More Football News)

A gripping game at Estadio Alfredo Di Stefano on Sunday came to life in the latter stages as a remarkable twist left Madrid trailing 2-1 with just over 10 minutes to go.

Madrid had seemingly earned themselves a glorious opportunity to go 2-1 up as Karim Benzema led a break and was brought down in the Sevilla box by Yassine Bounou.

But a VAR review overturned the decision because a handball offence by Militao was spotted at the other end at the start of the move, and Ivan Rakitic converted the spot-kick that was subsequently awarded to Sevilla.

While a Toni Kroos effort deep into stoppage time deflected off Eden Hazard to earn a share of the spoils and essentially end Sevilla's slim title hopes, it did Madrid little good as city rivals Atletico remain top with a two-point lead heading into the final three games.

Zidane was seemingly unconvinced by the merits of the penalty against Madrid, suggesting that if Militao – who was not facing the ball when it hit his hand – was guilty of an offence then Sevilla's Joan Jordan should have conceded a penalty earlier in a similar situation.

"I don't understand anything. If there is a Militao handball, there's a Sevilla handball as well," he said.

Zidane: "I’m happy with how we played. We deserved more. Our second half was spectacular. It took us a while to get into the match, but the second half was very very good."#HalaMadrid pic.twitter.com/V3XCpV92bG

"I was not convinced by what he [the referee, Juan Martinez Munuera] told me. I never speak about a referee, but today I am angry.

"In the end it is what it is, we are not going to change anything. I'm happy with our game, we deserved more because the second half was spectacular.

"I'm not going to talk about that anymore. We've already talked about it. The referee has to explain the rules to me, but that's it. We're going to fight to the death, until the end."

Pressed on his interpretation of the handball law, Zidane added: "We can talk now… but it will not be clarified now and that is what bothers me.

"We have to think about the three remaining games. I am angry because we deserved the victory."

He was then seemingly encouraged to denounce VAR, though Zidane again pointed to what he felt was handball by Jordan.

"I trust football. What I'm saying is that I saw two hands and they whistled ours."