Real Madrid and Atletico Madrid face each other next weekend, with Zinedine Zidane convinced the title is not beyond his team. 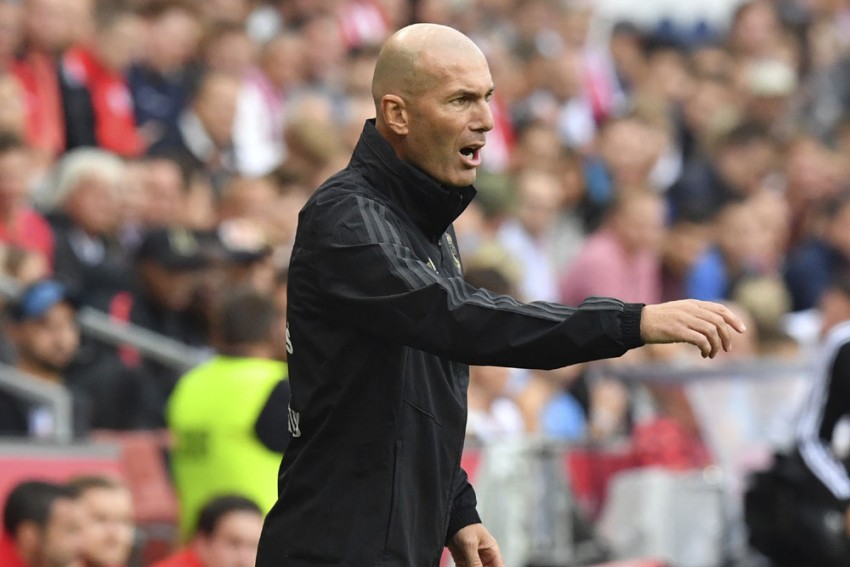 Zinedine Zidane insists Atletico Madrid can be caught at the top of the table, with the Real Madrid coach adamant the title is not out of reach for Los Blancos nor Barcelona. (More Football News)

Atletico lead the way in Spain's top flight and until recently looked to be running away with it, but their position has become a little less commanding after dropping points in three of their previous five league games.

A win at Villarreal on Sunday will put Atletico five points clear of Barca once again while still having a game in hand – Madrid, one point further back, will have also played one match more than their local rivals after Monday's visit of fifth-placed Real Sociedad.

Zidane is also seemingly not ruling out Sevilla despite the fact Julen Lopetegui's side lost 2-0 at home to Barca on Saturday, meaning they could end the weekend 10 points adrift of the summit.

While some are framing Atletico's position at the top as the most pressured, Zidane prefers to see it as Diego Simeone's men having an advantage, as the two Madrid giants prepare to tussle next weekend.

"Now the league [title race] is three, tomorrow it will be two and then four again," Zidane told reporters on Sunday." Everyone has their opinion.

"LaLiga is open to all and whoever is ahead has the advantage, but there are many points left and we are going to continue with our business.

"We do our thing. What's going to happen tonight, I don't know, and we don't even have to watch it – I will watch it as a fan.

"There are 42 points at stake and it is our objective is to add the maximum possible points."

Karim Benzema and Eden Hazard returning from injury would surely improve Madrid's fortunes, with the Frenchman last playing on February 14 and the former Chelsea star a month into his layoff with a thigh issue.

While both are getting closer to a return, Zidane still does not have a return date for either.

"Benzema and Hazard are better, but they are not ready," he said. "I cannot give a date, they will recover later than those who have already returned. I can't give an exact date."

Sergio Ramos is another player Madrid have had to cope without recently, with the captain absent since mid-January with a knee injury – not that it has stopped the centre-back dominating many of Zidane's news conferences since.

Ramos' contract is up at the end of the season and it remains to be seen if he will agree to an extension, which, to Zidane's frustration, is becoming a regular topic.

"You always ask me the same thing – he's an impressive man. I want him to get fit, but apart from that, nothing else. Tomorrow we have a game," Zidane said.