The women in Salim­-Javed's movies are people you feel you want to know. 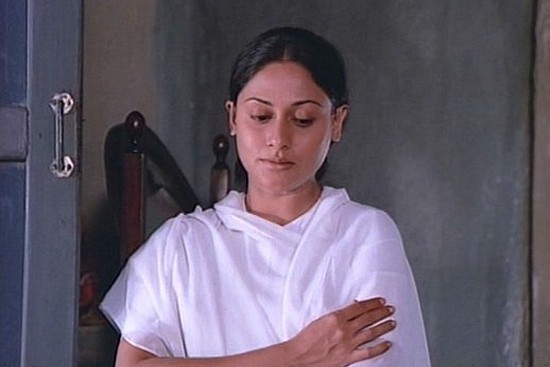 In Sholay, Radha (Jaya Bhaduri) doesn't have a tremendous number of lines, but her presence makes a tremendous impact. She shapes the narrative in an essential way; without her, there would be no story for the movie to tell. Early in the film, when Thakur has given Jai and Veeru a night to think about the vigilante mission he has requested of them, the two men prepare to loot the cash in Thakur's house and make a run for it. Radha catches them in the act, and fixes on them her intense, reproachful gaze. In just a few words the men are shamed, and that quiet moment of reproof from Radha sets them on the righteous path toward saving Ramgarh from the tyranny of Gabbar Singh.

Basanti (Hema Malini) is as different from Radha as two people can be. Where Radha is all contemplative gravity, Basanti is effervescent and expansive. Radha glides slowly and somberly along the arcades of the Thakur's home; Basanti bounces and skips from one end of Ramgarh to the other, and beyond. Radha chooses words with economy, while Basanti is famously garrulous. Radha carries the burden of a past weighted with suffering (a past in which she was a bit more like Basanti); Basanti is tabula rasa, all promise and potential.

Yet Basanti, too, has depths to discover. Like many a filmi young woman, she is bullied into love, but once there she loves with as much fierce energy as she does everything else. The chipper, chattery ingenue is such a staple of Hindi film as to be past cliché, but Basanti offers more than the tired old trope.

Radha's grave serenity creates some of Sholay's most introspectively intense scenes, as her eyes lock with Jai's from a distance and in her sadness he sees the possibility of his own redemption. But Basanti's tenacious love generates one of the film's most outward­facing displays of endurance in sacrifice, the lacerating, boiling dance of "Haan, jab tak hai jaan.”"

And just as Basanti is remembered for her unbroken chatter more than anything else, the words she sings in that song confirm that no matter what she endures, she will always have the power of her voice:

Here at the 40th anniversary of Sholay, I thought about these two women, how both their natures and their actions drive key moments in the narrative. Sholay is a showpiece for its male stars – most Salim­Javed movies, and indeed most movies of their era or any era, are showpieces for their male stars. But Salim­Javed were rarely content to use female characters as window­trapping or as vapid shiny surfaces from which to reflect male charisma in the form of formulaic romance.

Radha and Basanti have depth and dimension and agency. They are fully realised human beings in the world of Sholay. And they aren't alone. One of the pleasures of Salim­Javed movies is how often they crafted vivid female characters like this for their stories.

One of Salim­Javed's scripts was not so much a showpiece for its male stars as it was for Hema Malini: Seeta aur Geeta. Her two titular characters in that film span as broad a space as Radha and Basanti in Sholay; the submissive, cautious Seeta retracts into the smallest space she can manage to occupy, while Geeta, big and impulsive, could not contemplate any other expression than bold self­assertion. Geeta's forthright strength of personality is a wave of change that transforms – or at least exhausts – nearly everyone in the movie.

Early on, Ravi (Sanjeev Kumar) character muses about the type "seedhi­saadhi Hindustani ladki" he wishes to marry. But then Ravi meets Geeta, and bowled over by the magnificent energy with which she engages the world, he learns what kind of woman he really wants. Geeta transforms Seeta's oppressive aunt (Manorama), too, from a raging tyrant to a cringing submissive.

When the chips are down, even the meek Seeta is inspired by the force of her fearless twin's personality to become an active participant in her own fate. And then the movie closes with some quick scenes of very bold husband­swapping shenanigans perpetrated by both sisters; who knows whether the two men land up in the correct rooms? Without Geeta's transformative influence, Seeta could never have been in on such a scandalous practical joke.

Other Salim­Javed scripts feature women of agency, too. The narrative of Don is driven in large part by Roma's quest for revenge. In Deewaar, Parveen Babi's character helped reshape the landscape of the Hindi film heroine, smoking cigarettes, drinking liquor, and even appearing in a bed scene beside her lover. In Shaan, Renu (Bindiya Goswami) beats two high­watt stars at their own game, conning the con­men Vijay and Ravi (Amitabh Bachchan and Shashi Kapoor, of course) into dropping Rs.30,000 on a stolen car. Later, when they plan a jewel heist, Sunita (Parveen Babi) steals the necklace right out from under their noses, before planting it on Vijay.

Finally, the two women join forces with the stars to create a team of expert fraudsters. Women in Salim­Javed movies are sometimes respected professionals. In Kaala Patthar, Parveen Babi plays an investigative reporter looking to expose the conditions endured by mine workers, and Rakhee's character is an idealistic physician who hopes to heal both their bodies and their souls. In Trishul, Hema Malini is the general manager of a real­estate company – indeed, Shashi Kapoor stammering with both surprise and attraction when his character realises this is one of the film's funniest scenes. Even Sridevi plays a reporter in a Salim­Javed script, Mr India.

But the most haunting of Salim­Javed's women are the ones whose gravitas grounds the stories that swirl around them. In Kaala Patthar, Rakhee's idealist doctor forms a cerebral connection with the tortured, philosophical Vijay; their relationship moors the film with its pensive steadiness in contrast to the masala energy of the film's other relationships. In Deewaar, Nirupa Roy, as Vijay and Ravi's mother, is a deeply principled and fiercely dignified person. Her dignity, the source of her unshakeable integrity, drives the most dramatic moments of the film. And then there is
Sholay's Radha, perhaps the gravest of all, in whose silences are wrapped a mini­polemic about the treatment of widows and their right to pursue happiness in their own lives.

Though Salim­Javed's movies, just as those of the industry at large (then and now), tend to focus more on the men on whose stories they center, the women they create are often fully realised human beings. They are people you feel you want to know.