Unable to cope with a slow turning pitch, South Africa fails in its quest to equal Australia's world record unbeaten run of 21 one-dayers. Virender Sehwag came out of a prolonged form slump with a sparkling unbeaten 77 as India shattered South Africa's quest for a world record winning streak with a comfortable six-wicket victory in the second one-dayer today.

After restricting the visitors for a modest 169 for nine on a turning track, Sehwag gave glimpses of his vintage form with a belligerent 62-ball knock to help India overhaul the target with 14.2 overs to spare and square the five-match one-day series 1-1.

Sehwag came in to bat at the number 4 slot and quickly swung the game decisively in India's favour with his lusty hitting while Gautam Gambhir (38) and Irfan Pathan (37) were the other notable contributors in the low-scoring floodlit encounter at the M Chinnaswamy stadium.

The South Africans, looking to equal Australia's world record unbeaten run of 21 one-dayers, were done in by the slow turning track which was brilliantly exploited by the Indian spinners after Pathan (3/23) produced a devastating opening spell.

None of the South African batsmen could hang in for long after being put into bat as wickets kept tumbling at regular intervals much to the delight of a vociferous capacity crowd. Andrew Hall (32), Ashley Prince (30) and Shaun Pollock (29) managed to get the starts but could not really make it count.

The two teams will now travel to Chennai for the third one-dayer to be held under floodlights on Tuesday.

Sehwag had last scored a half century in the tri-series final against New Zealand in Zimbabwe two months ago.

His consistency had been a debating point for a while but there had could be no two opinion about the fact that when he gets going, the Delhi batsman is unstoppable.

Sehwag opened with a punishing cover drive off spinner Johan Botha. The savageness of his shot was such that captain Graeme Smith immediately took the bowler off the attack.

Smith had seen the omen but he could do little to change the course of the match.

What set Sehwag's innings today from his previous ones was his determination to make his good start count.

After adding 53-runs with Pathan, he stitched another 50 runs with his skipper Rahul Dravid (10). And although there were 11 fours and he took only 62 runs for his 77, the acceleration came only when the target was in sight.

Sehwag slammed two fours off part-time bowler Justin Ontong to hasten the finish and Yuvraj Singh, centurion at Hyderabad, drove the slow bowler to cover fence for the winning hit. 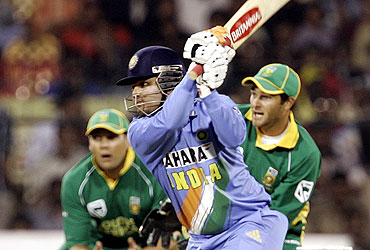 The compelling knock of Sehwag came after a fighting innings by Gambhir.

Shaun Pollock and Makhaya Ntini bowled as many as three maiden overs on the trot as they stoutly defended their meagre target.

Sachin Tendulkar (2) tried to break the shackles but mistimed an on-drive for a catch to substitute Robin Peterson at mid-on off Pollock.

Pollock and Ntini in turn relied on the hardness of the new ball to get the maximum out of the slow track.

They were soon met with some fiery strokemaking by Gambhir. The left-hander boldly cut and sliced over point.

Then came the two fours off Andre Nel's first over. The first was a top edged pull shot, followed by a drive through point.

Next moment, the batsman and the bowler were exchanging words, and it was the Indian doing much of the talking. Apparently, Nel's facial gestures had annoyed Gambhir and the umpires had to intervene and ask him to go easy.

Pathan could not be subdued too long, and a well timed on drive off Nel signalled his opening the shoulders.

In between, there were some nervous moments when the duo went for risky singles. Twice Pathan was fortunate to see the fielder miss the stumps, but eventually his luck ran out.

Gambhir was out in similar fashion, it did not help that his partner was Sehwag.

On both the occasions, Ontong was the fielder who came up with the quick pick-and-throw.

Earlier, South Africa could never get going after they were put in to bat on a turning track.

It was, however, Pathan (3-23) who dealt the early blows to remove the top three batsmen in an incisive spell.

Johan Botha (15 not out) lifted the total somewhat by hitting two boundaries in the final over by Ajit Agarkar which cost 11 runs.

Abraham de Villiers (4) departed early, dismissed in the first over by Pathan.

The Baroda left-arm paceman ensured he made ample amends for his dismal performance at Hyderabad when he took the vital wicket of Smith off the first ball of the fifth over, the skipper being trapped plumb leg before for 3.

The South Africans lost another crucial batsman in Jacques Kallis who edged a Pathan delivery to be caught by Mahendra Singh Dhoni for 2.

Hall then combined with Prince to bring some order but perished to Harbhajan, Mohd Kaif taking the catch at forward short leg.

The experienced Mark Boucher (14) also failed to get a partnership going and was removed off the very first ball by Sehwag who also got rid of Prince in his very next over.

Reeling at 96 for 6, it was the flamboyant Justine Kemp (28) and Shaun Pollock (29) who combined to stem the rot briefly. Kemp hit three fours in 59-ball knock while Pollock struck a boundary and a six in his 61-ball stay at the wicket.