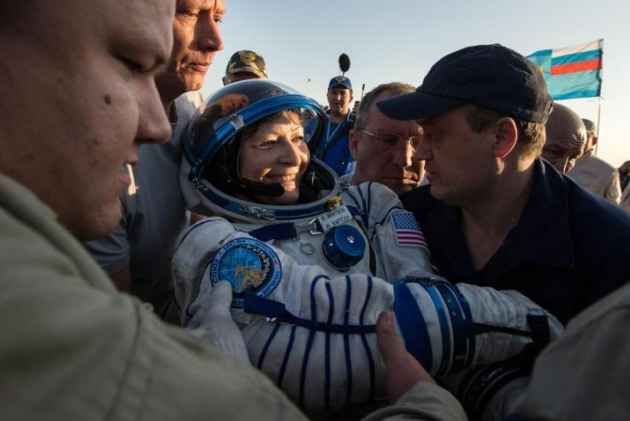 NASA astronaut Peggy Whitson, the first female International Space Station commander, who broke multiple space records, has safely landed on Earth along with her crewmates after completion of a 288-day mission.

Her mission had begun last November and spanned 122.2 million miles and 4,623 orbits of the Earth – her third long-duration mission on the station.

During her latest mission, Whitson performed four spacewalks, bringing her career total to 10. With a total of 665 days in space, Whitson holds the US record and places eighth on the all-time space endurance list.

Her crewmate Jack Fischer of NASA, who launched in April, completed 136 days in space, during which he conducted the first and second spacewalks of his career.

The mission landed safely in the remote town of Dzhezkazgan in Kazakhstan.

While living and working aboard the world's only orbiting laboratory, Whitson and Fischer contributed to hundreds of experiments, welcomed several cargo spacecraft delivering tonnes of supplies and research experiments, and conducted a combined six spacewalks to perform maintenance and upgrades to the station.

"I will miss seeing the enchantingly peaceful limb of our Earth from this vantage point. Until the end of my days, my eyes will search the horizon to see that curve," said Whitson.

At the age of 57, Whiston is also the oldest female astronaut in the history of space exploration.

"I am not sure what the future holds for me personally, but I envision myself continuing to work on spaceflight programs," she said.

"My desire to contribute to the spaceflight team as we move forward in our exploration of space has only increased over the years," she added.

Among their scientific exploits, Whitson and Fischer supported research into the physical changes to astronaut's eyes caused by prolonged exposure to a microgravity environment.

They also conducted a new lung tissue study that explored how stem cells work in the unique microgravity environment of the space station, which may pave the way for future stem cell research in space.

Additional research included an antibody investigation that could increase the effectiveness of chemotherapy drugs for cancer treatment, and the study of plant physiology and growth in space using an advanced plant habitat.

Expedition 53 continues operating the station, with Randy Bresnik of NASA in command, and Sergey Ryazanskiy of Roscosmos and Paolo Nespoli of ESA (European Space Agency) serving as flight engineers.

The three-person crew will operate the station until the arrival of NASA astronauts Mark Vande Hei and Joe Acaba, and Alexander Misurkin of Roscosmos.

Vande Hei, Acaba and Misurkin are scheduled to launch September 12 from Kazakhstan.