Renjith Sreenivas murder: Khushbu wants justice to be delivered at the earliest

Stating that the Left government in the state could not claim that they were not aware about the possibility of such a murder, she alleged police were lethargic in their action. 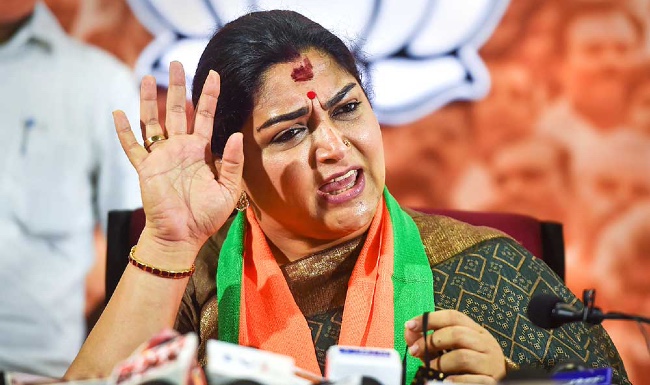 BJP leader and actress Khushbu Sundar on Wednesday condemned the recent killing of party functionary Renjith Sreenivas and urged Chief Minister Pinarayi Vijayan to ensure that it was the last such "politically motivated" murder in the state.

They could have easily closed the exit points and arrested the murderers but that did not happen, she told reporters here.

It is an "eye-wash" when the state government says that two people have been arrested, she said, adding that they were not sure whether the actual murderers or perpetrators of the murder are still in the state or fled the state.

"So, I would like to urge Chief Minister Pinarayi Vijayan sir to please look into it and make sure that murder of Renjith Sreenivas is the last one in the state... that is politically-motivated," Sundar said.

Nobody gains anything from this kind of murders, she added. Describing Sreenivas as a God-fearing person, simple-hearted party worker, beloved father and a beautiful husband and son, the BJP leader wanted justice to be delivered at the earliest.

Sundar, who is a special invitee in the National Executive Committee of BJP, earlier tweeted: "Our brother #AdvctRenjithSrinivas was a man who commanded immense respect in his field. No enemies, no enemity, none. He had a clean record, was God fearing and devoted to his family and a true @BJP4Keralam @BJP4India warrior. We have lost him and that vaccum will remain."

Two back-to-back murders of two political activists- one BJP's Sreenivas and second SDPI's K S Shan- in coastal Alappuzha district had rocked Kerala last week. Shan, the state secretary of SDPI, was killed by a gang on Saturday night while he was on his way home in Alappuzha, while the BJP OBC Morcha state secretary Sreenivas was hacked to death in front of his family by some assailants in his house on Sunday morning in the same district.