The visiting ASEAN leaders were the chief guests at the Republic Day parade. 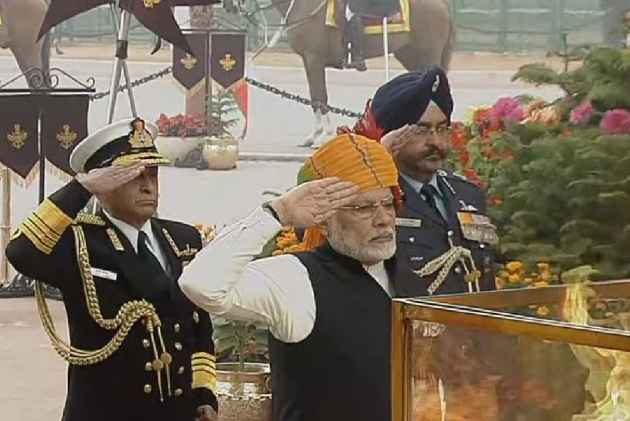 Marching contingents, strategic defence weaponry and colourful tableaux were on display as India celebrated its 69th Republic Day with a grand parade watched by thousands of people along with ten ASEAN leaders who attended the event as chief guests, in a historic first.

Signifying India's fast growing strategic ties with ASEAN, leaders of all the 10 countries of the powerful bloc attended the parade at the majestic Rajpath which showcased the country's military might and cultural diversity.

Cold weather conditions and dense fog failed to dampen the enthusiasm of thousands of spectators who witnessed the nearly one-and-half-hour-long parade that marched down the eight-kilometre stretch from the Rajpath to the Red Fort amid an unprecedented security cover.

They were seen sharing light moments with each other and capturing memories in their cameras.

They were seen applauding the tableaux of their respective states.

Congress President Rahul Gandhi also attended the parade. He was seen sitting in the middle rows and chatting with senior Congress leaders and Leader of the Opposition in the Rajya Sabha Ghulam Nabi Azad.

Twenty three tableaux, including those representing various states, ministries, the All India Radio (AIR) among others, rolled down the Rajpath.

Tableaux from 14 states and union territories showcased the historical, art and cultural heritage of the country.

The highlight of the parade was the motorcycle contingent, 'Seema Bhawani', comprising women personnel of the BSF that showcased their skills for the first time at the parade.

The paramilitary and other auxiliary civil forces, including the Border Security Force also marched on the Rajpath.

There were a number of interesting Tableaux that rolled down Rajpath.

The Navy also showcased its Indigenous Aircraft Carrier (IAC) Vikrant, which will be commissioned in 2020, while the Defence Development and Research Organisation exhibited the 'Nirbhay' missile and the Ashwini radar system.

The tableau of All India Radio featured Modi's monthly address 'Mann Ki Baat', was one of the many firsts this year.

An Income Tax Department tableau, about special anti- black money drive launched post-demonetisation, that rolled down Rajpath was also on the list of many firsts.

On behalf of the central government, 61 tribal guests from various parts of the country had been invited to witness the Republic Day celebrations.

Fifteen of the 18 children who won the National Bravery Award also participated in the parade. Three children, including two girls, have received the award posthumously.

In the children's section, over 800 boys and girls drawn from three schools in Delhi along with a group of school children from Nagpur and Dimapur, performed colourful dances on different themes.

The grand finale of the parade was a spectacular flypast by MI-17 and RUDRA armed helicopters along with a number of IAF aircraft.

Trailing them were the 'Netra' which is an Airborne Early Warning and Control System Aircraft also known as 'Eye in the Sky'.

'Netra' was followed by the 'Globe formation' comprising one C-17 Globemaster flanked by two Su-30 MKIs among others.

Minutes before the parade began, the prime minister, Defence Minister Nirmala Sitharaman and chiefs of the Army, Navy and Air force paid tributes at the 'Amar Jawan Jyoti', the war memorial at India Gate where an eternal flame burns in memory of those who laid down their lives defending the frontiers of the nation.

As per tradition, after unfurling the national flag, the national anthem was played followed by a 21 gun salute.

A massive ground-to-air security apparatus was put in place in the national capital, turning the city into a virtually impregnable fortress.

The ceremony ended with the playing of the national anthem and the release of thousands of balloons.

Modi and president Kovind also waved to the crowd after the conclusion of the ceremony and were greeted with loud cheers.