As Congress Revels At Party Headquarters, Rahul Gandhi Writ Large All Over

Rahul Gandhi took over the reins of the party from her mother exactly a year ago and the flattering performance of his party in three states seemed to be a befitting gift to him on the occasion. 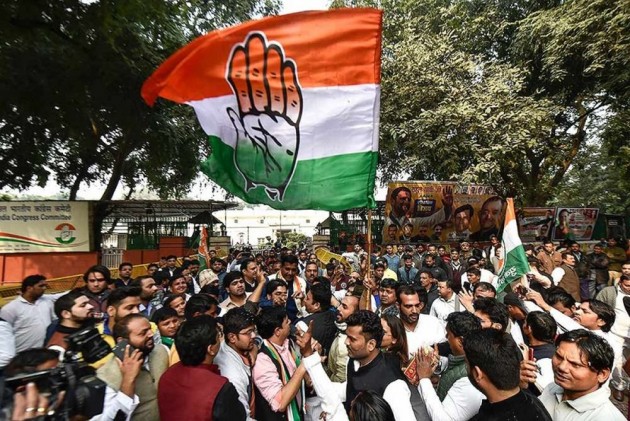 As the day progressed, the spirits at the Congress office rose. From the quiet and mostly deserted AICC office in the morning, the place was steeped in celebrations by noon – the premises were full with party men who were bursting crackers, dancing, raising slogans, and distributing sweets. By that time, Congress was set to win in Chhattisgarh and Rajasthan, and was locked in a close contest in Madhya Pradesh.

One thing seemed clear – the day belonged to Rahul Gandhi. The Gandhi scion took over the reins of the party from her mother exactly a year ago and the flattering performance of his party in three states seemed to be a befitting gift to him on the occasion. Party workers carried cut-outs of him and their slogans hailed the party president. Hoardings crediting the ‘historic victory’ to the efficient leadership of Rahul Gandhi came up outside the AICC office. Most people did not shy away from expressing their intent to see him as the country’s next prime minister.

Siddhartha Tanwar, a Congress worker, said that the efforts the workers had put in going door to door and exposing the BJP’s jumlas had paid off. “They wanted a Congress-mukt Bharat. Under their rule only, we have started rebuilding the Congress-yukt Bharat. The country’s people were feeling cheated,” said Tanwar.

Democracy Has Won. Thank You India, You Have Chosen Love Over Hate: Cong On State Polls Results

Anuruddha Lal, general secretary of Delhi Pradesh Congress Committee, said that the failure in administration in states disenchanted the voters with the BJP. “It is the people’s discontent arising from demonetisation, lack of jobs, etc. that has been reflected in the election results,” said Lal.

Another Congress member said that the electorate have chosen a secular party and have rejected the politics of violence and hate. “The BJP must realise gappebaazi (frivolous talk) won’t work. The entire country is with Rahul Gandhi and nobody can stop him from becoming the prime minister,” said Abdul Wahid Qureshi, a resident of Delhi Gate who was celebrating at the party office.