Namaste England is a forced concept, where a married couple separate due to their own whims and fancy only to reunite later after realisation dawns on them. 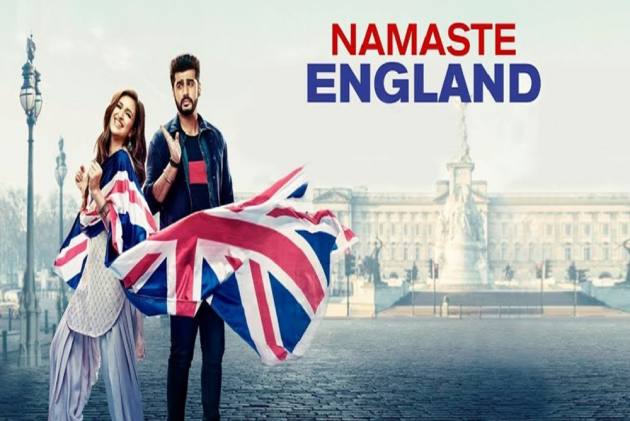 Jasmeet (Parineeti Chopra) comes from a very regressive family, where women are not supposed to work, but are only meant for giving birth and taking care of children.

So when Paramveer (Arjun Kapoor) falls hook line and sinker for Jasmeet, she makes him promise to let her follow her dreams and work as a jewellery designer. He agrees with a caveat, "If the decision is solely mine, then yes."

And their love story begins with Paramveer asking, "Jasmeetji, hamare ishq ka inauguration karen ji?" This is a definite lazy way of unravelling a love story.

But sadly for the couple, their romance is eclipsed when Jasmeet's grandfather makes Paramveer's father promise that they will not make his granddaughter work.

Burdened with this promise, Jasmeet, hits upon the idea of migrating to England, where she can then pursue her work.

The plot meanders on a frothy pace and right from visa to illegal immigration, issues are tackled in a rather half-hearted manner. The dialogues are equally average, run-of-the-mill.

The characters are frivolous, cardboard thin and rationality to their behaviour zilch. While Arjun and Parineeti are competent actors, their performances are juvenile. You squirm in your seat with every passing moment you see them on screen.

Aditya Seal as Sam, Jasmeet's husband of convenience in England is short-changed as a stereotypical supporting cast. So is Alankrita Sahay as Alisha, Param's love-interest in England.

Satish Kaushik as the visa taut, Gurnaam, does not enhance his character and thus is an eyesore. Vinod Nagpal as Sam's grandfather is wasted in a two scene role.

Mounted with ace production values, the film seems glossy and vibrant, but this is strictly visual only. The songs are seamlessly integrated into the plot and are well-choreographed but they do not add value to the story progression.

Those expecting to see the beauty of England would be disappointed. Overall, the narrative is slow with sensibilities of the late 1990s.