Talking to reporters, Rijiju said he had spoken to Punjab Chief Minister Charanjit Singh Channi and it was decided that the central and state agencies will jointly probe the matter in depth and strong action will be taken against those behind the dastardly act. 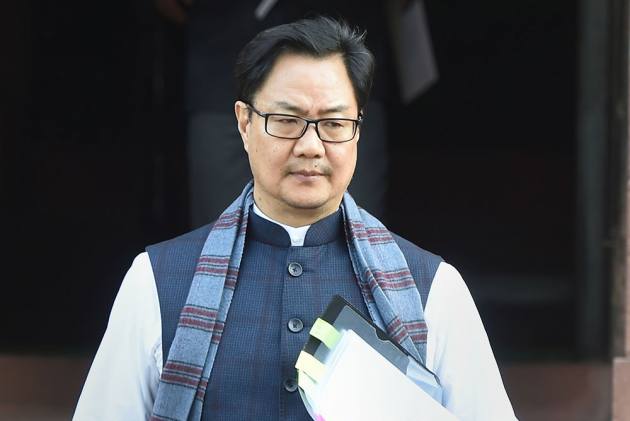 Union Law and Justice Minister Kiren Rijiju on Friday visited the Ludhiana district court rocked by a bomb blast a day earlier and said the Centre and the state will work together to ensure strong action against the domestic and foreign elements trying to spoil peace and harmony in the state as well as the country.

Rijiju said central and state agencies are already conducting an in-depth probe into the incident. A bomb went off in the district court complex in Ludhiana on Thursday, killing one person and injuring six others, prompting the Punjab government to declare a high alert in the state. Police suspect that the man killed in the blast on the second-floor toilet was trying to assemble or plant the explosive device.

Talking to reporters, Rijiju said he had spoken to Punjab Chief Minister Charanjit Singh Channi and it was decided that the central and state agencies will jointly probe the matter in depth and strong action will be taken against those behind the dastardly act. He said the main purpose of his visit was to assure the people of Ludhiana as well as Punjab that by launching a coordinated effort with the state government, this incident will be thoroughly probed.

He said he also conveyed the empathy and support of Prime Minister Narendra Modi to the victims of the explosion and the people of Punjab. "The Centre and the state will work together and take strong action against those elements within the country and outside trying to spoil the peace and harmony of Punjab and the country," he said. This is a serious incident, a sensitive issue, and the central and state governments will work with full coordination, he assured.

The Centre and the state should have one voice on such sensitive issues, Rijiju said. In reply to a question that some political leaders in Punjab were speaking in different voices on this incident, Rijiju said, "It is unfortunate, we are responsible persons. We should speak responsibly." Politics should be the last resort, he added. He said the safety and security of the judiciary and judicial complexes is on top priority of the central government.

On this issue, the minister said, many review committees are already in place and he would also speak with the Chief Justice of India. Rijiju was accompanied by Union Minister of State Som Prakash and National Commission for Scheduled Castes chairperson Vijay Sampla. They also visited the hospital and met those injured in the blast. Rijiju also held an interaction with the District and Sessions Judge and lawyers.

Addressing a press conference in Chandigarh earlier in the day, Chief Minister Charanjit Singh Channi said his government has sought the Centre's support to crack the blast case. Channi said he had spoken to Home Minister Amit Shah hours after the explosion and that the Centre has sent teams to Punjab to investigate the case. On Thursday, the chief minister had expressed his apprehension saying the explosion might have been an attempt to create "anarchy" in the state where assembly polls are due early next year.