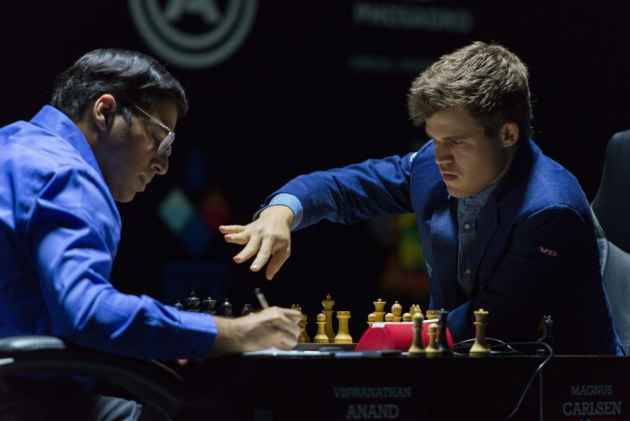 Players are paired off Swiss style . In every round, each player faces somebody with the same score, or near-about. There is an element of luck in the pairings.

For example, the recent Dr Hedgewar Open in Delhi had a prize fund of Rs 10 lakh, and 250 players signed up to play nine rounds over five days. Each player paid between Rs 3,500 and Rs 4,500 as entry fees. Outstation players were offered basic dorm facilities.

Complicated calculations are used as tiebreakers in Swisses. Here is a list of tie breakers. Sometimes prize money is shared. Sometimes not. So there is a large element of luck involved in tie breaks.

(Read about the prize fund and other details)

Going into the last round, seven players (four playing on 6.5 points, and three on 7 points) had a shot at clear or shared first with three of them having a good shot. Obviously there is a premium for good nerves in such situations. There is also the question of optimum strategy.

The tie break scores are dynamic. But all the players in the running would have a sense of their tie break "strength." They would also know their opponents, and the match-ups of their main rivals.

Each would have to make a key decision: Play conservative or aggressive? A professional has invested Rs 3,500 in entry fees and five days in sweat.

Each player must weigh potential risks, rewards, assess his chances of winning against his specific opponent and also assess likely results of other key games including games that affect tie break scores. He must be prepared to switch strategies while in play if an opportunity suddenly opens up. And of course, above all, he has to maintain focus and play well, whatever strategy he decides upon.

Poker players make similar decisions. They need to know how much is in the pot; how much they must commit to compete; roughly how good the chances are of winning; the quality of other players. As the song goes, "Know when to hold and know when to fold". Similar decisions also arise in bridge.

These decisions are relatively cut-and-dried in games where there are clear rules, access to information, strict time limits and mathematically fixed rewards.

Consider the decision for a player with 7 points as above going into the last round. His opponent is about as good as him (since he has the same score) so, there is roughly 50:50 chance of winning or losing with aggressive play.

"Probably", because this is a simplistic analysis. There will be some draws anyhow even if he's very aggressive. A conservative safe strategy doesn't exclude chances of winning. But a conservative attitude also carries the psychological dangers of creating a defensive defeatist mindset. In the event, only one of these seven players, Grover, won in the last round.

Similar decisions often arise in business but real life is more messy. The risks and rewards are fuzzy. The timelines are unclear. The "tie breaks" may involve incalculable outcomes like connecting to the right bureaucrat, or politician, at the right moment. There may be external variables like the rupee-dollar rate to consider.

Will it help if the decision-maker has played a lot of poker, chess, or bridge? Perhaps. At least, he or she has some practice at taking such decisions. More subtly, game players actively enjoy these situations and train for them. This means that, right or wrong, their blood pressure is more likely to stay within acceptable limits.