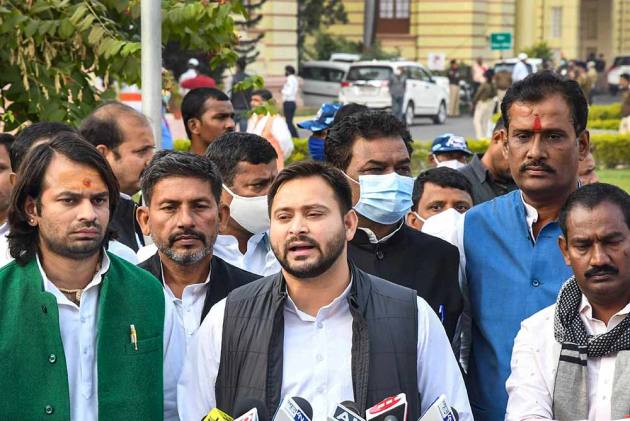 "You (BJP MLAs) are questioning the decision of liquor ban and asking Chief Minister Nitish Kumar for a review meeting on this subject and on the other hand you are also participating in the government. Why are you not withdrawing support from the Nitish Kumar government? The MLAs of the ruling party cannot do both -- criticizing the government and also enjoying being in power at the same time," Mehta said.

"The liquor ban has completely failed in Bihar. The state government does not have the power to address the issue. Nitish Kumar's claim of a successful liquor ban is completely false," the RJD national General Secretary added.

The statement of the RJD leader came after two BJP MLAs -- Hari Bhushan Singh Bachaul and Kundan Singh questioned the liquor ban in the state. Bachaul, a BJP MLA from Bipsi in Madhubani district, demanded rollback on liquor ban. He said the state exchequer is incurring revenue losses due to the ban.

Noida Airport: 'Bhoomi Pujan' By PM Modi At Jewar Today; All You Need To Know

Kundan Singh, BJP MLA from Begusarai, said crime rate is increasing due to the liquor ban in the state.

"While the state police is keeping an eye on liquor operations in Bihar, crimes like murder, kidnapping, rape, theft and other cases are increasing now. The Bihar police is not paying attention to the rising crime graph," Singh added.

"In a bid to implement the liquor prohibition law, the state police entering into the rooms of brides is extremely unfortunate. No one can justify it," he said.

"School children are smuggling liquor in their bags. They are offering home delivery and the state government is playing with the future of the next generation," the BJP MLA added.

"Moreover, the liquor mafias are contesting in the panchayat elections. They are openly distributing liquor among voters. They are using illegal means to win elections and become more powerful. Which kind of society are we making?" he said.