'Robert Vadra Has Gone On A Property Buying Binge'

Lokpal activists ask how Robert Vadra's companies, with a total share capital of Rs 50 lakhs acquired properties worth well over Rs 300 crores at cost during 2007-10 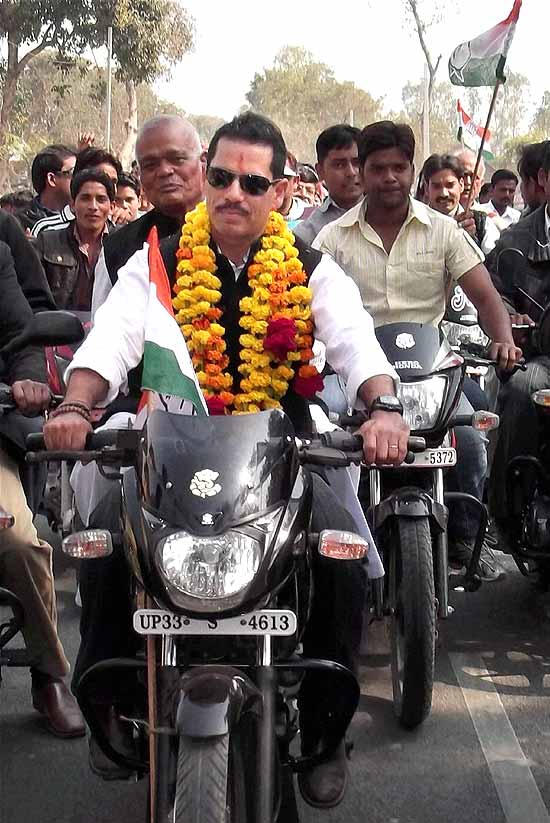 In the last 4 years, Robert Vadra has gone on a property buying binge and has purchased at least 31 properties mostly in and around New Delhi, which even at the time of their purchase were worth several hundred crores.

An analysis of the balance sheets and audit reports of 5 companies set up by him (and owned exclusively by him and his mother) on or after 1/11/2007 show that the total share capital of these companies was just Rs 50 lakhs and these companies together had no income from any legitimate business activity (except by way of interest derived from interest free loans obtained from DLF). Yet during 2007-2010 they have acquired properties which were worth well over Rs 300 crores even at their time of acquisition and are worth more than Rs 500 crore as of today.

The ostensible seed money for this acquisition is shown to have come from unsecured interest free loans from DLF Ltd (over 65 crore). The bulk of the properties are also purchased from DLF at a price which is shown far below the market price. Thus 7 flats in Magnolia apartments in DLF Gurgaon are purchased for a total of Rs 5.2 crores by Vadra’s companies when the market price of each flat at the time of acquisition was well over 5 crore and today its price is between 10 to 15 crore rupees per flat. Similarly a 10,000 sq feet apartment in DLF Aralias (Gurgaon) is shown to be purchased for Rs 89 lakhs when its market price at the time of purchase in 2010 was 20 crore rupees and today is more than 30 crore rupees. Not just that, a stake of 50% share in DLF owned hotel in Saket (DLF Hilton Garden Inn) is shown to be purchased for Rs 32 crore when the market value was well over Rs 150 crore. The detail of these properties, their acquisitions are in the accompanying note which refers to the balance sheets and audit reports of these companies which have been obtained from ROC. This massive property buying spree by the son-in-law of the ruling dynasty in the country gives rise to several important questions:

All these questions need to be answered by a thorough independent investigation. Question is will such an investigation be done and who will do it? Will it be done by agencies controlled by the Government and hence by the ruling dynasty?

That is why one needs an independent Lokpal. Question is will it be conceded by those who risk going to jail as a result?

Credit Card EMIs Get Costlier; Middle-Class Shoppers Likely To Be Affected Most

How To Get The Best From Your Employers’ Health Insurance Cover?

How Digital Insurance Policy Documents Can Make Your Life Easy