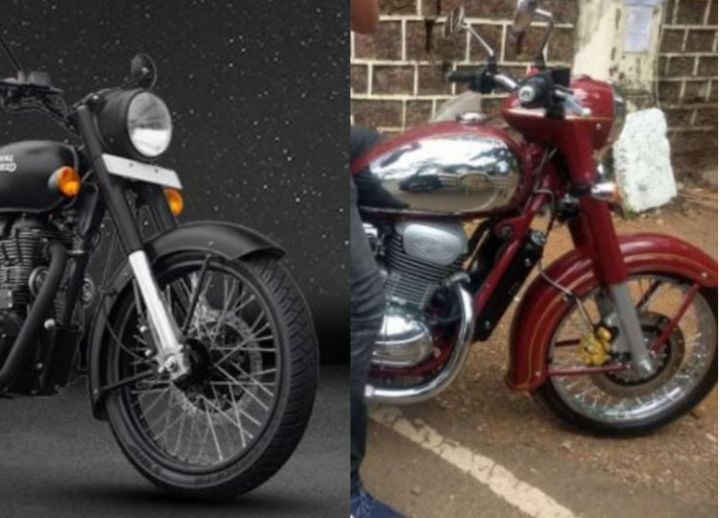 Royal Enfield has been riding the retro wave for quite some time now. But soon, it’ll face tough competition from one of the iconic names from the past - Jawa. The upcoming Jawa 300cc motorcycle has been teased quite a few times now. It blends classic lines with a modern motor and mechanicals. If you’re planning to pick one of these retro motorcycles first, here’s a detailed spec comparison to see which one comes on top, on paper at least. 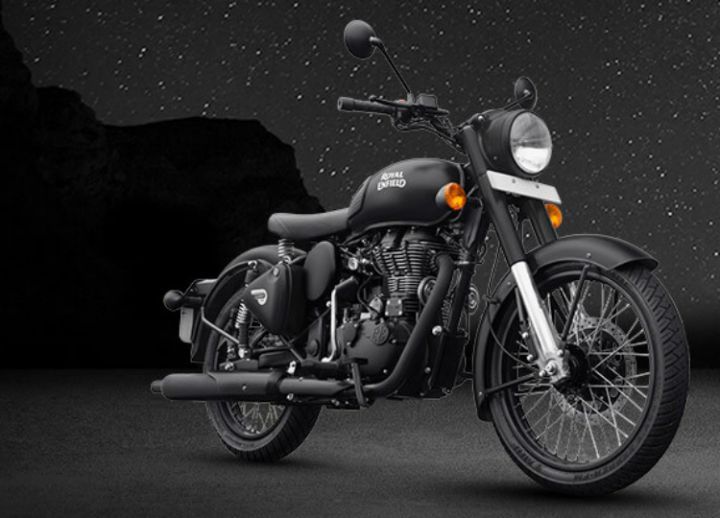 Design and Features
The Royal Enfield Classic 350 is a modern interpretation of the manufacturer’s popular motorcycles from the 70s. It has a classic round headlamp housed within a chrome bezel, with a single instrument cluster on top. The minimalist bodywork, which comprises of the airbox, battery cover and mudguards, is complemented by the teardrop fuel tank. It gets a two-piece seat, with the unit at the front getting springs underneath for added comfort. The rear seat, on the other hand, is removable to give it a more old-school look. The bike gets a lot of chrome accents which enhance its appeal even further. 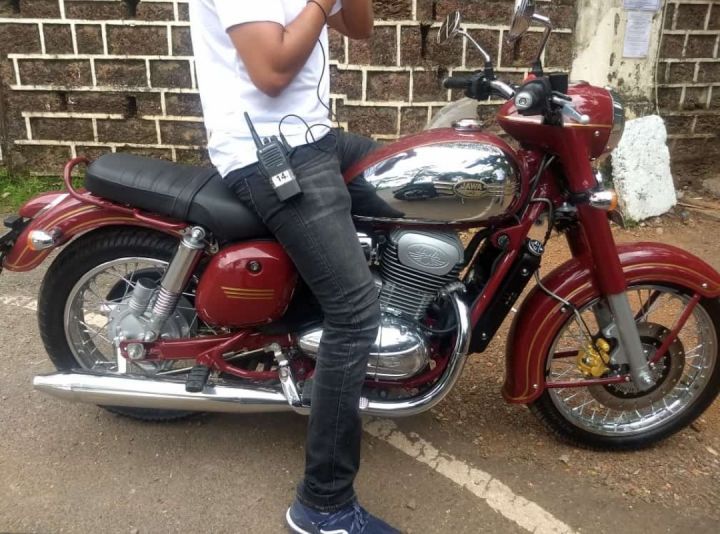 In comparison, the Jawa 300 looks like a bike that’s come straight from the 70s. Rather than creating a modern interpretation of classic Jawas, the company has worked towards making the bike look as close to the original as possible. It gets large mudguards that covers most of the spoked wheels, a two-tone fuel tank with lots of chrome accents and an airbox that’s shaped to look like the unit seen on the original Jawa 350 that was sold in India between 1970s and the 80s. The maroon paint job seen on the bike that was spotted testing recently features a golden pinstripe on the fuel tank and fenders. The seat is flat and may not be as comfortable as the Classic 350’s/ Another indicator of the amount of attention that’s gone into making the upcoming 300cc motorcycle is the level of detailing on the engine. Derived from Mahindra Two Wheelers’ Mojo, this 300cc single-cylinder liquid-cooled motor is designed to look like a classic air-cooled unit replete with cooling fins. Heck, they have even included the signature Jawa twin exhausts for added effect.

While the Classic 350 has charm, it is the Jawa 300 that wins our heart thanks to its originality and attention to detail. 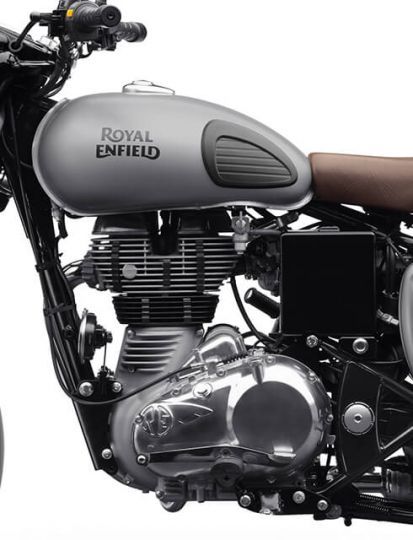 Engine
Barring the Himalayan and the new 650cc Interceptor and Continental GT, Royal Enfield’s engine architecture has largely remained unchanged. It’s 346cc air-cooled and long stroke motor still uses pushrods instead of cam chains or gears. The old school architecture gives the motorcycle a signature thump. The power output is decent - it produces 20PS of power at 5250rpm and 28Nm of torque at 4000rpm. This is a slow revving unit with a lower rev ceiling and is paired with a slow-shifting 5-speed gearbox. 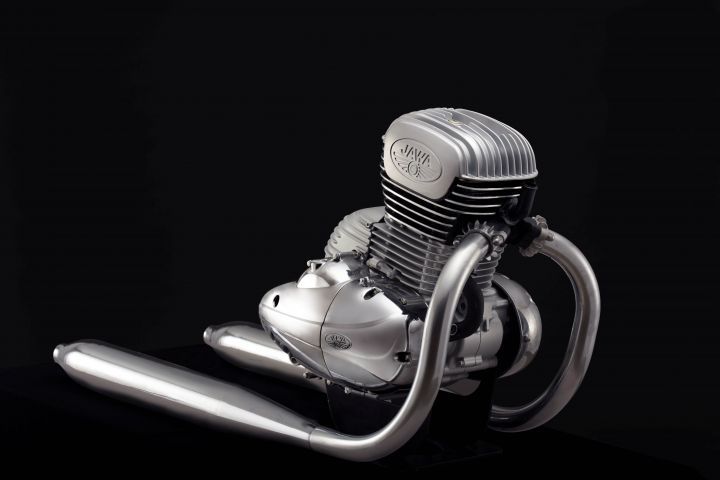 In comparison, the Jawa 300 has a modern motor masquerading as an old school unit. It gets liquid cooling and double overhead cams. This Mojo-derived unit makes a healthy 27PS and 28Nm of torque. We loved the Mojo’s motor for its linear power delivery and mid-range punch and expect this motor to deliver the same. The best part? Jawa engineers promise us that this motor delivers a soundtrack quite similar to the original two-stroke motor. We expect it to be paired with a 6-speed unit derived from the Mojo.

We love the Classic 350’s motor for its old school nature and lazy torque, but the Jawa 300’s more modern motor is more powerful on paper and is expected to be more reliable as well. The Jawa 300 wins this round. 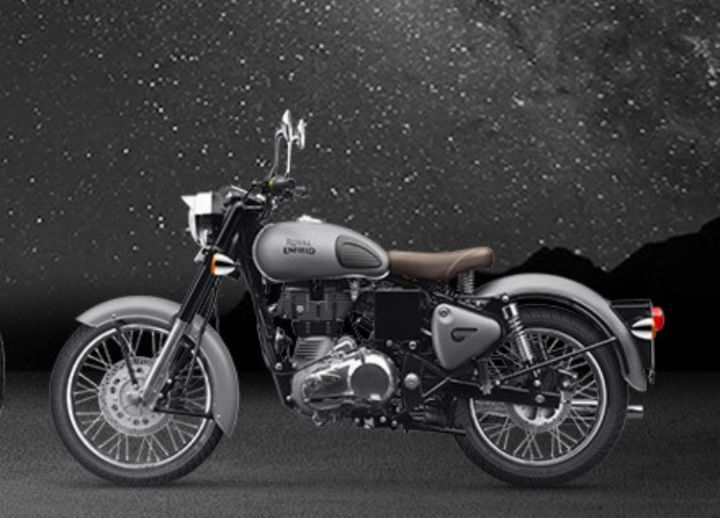 Underpinnings and Suspension
The RE Classic 350 gets a single downtube frame which uses the engine as a stressed member. It comes with a conventional 35mm telescopic front forks with 130mm of travel and twin preload-adjustable gas charged shock absorbers with 80mm of travel at the rear. It gets 19-inch front and 18-inch rear spoked wheels with 90/90 R19 front and 110/90 R18 tube type Ceat tyres. Braking is via 280mm disc at the front and 153mm drum at the rear. Some RE Classic variants get a rear disc and dual-channel ABS as well.

While Jawa is yet to release the complete spec sheet of the bike, a quick look at the test mule that was spotted recently suggests that it gets a split downtube cradle frame with telescopic forks at the front and twin gas charged shock absorbers at the rear. It seems to be running more modern 17-inch spoke wheels, possibly with tube type tyres. Braking is via a disc at the front and drum brake at the rear. It is expected to come with a single-channel ABS as standard.

Here, the Royal Enfield Classic 350 gets our vote given that it can be had with a rear disc brake and dual-channel ABS.

Pricing and Verdict
The Royal Enfield Classic 350 is priced between Rs 1.39 lakh and Rs 1.62 lakh (ex-showroom) for the Signals Edition variant that gets a rear disc brake and dual-channel ABS as standard. The Jawa 300 is expected to be priced around Rs 1.5 lakh (ex-showroom) when launched on November 14.

The Jawa 300 is expected slot neatly between the different Royal Enfield Classic 350 variants that are on offer currently. It offers a retro design with modern underpinnings that should perform well. What’s more, it is likely to be more reliable on the long run as well. Meanwhile, the Royal Enfield Classic 350 looks more modern but should offer an old school feel thanks to its motor. You also get more variants to choose from.

Ultimately the Jawa 300 offers a modern bike with a classic design while the Royal Enfield Classic 350 is a neo-retro design with old school mechanicals, which makes it feel like you’re riding something from an era gone by.