The house saw an adjournment till 2 pm within minutes of the start of the day's proceedings. It was later adjourned for the day shortly after 2 pm amid opposition protests and sloganeering in the well of the house. 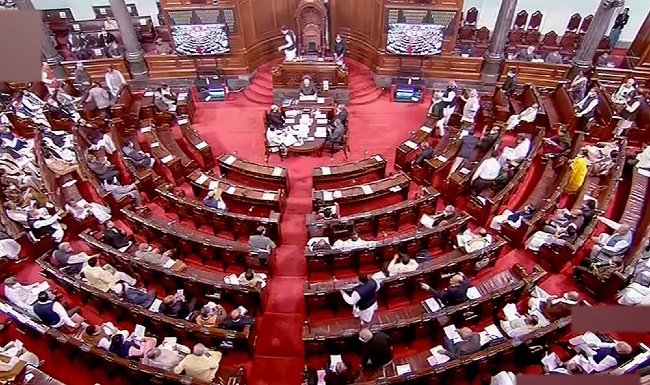 The Rajya Sabha failed to transact any business on Thursday as opposition members forced adjournments in the house over the issue of suspension of 12 MPs.

Soon after the house met for the day, opposition members were on their feet demanding revocation of the suspension of their colleagues. The Congress had also given notices under rule 267 for discussing the Special Investigation Team (SIT) report on Lakhimpur violence that left eight people, including four farmers, dead.

Soon after the laying of papers, Chairman M Venkaiah Naidu urged the protesting members to return to their seats, but they carried on with their protests relentlessly. Leader of Opposition Mallikarjun Kharge also sought to speak but the chairman did not allow him. Amid continued protests, the chair adjourned the house till 2 pm within minutes of the day.

Among other reports and papers, the report of the Joint Committee on the Personal Data Protection Bill, 2019 was also tabled in the House. “This report shows the chairman is cooperative, the government is accommodative, the opposition is responsive," said Congress leader Jairam Ramesh while tabling the report on data protection.

Earlier, the Rajya Sabha paid tributes to the valour of soldiers on the 50th anniversary of Vijay Diwas. Vijay Diwas commemorates India's victory over Pakistan in the 1971 war. Bangladesh, then part of Pakistan, became an independent country after the war.

The proceedings of the House have been repeatedly disrupted since the start of the winter session following the suspension of the 12 opposition MPs from the Rajya Sabha on November 29.

The 12 opposition members have been suspended for the entire winter session of parliament for their "unruly" conduct in the previous session in August. The opposition has described the suspension as "undemocratic and in violation of all the Rules of Procedure" of the Upper House.