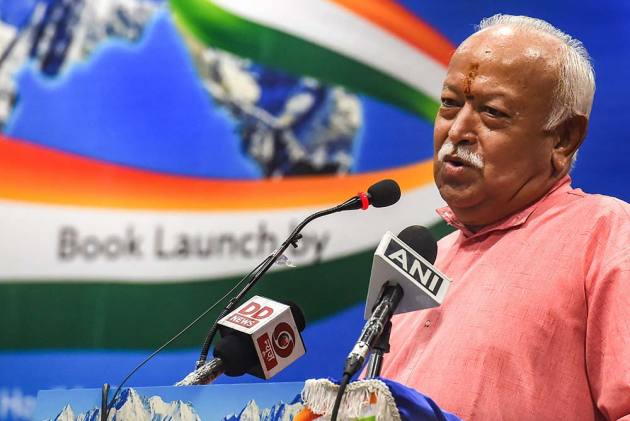 On Sunday, RSS chief Mohan Bhagwat said nothing can stop India from achieving its desired growth, provided the work is done with compassion, and assuming all Indians treat each other as their own.

The work of service and public welfare is not only about raising slogans, for it one has to be conscious and do work on the ground, he said at an awards function in Vigyan Bhawan, organised by Sant Eshwer Foundation in association with Sewa Bharti, recognising individuals and organisations working at the grassroot level for socially backward classes.

"There a tradition from the time of Vedas that assumes entire India belongs to you. This compassion towards this land which we treat as our motherland and all those born here as our siblings, our brothers and sisters. If we work with this compassion there is nothing which can stop India from growing at a desired pace. At times we feel 75 years have passed but if we wake up like this, then everything will be fine in the next 15-20 years," he said.

Bhagwat said that the way society should have moved forward after Independence did not happen but if it were to leave aside ego and make sensibility and compassion the basis, one can attain development faster.

After presenting the awards here, as the RSS chief started walking towards the dias to deliver his address, the hall started echoing with the slogans of 'Jai Shri Ram'. Bhagwat waited for a few seconds at the dias for the sloganeering to end but as it continued, he intervened, saying the work of service cannot be done by merely raising slogans and then he formally started his speech.

"In the work of service only enthusiasm is not enough, consciousness is also required. The service is not only about raising slogans, one actually has to do the work," Bhagwat said before starting his speech. "There is nothing wrong in chanting Jai Shri Ram but one should try to act like him as well," he added.

The RSS chief also cited the example of an individual seeking assistance from a spiritual leader for an election ticket from a political party while assuring the seer of doing service work thereafter.

"For the work of service and the well being of people, you don't need any authority or power and it should not be done for fame. The act of service should be part of your human nature," Bhagwat said.