RSS In The Saddle

As a parting shot, Bhagwat impressed upon his captive audience that coordination meetings were imperative to keep things smooth between the Sangh and the BJP. 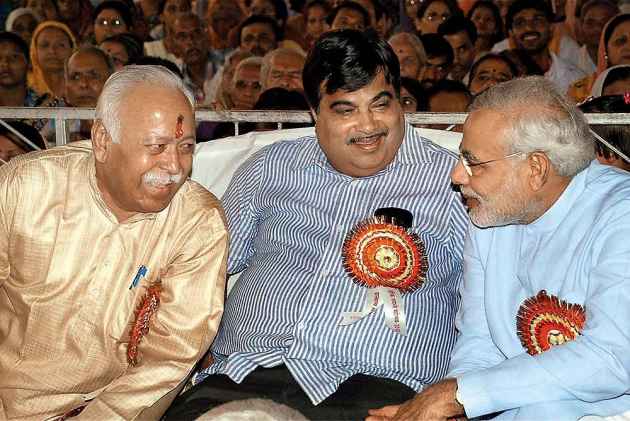 Over six decades back, in his absurdist play, Waiting for Godot, Irish playwright Samuel Beckett said, "the essential doesn't change". Interestingly, a bit of that was re-ascertained last week in Delhi's Madhyanchal, when the Bharatiya Janata Party (BJP) met its own God like Godot, the Rashtriya Swayamsewak Sangh (RSS) in what was described as a regular coordination meet.

Clearly, in the Sangh parivar, the essential has certainly not changed through the nine decades of the RSS's existence. In Madhyanchal in the posh Vasant Kunj area over three days from September 4 to 6, the RSS reaffirmed that essentially, "the BJP is just a part of the Sangh parivar, which is headed by the RSS itself." Making evident that the BJP will have to play second fiddle whenever the RSS so decides. No wonder then, when asked about last week's Sangathan-Sarkar meet, a senior RSS leader loaned out to the BJP greeted Outlook with, "Nagpur is running the nation." Promptly dismissing his statement as a media belief, in the next sentence. The truth however is hard to miss.

Especially when the national general secretary, candidly conceded, "it is very simple. Like in the West you have the Pope running religion and the Emperor running the Empire, in our parivar, we have the RSS driving ideology and culture while the Prime Minister drives the politics. The coordination meeting just re-established that fact. " A neat division of duties, one might argue, but not in saffron politics where symbols acquire significance.

So, noticeably, at the coordination meet, Prime Minister Narendra Modi, did not get the chance to have the last word. The closing address to RSS and BJP leaders along with representatives of 40 of Sangh's affiliated organisations was delivered by the RSS Sarsanghchalak, Mohan Rao Bhagwat. As a parting shot, Bhagwat impressed upon his captive audience that coordination meetings were imperative to keep things smooth between the Sangh and the BJP. The message that RSS is firmly in the saddle had been delivered. Along with another missive that the BJP must toe the RSS line at all times.

For his part, Bhagwat had been intending to convey the RSS's assertion to the BJP since the RSS's annual national organisational meet held in July in Nainital. At the meet, Bhagwat had repeatedly been told that the BJP wasn't "paying attention to the Sangh's demand and desires." Unanimously, participants at the Sangh's Akhil Bhartiya Pratinidhi Sabha (ABPS) had urged Bhagwat to discipline the BJP, now that the RSS's self-imposed moratorium of not interfering in governance for a year had expired.

For the RSS the coordination meet couldn't have been better timed. With the Bihar polls slated for October, the BJP found itself pitched against the secular combine of Nitish Kumar and Lalu Prasad Yadav, without a sound organisational structure in the eastern state. In such a scenario, the RSS with its effectual organisation in Bihar became imperative to the BJP's campaign machinery. After all, the BJP had learnt its lessons with the RSS's effectiveness in garnering electoral support in the Lok Sabha polls of 2014 and had further realised the necessity of the RSS's helping hand after dealing a humiliating blow from Arvind Kejriwal in the Delhi polls. Clearly, for now the RSS is practically indispensable for the BJP if it wishes to make a dent in Bihar. Annoying the RSS would be a mistake given the fact that like Delhi, Modi yet again, is the face of the BJP's campaign in Bihar. A defeat like Delhi then, would be disastrous for the Prime Minister himself.

So for three days, minister after minister queued up at Madhyanchal to address the Sangh leadership on the work done by their ministries and share future plans. A source confirmed, "presentations were made by all the ministers in Modiji's cabinet." Adding that while ministers like Sushma Swaraj, Arun Jaitley, Nitin Gadkari, Rajnath Singh and J P Nadda, who are part of the BJP's parliamentary board marked their presence all through the three days, other ministers made an appearance in their assigned time slots.

An insider who attended the meeting told Outlook, "all ministers outlined their priorities to the Sangh leadership. From finance to corporate affairs, agriculture to foreign affairs everything was discussed." In fact sources confirm that besides Arun Jaitley briefing the Sangh leadership on the economy, Sushma Swaraj laid down her ministry's priorities in the order, "engaging with immediate neighbours as first, followed by extended neighbours, Hindu-Buddhist line, Ramayana linkage and cultural linkages." Sources confirm, that while the BJP leaders listed out achievements and aspirations, the RSS had its own suggestions for governance to add on.

But was it absolutely compelling for the RSS to come out of the closet to wield its baton? A former ideologue of the party explained, "a year in government has made the Sangh used to the trappings of power now. There is such a huge erosion of moral and missionary zeal in the RSS that the power and attraction of political glamour has taken over." Describing the coordination meet as a huge blow to the RSS's own stature, the ideologue further added, "there was no need for openly conducting a coordination meet when the channels for communication with the government have always been open. This will have a catastrophic effect on the Sangh itself."

While so far the RSS had driven its agenda from the outside through affiliate agencies like the Bhartiya Mazdoor Sangh (BMS), Bhartiya Kisan Sangh (BKS), Swadeshi Jagran Manch (SJM) insiders believe that the need to do it openly now stemmed from the Sangh's desire to reclaim centrestage. A Sangh leader told Outlook, "post general elections, the BJP had pushed the RSS to the fringe in decision making. The party was also hard at work to establish its own organisation at the ground level through its membership drive. We had to start asserting ourselves someday." This despite the fact that the Sangh leadership had constantly held consultation meetings with ministers like HRD boss Smirti Irani, Piyush Goyal, Nitin Gadkari and others at Delhi's Deen Dayal Upadhyay Research Insitutute (DRI) in Jhandewala, a stone's throw away from the RSS headquarters, Keshav Kunj.

Even as BJP leaders in Delhi dismiss the coordination meet as a "regular exercise going on for years now," those close to the RSS leadership say, "it should be considered as an extraordinary meeting." Adding, "if you remember the period between 2009 and 2014, before Modi came to power, the Sangh was extremely worried about its own existence and that of the BJP. The reason why it decided to support Modi was because it wanted to be back in power. It was a question of their own survival." He further added, "what it is doing now is to simply vindicate its superiority."

Perhaps that may be true. Insiders point out to RSS's new avatar. An RSS leader said, "being in government is fine but we also need to constantly motivate people towards our ideology. The BJP and the RSS have always had a united existence and approach. So, if the BJP is growing in electoral numbers, should the Sangh not grow in stature as well?" Perhaps the Sangh's confidence to stake claim comes from the galvanising growth of its shakhas. In the last one year, the RSS has tasted popularity with over 15 Lakh likes on its Facebook page and over 1.5 lakh followers on its Twitter account. On the ground, the shakhas have grown magically, with a near 29 per cent growth in the number of daily shakhas, 61 per cent growth in weekly shakhas and a 40 per cent growth in monthly shakhas. The total number of active shakhas in the country is at an all-time high of over 55,000. Clearly, the RSS realises that much of this growth is linked to the popularity of its own pracharak turned PM, Narendra Modi.

Reason why, the Sangh wants to play Big Daddy publically now. It is with this in mind that the Sangh leadership is no longer shying away from taking credit for sorting the OROP stalemate or steering the Indo-Pak dialogue in pursuit of its dream of an Akhand Bharat. Not just that, the RSS's enhanced profile is evident in the CISF guarding the Nagpur headquarters, Z plus security to its leaders and revamp work going on in the Sangh headquarters in Delhi to turn the dilapidated premises into a glitzy state-of-the-art headquarter. Certainly, Sangh supporters are on a high. Encouraged by their leaders, even Governors are finding voice to express their Hindutva and RSS leanings candidly.

For senior BJP leaders loyalty to Sangh is on a premium. A BJP leader told Outlook, "it is not the BJP parivar. It is the Sangh parivar and the Sangh's right to question and guide us. Sangh is the nucleus." All this even as first generation Sangh leaders fear that RSS-BJP meetings like last week's will only "bring down the stature of the RSS because now even the RSS is accountable to the people." They add, "the RSS will no longer be able to distance itself from the incompetence of the government. No one is thinking that it is detrimental in the long run. This open admission is a first. It has never happened before."

Feasibly someone in the RSS is quoting, Samuel Beckett's radio play, Embers, "the aspirations of yesterday were valid for yesterday's ego, not for today." After all, the intoxicant of power is a pleasure of the present, not the future. Even for the Rashtriya Swayamsewak Sangh.