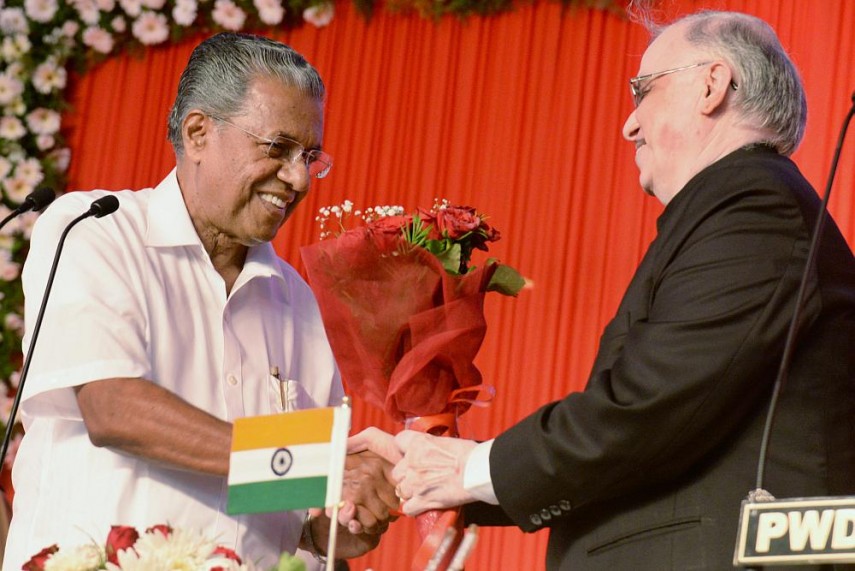 A day after an RSS worker was hacked to death here, Kerala Chief Minister Pinarayi Vijayan and state police chief Loknath Behera today met Governor P Sathasivam in response to a Raj Bhavan summons to ascertain the action taken by the government in the case.

A Raj Bhavan statement said the chief minister and police chief were summoned in the wake of recent incidents of violence in the state capital, including the murder of an RSS functionary yesterday.

"Chief Minister informed that culprits in murder of RSS worker in Trivandrum arrested & that lawbreakers will be sternly dealt with," he said.

The governor said the chief minister assured that law breakers would be sternly dealt with, "irrespective of status or political affiliation".

Vijayan met the governor around 11.30 am, while the DGP met Sathasivam at 12.30 pm, the governor's office said.

Vijayan also informed that he would be meeting state BJP president Kummanam Rajasekharan and state RSS Chief, it said.

The governor asked the DGP to take all possible measures to book the culprits and maintain peace in the southern state.

Sathasivam also spoke to Kummanam Rajasekharan about the incident and the attack on the BJP party office here.

According to the statement by the Raj Bhawan, the governor also spoke to CPI(M) state secretary Kodiyeri Balakrishnan to enquire about stone pelting at his son's residence here.

Sathasivam also had a word with Union Home Minister Rajnath Singh and apprised him of the situation and measures taken by the state government.

Police have so far taken six persons into custody in connection with the slaying of the RSS worker here even as the BJP called for a dawn-to-dusk state-wide hartal today to protest the incident.

The hartal has so far been incident free.

A gang led by a history sheeter had attacked 34-year-old RSS 'karyavahak' Rajesh and hacked him to death. His left arm was chopped off and there were several injuries all over his body.