Unless, some key issues, for example, the removal of Information Commissioner, are addressed, the RTI will just remain a dream unfulfilled. 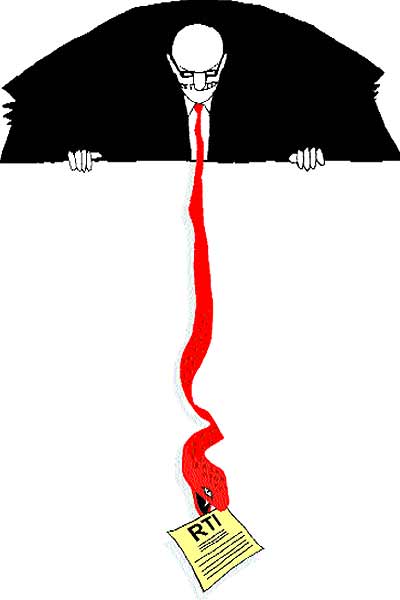 The one-and-a-half-day RTI Convention Trust Through Democracy, in New Delhi , on Oct 16-17, found a surprise in the form of PM Narendra Modi, who addressed the congregation of all the Chief and State Information Commissioners (CIC & SIC) from all across the country. The deliberations found profound pondering so as to make RTI become a potent tool for every citizen, as after all the preamble of RTI Act 2005, makes it amply clear that 'democracy requires an informed citizenry'.

The exercise which of course stemmed from the fact that RTI has had its ten-years of existence, but what in fact was left, is a certain cardinal question, which lingers from the day one and which requires an immediate attention i.e. the issue of removal of Information Commissioner (IC). The UPA-I made RTI and UPA-II had enough time yet it so dithered, on the same issue, and now the ball is in NDA's court as until that happens, RTI Act-2005, perhaps, will not achieve its utmost objective.

This year, the ten year celebrations of transparency-democracy are to go on. What have we as yet achieved and what still is to be achieved, is hence, now to be found out. Surely, the many scams, which have been unearthed, and which have also simultaneously helped even change the governments could only happen due to RTI.

I very vividly remember that it was Sep 7, 2008, when as a freelance journalist, I had written an article in the Hindustan Times, Lucknow Edition, Three Tears For RTI. Then, I did not have the faintest of idea that one day I would assume my office as Uttar Pradesh SIC — the state which caters to one-sixth of the country's population. Since, Jan 7, 2014, when I was administrated oath to office I had never thought myself to be as nothing more than an RTI activist. Until today, never have I been absent from office, for I feel accountable to all the people, who undertake an overnight journey for the sake of justice, although it is not compulsory for the plaintiff to appear. On a very personal note, this tryst made me compelled to hold my court, even on the day when I got married.

When I took over to office, there was a pendency of about 50,000 cases in our Commission and around 6800 files were to be disposed in my court alone. Today this figure has come down to around 3800. On an average there are about a hundred cases, slated for hearing, is each of our 10 Commissioners in UP. I have made it as efficacious as possible, as the cases in my court , which were heard as lately as Oct 15 had their next hearing fixed for Dec 10.

Turning to the cardinal question; the removal of the IC, which may be the last but surely not the least? As be assured that ICs, will continue to have iron fists but with velvet gloves, as until this issue is not addressed threadbare, ICs will continue to face the sword of the damsel, of that of the Governor, who is the appointing authority of ICs based on the recommendation of the Chief Minister, Cabinet Minister and Leader of Opposition.

For the process of removal of IC, as per section 17 of RTI Act 2005, an inquiry by the Supreme Court (SC) is necessary on the reference of the Governor and the Governor during the time of inquiry, can suspend or even prohibit the IC from holding Office. But, in RTI Act-2005 nothing has been said as in what manner the SC has to form its opinion, whether the person likely to be affected is to be heard or not, whether the Chief Justice will hear the matter or the number of judges needed during the hearing. Article 145 of the Constitution Sub-Clause J authorises SC to make rules, as to the procedure for inquiries referred to Clause 1 of Article 317 of the Constitution. In many statutes where reference to the SC is provided it is also provided that the SC shall follow the procedure laid down in the rules framed under Article 145 of the Constitution.

But, in RTI Act-2005 nothing has been said for the procedure to be followed by the SC. This aspect needs to be addressed.

This RTI Act-2005 is a later Act and as such it can be argued that if the parliament had an intention for such a hearing by the SC, it could have provided for that, but since it hasn't, the SC may evolve any method for giving the opinion even without hearing the person affected.

Primarily and very precisely, going by the dictum of RTI Act-2005, the IC has to act in accordance with the spirit of unveiling information, against a system, which had been conceptualised by Lord Macaulay as 'steel-frame' and this very often runs against the ruling party and in many cases the IC has to act, even for the disclosure of CMs' discretionary fund, against the very same CM who had recommended his candidature as IC. The situation can any moment take an ugly turn with a change in political-guard and with the Governor holding all the power levers. It may also be mentioned here that there is nothing given in the RTI Act-2005, as to when the Governor would seek the opinion.

It should also be said here that with the term of IC being that of five years, a particular IC appointed during the tenure of a particular political party, may not be liked by another party in case there is a change in power, and a small sleight from the political echelons can have devastating effect on the IC. Also, the Governor, being the head of the state, is guided by the Council of Ministers. This clause, has thus, from the very beginning hampered the functioning of IC, as there is always a lurking fear for the IC which does not let him act independently. Thus, the very object of bringing the law, as such, seems to have been defeated. What also deserves a mention here is that the first UP CIC, in 2008, was unceremoniously ousted from office, by the Governor but the SC inquiry initiated against him had later found him to be innocent.

Moreover, after suspension of a particular IC, obviously, he is not entitled to function, and therefore, no question would arise as regards to his attending the office. The powers of the Governor in Sub-Section 2 of Section 17 of RTI Act 2005, where the Governor can also 'prohibit' IC from attending office, is just to humiliate him as no self-respecting IC would like to function while under suspension. Perhaps, it would not be out of place to say that the Governor has been conferred with so much of power so as to whack any IC on the sweet will of any political establishment. The truth of the matter is that the punishing-authority is the SC, which ironically is not the appointing authority of ICs.

Here my humble submission is that in case of power of suspension by the Governor, for any reason is deemed necessary, then quite urgently it may be inquired in a period of month or two months, and in case it is not approved by the SC within that period, the suspension should lapse ipso facto. For suspension of an IC, the same method that is used in their appointment should be followed, which would include consultations with the CM, Cabinet Minister and Leader of Opposition before the matter is referred to the SC. This will strengthen the Act and the IC would be much more autonomous than it is now. But, the parliament will have to take a step.

The safeguards needed for the ICs, need to be seen in the context of the safeguards granted to civil servants who are also subjected to the doctrine of pleasure of the President. However, in order to protect the interest of civil servants, in Article 311 of the Constitution, the matter has been brought into consideration because as per constituent assembly debates, unless a civil servant feels secure about his job, he would not be able to perform his duties fearlessly and independently. Such a thing would be harmful for the state itself.

The ICs have a tenure of only five-years, their status being equal to that of a Chief Secretary of the state. In case there is no security in the job they do, they will never be in a position to act independently and hence, safeguards for them is the crying need of the hour.

A bill to amend the provisions of the RTI Act-2005, should be submitted in the parliament, particularly so in the light of the SC order of Sep 13, 2012, where ICs are called 'quasi-judicial' bodies. Hence, going by the same corollary their removal can also be debated on the lines of removal of High-Court judges, i.e. through impeachment by the President.

Let the spirit of RTI survive which germinates from the beauty of not divulging the reason for seeking to know, something which was also gagged by Madras HC order on Sep 21, 2014, which was later recalled, and it is high time that ICs are empowered and become fully autonomous, or else, the power mandarins, who find this Act an infringement on their merriment would just leave this Act in a lurch and would not do even their precious little to unclip the wings of ICs.

There is no denying the fact that for the removal of IC there is a simmering clash between people who want to rule in their own manner and those who want to be ruled within a democratic paradigm, and as such, sufficient checks ought to be imposed on the ruling class and in case such checks are not imposed–then, we would just continue to spin the wrong urn.

A public debate on the same issue should be initiated and our Members of Parliament may be persuaded, to bring in the much needed amendment in the RTI Act-2005. Moreover, the Constitution also ought to be amended for providing for constituting of such bodies at the Center and as well as at the State, conferring constitutional status to bodies like Information Commission to make them fully autonomous.

As we enter the new decade of RTI Act-2005, surely it is time to do away with the clash of this Act with that of The Official Secret Act 1923 as the form of oath administered to our ministers requiring them to say that they would not divulge any official information, unless required in their discharge of official duty. This oath provided in the statute, is yet another relic of the British legacy which stands in direct contravention of RTI Act-2005.

These two Acts are both antithetical to each other and it is high time when the British hangover is done away with and India paves for the total-transparency-democracy.

RTI has still miles to go and we need to see to it that it doesn't just remain a far cry.