The apex court is also examining whether a person, who doesn't belong to a particular faith, can file a PIL questioning the religious practice that faith. 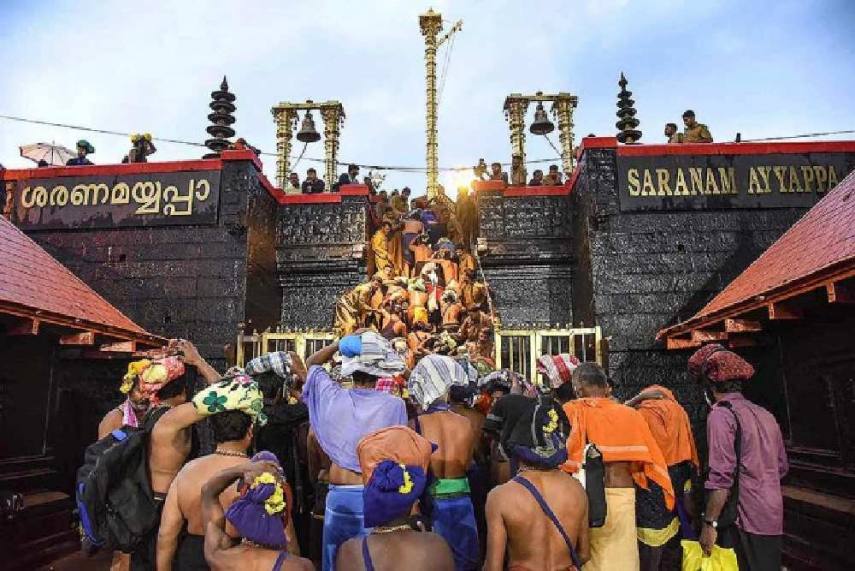 A nine-judge bench of the Supreme Court observed on Monday that making offerings at places of worship may be a religious practice, but the law can regulate the money donated at such places if it is used for "terrorism" or "running casinos".

The top court said the old practices of "human sacrifices" and 'sati' amounted to murder under law and could not be saved on the ground of "essential religious practice".

The Constitution bench, headed by Chief Justice S A Bobde, made these observations as it commenced hearing to deliberate upon the issues pertaining to the scope of freedom of religion as also of judicial scrutiny into "essential religious practices" of separate "religious denominations".

The bench is also examining the issue of whether a person, who does not belong to a particular faith, can file a PIL questioning the religious practice of another religion or sect of a religion.

The questions have arisen out of a judgement in the Sabarimala case.

"The IPC can be read as the guard against the practice of human sacrifices, because it is murder under the IPC. Likewise 'sati' also amounted to murder... Even a religious aspect can be the subject matter of reform," said the bench which also included justices R Banumathi, Ashok Bhushan, L Nageswara Rao, M M Shantanagoudar, S A Nazeer, R Subhash Reddy, B R Gavai and Surya Kant.

Examining the scope of judicial power in religious matters, it gave illustration of the practice of giving offerings or money in temples and said they were part of religious practices.

"But if money is being used for terrorism or for running a casino etc. then this is secular part of the religion and can be regulated by the law," it said.

It also said financial activities of a religious trust pertaining to "donations, hygiene and health" can be regulated by laws.

"Even if there is an essential religious practice, it can be regulated if it affects the three grounds (public order, morality and health) in Article 26," Solicitor General Tushar Mehta said while initiating submissions on behalf of the Centre.

"This is the hallmark of our Constitution," the bench said while giving examples of practices of "human sacrifices" and 'sati' being held illegal.

Mehta referred to Articles 25 and 26 and said all persons have freedom of religion "subject to public order, morality and health" and every "religious denomination" shall have the right to establish, own, maintain and manage religious institutions.

"Defining 'religious denomination' would be the most crucial part during the course of this hearing", he said.

Referring to various judgements, Mehta said there were two striking features in them which were "the affected parties were present and there was a challenge to a specific law".

The bench, which assembled at 10.30 AM for hearing the Sabarimala reference, rose around 11.45 AM for 10 minutes, but it did not re-assemble and adjourned the hearing till Tuesday as one of the judges was feeling unwell.

As the hearing commenced, senior lawyer K Parasaran apprised the bench of the lawyers and their order in which they would argue and said that Mehta would open the case on behalf of the government.

Senior advocate Indira Jaising and other lawyers supported it saying that they wanted to know the stand of the government in the matter.

Mehta said, "Can there be a PIL by a person not belonging to a particular religious denomination" and gave examples of various sects like 'Shaiva', 'Vaishnava' and 'Shakt', saying that separate group of persons cannot satisfy the requirements of a particular denomination.

"Asking somebody to perform 'namaz' in a particular manner amounts to interference into somebody's religion," the bench asked.

"You are saying the word religion is something which determines the relationship of a man with the creator and all these sects or denominations have the right to regulate and decide the nature of this relationship. And someone outside the denomination cannot decide as to what is the essential religious practice...,' the CJI asked.

"Are you saying, you can't have a situation of Muslim questioning Hindu practice and where Buddhist cannot decide Muslim practices," the bench asked.

The law officer said the State or the court can intervene if any religious practices relate to public order, health and morality.

There were two things for court's consideration, and one of these is the modes of "worship, rituals, observances, ceremonies" which constitutes a religion, the law officer said.

The other is whether a particular facet was "essential religious practice" or not and who, either the court or the religious denomination itself, will decide the nature of that practice, Mehta said.

The bench had framed seven questions pertaining to fundamental rights on religion and their interplay with faith and would evolve a judicial policy to deal with them.

Another question pertains to whether rights of a religious denomination under Article 26 are subject to other fundamental rights apart from public order, morality and health.

"What is the scope and extent of the word 'morality' under Articles 25 and 26 of Constitution and whether it is meant to include constitutional morality," read a question.

The bench said it would also examine the "scope and extent of judicial review" with regard to religious practice as referred under Article 25 of the Constitution. PTI SJK RKS SA