Kerala has been witnessing massive protests by Ayyappa devotees opposing the entry of girls and women of menstrual age into the Sabarimala temple since the government decided to implement the apex court order. 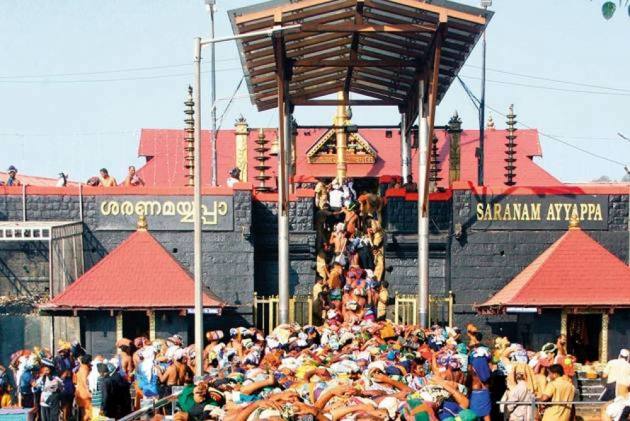 As women in the menstrual age group try to enter Sabarimala Temple for the last day of the "darshan", security has been tightened at the hill shrine and other pilgrim centres connected to it on Monday.

Earlier on Sunday, a large number of devotees did not let six women enter the temple situated on the hill, raising strong opposition against the entry of girls and women in the menstrual age into the "naishtika brahmachari" temple.

Section 144 Fails To Control The Crowd

Hundreds of Ayyappa devotees have prevented 12 women from entering the temple despite 144 being imposed.

Section 144 was imposed on October 18 in four regions of Kerala-- Sannidhanam, Pamba, Nilakkal, and Elavungal--to prevent people from gathering and protesting against the entry of women in the Temple.

According to latest reports, a woman armed with the Supreme Court order -- permitting the entry of all women into the shrine -- has approached the police, seeking help to offer prayers at the temple as the stand-off over the entry of women of menstrual age into the famous hill shrine continued for the sixth day.

Police is acting strictly after women complained against restrictions from entering Sannidhanam and other areas.

By all available indications, not a single woman in the age group of 10 to 50 years has so far reached the temple which would close Monday at the end of the monthly puja.

When Was The Restriction On Women Imposed?

The Sabarimala Temple was not of importance until it was re-built following a 1950 fire. In 1955 and ’56, the Travancore Devaswom Board, which controls the administration of Sabarimala, decided to ban women between the ages of 10 and 55 from entering the temple, noting that this was contrary to the fundamental principle underlying the pratishtha (installation). (Read full story)

Supreme Court May Consider The Petitions On Sabarimala Verdict

Kerala has been witnessing massive protests by Ayyappa devotees opposing the entry of girls and women of menstrual age into the Sabarimala temple since the government decided to implement the apex court order.

Amid agitation against women, Supreme Court announced that it would announce dates to consider the petitions seeking review of its Sabarimala verdict allowing entry to women.

On September 28, a five-judge Constitution bench of the Supreme Court, headed by then chief justice Dipak Misra, lifted the centuries-old ban on the entry of women of menstrual age into the shrine.

(with input from PTI, ANI)