An elderly woman and a few other peoples were injured as police tried to disperse the crowd shortly before the temple of Lord Ayyappa was to open for monthly pooja. 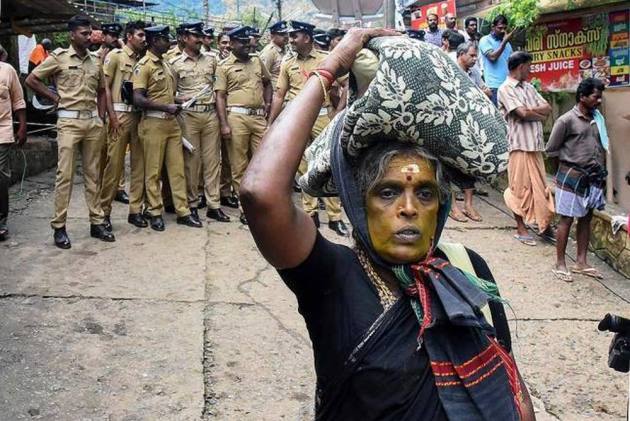 Ayyappa devotees opposing the Supreme Court verdict on women's entry into Sabarimala temple turned violent on Wednesday and clashed with police, who resorted to baton-charge.

An elderly woman and a few other peoples were injured as police tried to disperse the crowd shortly before the temple of Lord Ayyappa was to open for monthly pooja.

A tense face-off was witnessed at Nilackal, the base camp, since morning with the protesters laying siege to the road leading to the famous hill temple, about 20 km from here, and blocking young women, including journalists.

Trouble broke out as the agitators, who are opposing the decision of Kerala government to implement the apex court lifting a ban on entry of women of menstrual age into the temple, continued to block vehicles of pilgrims and pelted stones, disregarding repeated requests by police to desist from such acts.

As police began a crackdown, the protesters fought pitched battle with them. Later the police used lathi-charge to disperse the protesters, several of whom ran helter-skelter and entered the nearby forest area.

The injured woman was bleeding from her head and was later taken away from the clash scene.

Several vehicles were also damaged in the stone pelting as tension continued to prevail in the area.

The Lord Ayyappa temple will open at 5 pm for the five-day-monthly pooja of the Malayalam month of Thulam, the first time since the apex court allowed entry of women of all age.