There's an intriguing juxtaposition between the violence of the art-work and the violence of nationalism. Which perhaps explains why the educated middle class is essentially in agreement with the VHP that art shouldn't "cause offence". Once the events in Baroda came to a head, they couldn't be ignored, partly because of the persistent queries they raised. What is a 'work of art'? they seemed to ask. Is it meant for edification or amusement, or some other, mysterious purpose? By some coincidence, it being May -- a month that exacerbates tempers, but also a fecund time, apparently, for bringing poets and artists to the world -- the birthday celebrations of Satyajit Ray and Tagore were taking place at almost the same time as the internal examinations at M.S. University, which were to be turned by the VHP into an occasion for a larger quarrel. The celebrations, too, their idiom of documentary footage, speech-making, singing, and the relentless (yet, nevertheless, intermittently exciting) exhibition of two oeuvres -- Ray's and Tagore's -- brought these questions to me in a wholly different register: 'What is a work of art?'; 'How do we protect it?'; 'Does it need protection?'

The last question probably needs competing answers depending on the context in which it is asked. In relation to Chandramohan's examination entries (the one I've seen a picture of consists of a crucifix with a penis hung above an expectant 'urinal'), the answer is an unequivocal 'Yes'. (Chandramohan, though, uses the commode rather than the lavatorial urinal in his exhibit; its renaming refers to a piece of canonical art history I'll return to presently.) 'Yes', because this particular art-work, despite being produced by a student -- or perhaps because it was produced by one -- has educative qualities that the vigilantes have missed. Firstly, it's salutary to be reminded of the role of physical evacuation in our national, spiritual, imaginative life; it's at least as necessary as the faux-Victorian messages -- such as "Cleanliness is next to Godliness" and "Commit no Nuisance" -- that are scattered through our public spaces. The counterpoint to those god-like ordinances is not the solitary man shitting on the railway tracks, who's either humbled by not understanding what the signs mean, or ignores them altogether; the counterpoint lies in the transformation of excretion into representation, 'urinal' into art-work, which sends out its own, equally strong directive.

Secondly, like many others before him, Chandramohan is asking his viewers to reconsider rival definitions of the sacred, with an evangelizing zeal, even youthful obviousness. For, as we well know, ever since Marcel Duchamp decided in 1917 to display one, upside-down, in an exhibition space and call it Fountain (his intentions were thwarted not by a culture police, but by the organizers), the urinal has become a sacred, epiphanic object in the history of modern art, and, through over-exposure, almost as unpromising a symbol as the cross itself; it is, therefore, in constant need of reinvention. India, with its proliferating but repressed bodily life, is as good a site as any for the resurrection of the urinal. 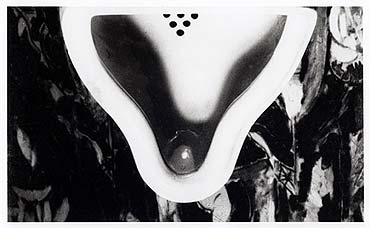 The Fountain by R. Mutt by Marcel Duchamp, photographed by Alfred Stieglitz, courtesy, the Metropolitan Museum of Arts

One route towards reinvention is parody, which is palpably among Chandramohan's registers. How long has the lone, erect, standing-up action of male urination been associated with the parodic, slightly scandalous conundrum of modern art in the popular imagination? The English phrase, "taking the piss", which means to mock or make fun, or make a fool of somebody, and which has been in currency for a while, might well have originated as a shrewd working-class observation on the Duchamp readymade.

But to return to the question: 'Does art need protection?' -- if the context in which it's put resembles the birthday celebrations of Ray and Tagore, the answer must be 'No'. With Ray, it's still possible to view the art-work -- in this case, the film -- outside of the parameters of ritualized obeisance, and be compelled again by it. With Tagore, it's become much more difficult, so mediated is he, to us, through his interpreters: the various professional readers, singers, and dramaturges who gather tirelessly around his work. Not long ago, before the wailing, earnest fanfare of 25th baisakh was under way, I was invited to a mansion to attend a reading from the poet's works: a preamble of things to come. The event took place in an elegant, chilly drawing room, and the intimate, physical interface between performance and audience made me think that the person who'd put this together had paid quite an unexpectedly convincing homage to Jorasanko, towards luxurious domestic setting, almost Buddhist in its composure, and the persistence of space, narrative, and human expectation in the midst of it. 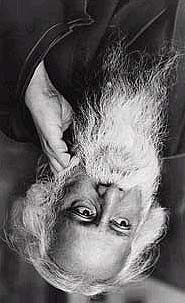 And yet, having borne the brunt of many Tagore-songs in my life, a certain soaring quality in their author almost unfailingly troubles my darker side. I could see his portrait hanging on a wall on the left, sage-like but for the teenager's romantic eyes, and was discomfited to feel an irresistible urge to turn it upside down. I suppose a small wave of irritation was the cause; but it was also to escape that gaze, which had taken in such an extraordinary amount of the world, and which we no longer notice. I began to speculate about what might justify an upside-down picture of Tagore as an art-work. Because it takes very little, a gesture, even a strategic knock, to move an object from the space it ordinarily occupies into the one we call 'culture'. Personally, I don't think of Tagore, in the incarnation in which he's presented to us, as 'culture' except in a nationalistic sense: and it's nationalism that explains the tone in which the songs are sung, poems recited (the performance that evening, to be fair, was, in spite of being intermittently tremulous, an intelligent exploration of the relationship between reading and setting), and the manner in which he and Ray have often been verbalized in the last fortnight.

My latent impulse towards vandalism (which predated the Baroda episode by more than a week) can, in retrospect, be related to and perhaps contrasted with the vandalism that informs the VHP's activities. Art's more anarchic impulses are deeply anti-nationalist in nature; this is something Tagore knew first-hand. And yet there's an intriguing juxtaposition between the violence of the art-work and the violence of nationalism, especially in these days of immediate technological reproduction. 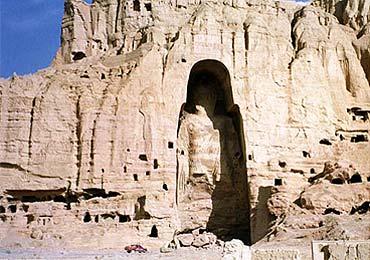 The righteous arbiters who blew up the Bamiyan Buddha (and it's nationalism, more than religion, that sanctions such outrage) were, in allowing their 'work' to be recorded by a camera, disseminating it to two kinds of audiences, in order to vindicate and satisfy one, and shock and awe the other. But, in letting the moment be reproduced, by permitting it, in effect, to pass into the realm of symbolism, they were also letting its purpose be altered forever. Very little -- only a question of syntax and symbolism -- separates the violence of art-work from that of nationalism, and from the possibility of one rearranging the other in its own language.

Both 'art' and religion have long been (in the latter's case, with a vicious new emphasis in the last twenty years) assimilated into a form of nationalism in our country; this is why Hinduism, in the way it's elucidated by Radhakrishnan, or represented in cinema, is often vacuous or assertively pious; it also explains the piety with which the Tagore-song is rendered. This isn't world-denying spiritual piety; nor is it an example of an Arnoldian 'high' cultural piety; it's the piousness of nationalism. That's why it's no surprise to learn that a survey has discovered that the educated middle class is essentially in agreement with the VHP that art shouldn't "cause offence". 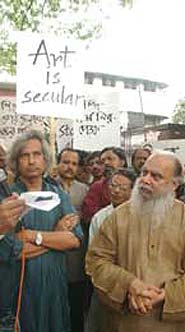 Here, let's have a quick look at a word that's come up anew in the last week, with a resonance it doesn't usually have in this country. In a photograph of the protest at the Academy of Fine Arts, published in The Telegraph, a sign hovering over the heads of Jogen Choudhury and Shuvaprasanna declares, "Art is Secular". This word, 'secular', given to us by our Constitution, was famously reinscribed in our national life as a noun, 'secularism', with a very particular meaning: respect for a plurality of cultures and faiths. In this way, the 'secular' becomes an embodiment of nationalism, and intellectuals in India conduct a discussion that's primarily nationalist, based on a constitutional understanding of the word, when speaking of it. Yet the sign saying "Art is Secular" is not so much defending a feature of the Indian nation-state as it is an aspect of Indian modernity; this distinction needs to be made; the fact that it isn't leads, in part, to the abrasions we've been witnessing recently. The interior, creative life of the 'secular', which is one of the most crucial constituents of our modernity, of, in effect, ourselves, has never been fully acknowledged in India; and it has no constitutional defence, unless you place 'art' under the inadequate rubric of 'freedom of expression'. After all, 'culture' is neither a faith, nor a linguistic state, nor a recognized world-view. How do we defend 'art' as Indians unless we admit to ourselves that there are other laws and values that govern our lives as 'secular' human beings besides the constitutional ?

The photograph above of Jogen Choudhury and Shuvaprasanna appears courtesy, The Telegraph of Calcutta where this piece first appeared.