Sirsa had earlier quit the Shiromani Akali Dal (SAD) and joined the BJP. Sirsa on Friday said he withdrew his resignation as a stopgap arrangement to address administrative issues and he will continue as the gurdwara panel chief till a new president is elected in the elections in January. 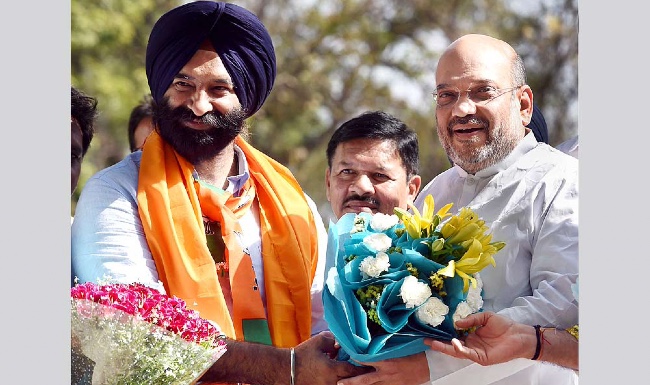 The Shiromani Akali Dal on Friday accused the BJP of the bid to take control of the Delhi Sikh Gurdwara Management Committee, hours after Manjinder Singh Sirsa withdrew his resignation as the president of the body.

In a statement here, the SAD called BJP’s "attempt" a direct interference in religious affairs of the Sikhs. "It is clear that the latest move of Mr Manjinder Singh Sirsa to withdraw his resignation as president of the DSGMC has been done at the behest of the BJP," said SAD leaders Balwinder Singh Bhunder, Prem Singh Chandumajra and Daljit Singh Cheema.

"The party is behind this naked attempt to take over control of the religious body," they said. Terming Sirsa's move as "immoral", the senior SAD leaders said the Sikh community will not "tolerate" this. They also claimed that the move was illegal and unconstitutional.

"Now, instead of forming the new committee, Sirsa is being thrust on the DSGMC with the tacit support of the BJP," they alleged. The SAD leaders alleged such unscrupulous tactics would not help the BJP in any manner whatsoever.

"In fact, the move will alienate the Sikh community from the party. The BJP must immediately stop all efforts to take over the management of the DSGMC through proxies like Sirsa," the leaders said.

Sirsa, however, in Friday claimed that the resignation tendered by him from the post of the DSGMC president was not accepted due to technical and legal issues. "I withdrew my resignation to address administrative problems like release of salaries of the employees. I will be there till a new chairman is elected in the elections to be held in January next year," he told PTI.