The Municipal polls underline that Mumbai remains—or has returned to being—a saffron city, with Raj Thackeray emerging as the biggest gainer 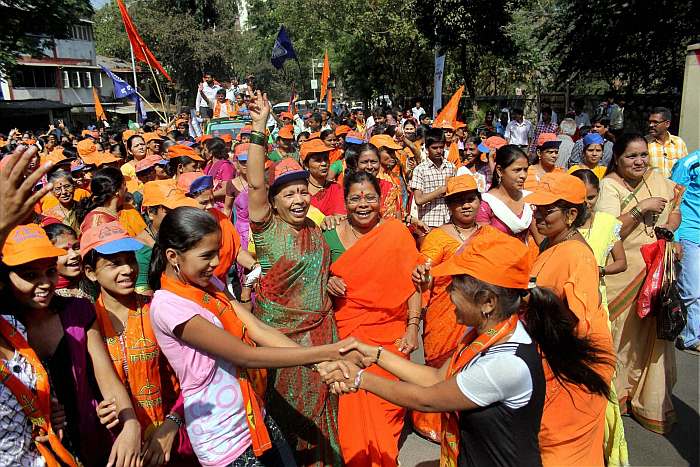 Karoon Dakhavla was Shiv Sena’s tagline in its publicity material for the civic election in Mumbai. Translated as “We did, and showed”, it was meant to underscore achievements during the last five years that Sena, along with ally BJP, ruled India’s richest municipal corporation. Even non-cynics found the claim considerably over-rated given the declining quality of infra-structure and living in the metropolis but the tagline caught the imagination of Shiv Sainiks, rattled as they were by the many scams in the civic body, growing threat from Raj Thackeray’s Maharashtra Navnirman Sena (MNS) and the widely-held belief that a unified Congress-Nationalist Congress Party will spell doom for Uddhav Thackeray-led Sena.

As it became clear that Sena-BJP looked set to retain its power in the Brihanmumbai Municipal Corporation for a fourth term—the alliance won 106 of total 227—a triumphant Uddhav manoeuvred his silver Merc in a victory lap around Dadar on Feb 17th evening, waved at his supporters and mouthed: karoon dakhavla. The phrase had acquired a new meaning altogether. That evening, it was a snub to all those who were poised to write him off and draft obituaries for the party, founded by his father Bal Thackeray in June 1966. Swagger is not part of Uddhav’s personality but he seemed to have acquired a hint of it that day.

Celebrations over, it’s time for analysis. Here Uddhav will have to concede that the phrase karoon dakhavla truly belongs to the man he detests beyond belief: estranged cousin, erstwhile playmate, fellow artist Raj.

Raj’s party won 28 seats in Mumbai, up four-fold from a mere seven last election; it’s poised to rule Nashik Municipal Corporation with some help from friends such as the BJP; at 29 in Pune, it’s way ahead of Sena’s 15; and it has marked a presence in Thane. These numbers seem more impressive—and disquieting too—when read against the still fledging party structure, complete reliance on his personal charisma and drive, and a non-ideological campaign.

The MNS went into this election without a manifesto; there’s no need for one, said Raj. He concentrated on the rampant corruption and citizen-unfriendly administrations in the four major civic bodies of Maharashtra, particularly the BMC. He largely steered away from the north-Indian and migrant bashing that’s come to define his politics, he made references to Marathi asmita—pride and identity. And, he performed for his audience at every meeting and rally, poking fun and throwing rhetoric at political rivals, his belligerence and oratory modelled on his uncle. No one was wiser what exactly MNS agenda for these cities was, but Raj drew crowds—and, it now seems, votes too.

There's headache ahead for Uddhav on several counts. First, the MNS symbolically drew blood in the Sena’s citadel—middle-class Maharashtrian-dominated Dadar in central Mumbai—winning all seven wards there. Six of these had Sena corporators and one Congress in 2007. Sweet personal revenge of sorts for Raj but an ominous sign for Uddhav: his challenger can strike in the heart of Sena’s stronghold—and win.

Two, the MNS managed to increase its seat tally four times without playing the “spoiler” that its candidates did in 2009 general and assembly elections, when Raj’s candidates split the Sena vote and helped Congress or NCP to coast through the victory line.

Three, MNS candidates were placed second in as many as 56 of Mumbai wards, some of these seats lost by small margins, and third in about 20. Read with its tally of 28 seats, it means Raj now has political clout and traction in just under half of Mumbai’s smallest constituencies.

Four, the MNS secured a vote share of 20 per cent, up from its rather modest 11 per cent five years ago. It means one in every five vote, of the 46 lakh votes cast, went to Raj’s party. In Thane too, it gained nearly 10 per cent vote share over last civic election, and now stands at 15 per cent of the total vote there.

Five, the MNS now seems to be an attractive political option for not just those disenchanted with the Sena, but a completely new category of voter. What concerns Uddhav is that the 20 per cent vote share is just a shade behind the Sena’s 21.3 per cent vote share. While the Sena vote actually dropped a bit — 0.4 per cent — compared to last election, Congress and NCP both lost nearly four per cent each.

Given how Raj is positioning himself, with his open admiration for Narendra Modi, it stands to reason that the votes for Raj are votes for the right-wing, so he is in effect eating into the SS+BJP combo. Not surprisingly then, the BJP has woven the Raj factor into its long-term political equation for the state. The MNS gaining ground—and rivalling the Sena—means the BJP has a choice in its future alignments. Raj’s empathy for Gujarat chief minister Narendra Modi’s development paradigm, which he clearly outlined during his ten-day “discover Gujarat” tour last year has won him friends in the national party already. He enjoys a rapport with party president Nitin Gadkari as well as state BJP leaders. So far, his virulent and violent anti-north Indian stance was a problem for the national party; Raj almost gave it the go-by in his recent campaign.

If the combined vote share—41.3 per cent—of the Sena and MNS is anything to reckon with, it affirmed that Mumbai remains—or has returned to being—a saffron city after voting over-whelmingly for the Congress and NCP in both the 2009 general and assembly elections. The let-down is a conundrum that both the Congress parties are trying to unravel. However, many old-timers in the Sena renew the question: why can’t the two warring cousins join forces? In part, it’s because they are both politically super-ambitious, nurse old bitterness and egos. Clearly, Raj is the bigger gainer this election. Mumbai, indeed urban Maharashtra politics, is set for exciting times ahead.