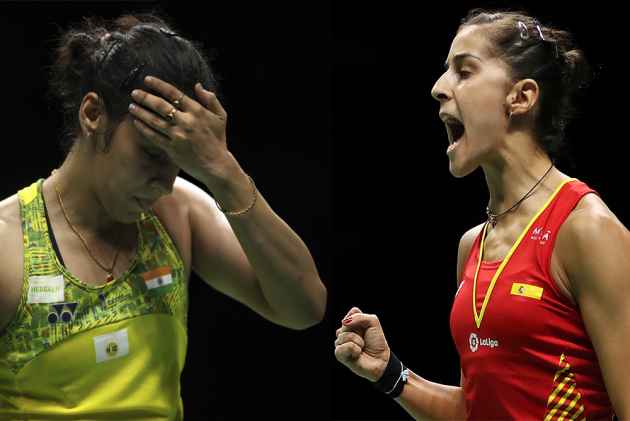 It turned out to be a lop-sided contest between the 2015 edition finalists as reigning Olympic champion Marin once again produced her 'A' game on the big occasion to complete an emphatic 21-6 21-11 victory.

A 5-4 head-to-head count meant little as Marin dismantled Saina with consummate ease. The Spaniard stamped her authority on the match, parading the court and screaming her heart out after winning every point.

"Her movement was very quick today. She was moving so fast and covering the court very quickly. The kind of shots that she played, it seemed like she was suddenly very fast. Also I had a late match yesterday so to face someone so quick was difficult. I didn't understand what to do, she never gave me a chance to play my game," Saina told reporters.

Marin said: "I'm doing well since first day. I was in control today. I'm the fastest in the world, it is my strength and I have to keep doing it. I am happy to reach the semifinal. The favouite player (Tai Tzu Ying) to win the tournament lost today, so ll try to give best tomorrow against China's He Bingjiao."

Marin played a perfect game to bamboozle Saina in the opening game. The left handed shuttler took just 12 minutes to race away with the game after earning 14 game points when Saina failed to retrieve a shot. The Spaniard closed it with a smash from close to the net.

Saina showed better fight in the early stages of the second game but Marin managed an 11-8 advantage at the break. The Spaniard stifled Saina with her stroke play and placement to surge ahead.

Marin gained 10 match points when Saina found the net and the Spaniard closed the match when the Indian went long again.