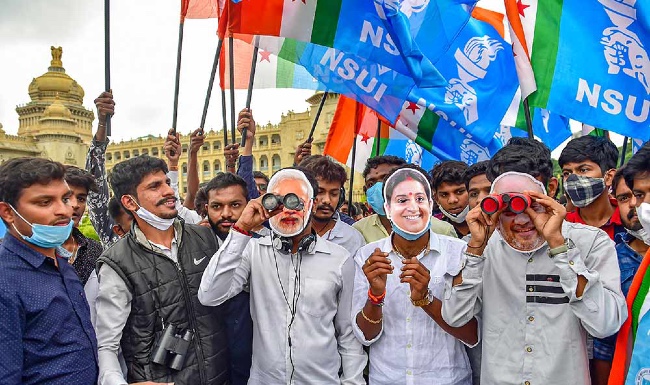 The Supreme Court in a significant development on Friday stayed the ongoing inquiry by a West Bengal government appointed commission headed by former apex court judge M B Lokur to probe the Pegasus snooping allegations.

A bench headed by Chief Justice N V Ramana expressed dissatisfaction over the inquiry also being conducted by the West Bengal commission. On October 27, it had ordered the setting up of a three-member panel of cyber experts to probe the alleged use of Israeli spyware Pegasus for the surveillance of certain people under the monitoring of former apex court judge R V Raveendran.

The bench, also comprising Justices Surya Kant and Hima Kohli, on Friday took note of the plea that the Lokur commission had commenced work despite the assurance of the West Bengal government it would not proceed with the inquiry.

“What is this? Last time you (West Bengal government) had given an undertaking, which we wanted to record, that the commission will not proceed. You had said that it was not necessary to record in the order. Again you started inquiring,” said the bench.

Senior advocate A M Singhvi, appearing for the state government,  said it had earlier conveyed the message of restraint to the Lokur panel which did not proceed till delivery of the October 27 order. Moreover, the government cannot give such a direction, he said.

“Can I make one thing clear that I had said that I do not control the commission but I would convey the restraint. I conveyed the restraint and it was up to the time till the court decides the matter.

"Now after the Lordships decided the matter (Pegasus cases), the commission started...Simply call the counsel of the commission (Lokur panel) and pass the orders and I cannot as the state government give instructions. I had conveyed the restraint and the commission did not do anything till the court passed the order,” Singhvi said.

The bench said it understands the “state’s predicament” and ordered, “Alright, we will issue notice to all the concerned respondents and for the time being we stay all the proceedings. Lawyer M L Sharma, who has filed a plea in his personal capacity, said the proceedings of the West Bengal Commission of inquiry was “gross contempt of court”.  “We will see,” the bench observed.

The matter was mentioned for urgent hearing on Thursday before the bench by NGO Global Village Foundation Charitable Trust, which submitted that the commission was going ahead with the probe despite the fact that the top court has constituted an expert committee in the case.

The NGO said the state government had assured the top court that it would not proceed with the probe. Besides Justice Lokur, former Calcutta High Court chief justice Jyotirmay Bhattacharya is the other member of the commission of inquiry announced by the West Bengal government recently.

Appointing the panel of experts on October 27, the apex court had said the state cannot get a "free pass" every time the spectre of national security is raised and it cannot be the “bugbear” that the judiciary shies away from.

Delivering one of the more significant verdicts in recent times over the issue of citizens’ right to privacy, it had said mere invocation of national security by the state cannot render the judiciary a "mute spectator" and asserted that indiscriminate spying on individuals in a democratic country cannot be allowed.