Sealed With A Kiss

Women have always been drawn to cricketers in India like a moth to a flame. 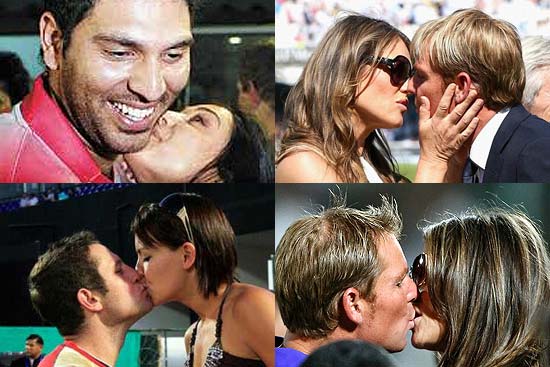 It is no exaggeration to say that cricket is the only sport in India that appeals to women at large. This has not been a recent phenomenon. Of course, television and live coverage of matches have added substantially to the female fans in the last 25 years, but the popularity of cricket with Indian women was never in doubt. In fact, it goes as back as to the 1930s, when women used to flock the Mumbai maidans during matches between popular teams.

No other sport has had such a hold over Indian women. Howsoever supreme India may have reigned in hockey before and after the World War II, the game and its players, who enjoyed an iconic status, could hardly attract the country's women.

It is cricket all the way for most Indian women. At the matches, their colourful presence brings a welcome element of beauty and glamour and enhances the atmosphere. When they love cricket, can they resist not liking their practitioners, who are treated as film stars in India?

Women have always been drawn to cricketers in India like a moth to a flame.

The third Test against Australia at the Brabourne Stadium in Mumbai in January 1960 afforded a fine example. When Abbas Ali Baig reached his second 50 of the match on the fifth and final day, an unprecedented incident occurred. A 20-something young lady ran out of the North Stand and made a dash towards the wicket.

Before anyone could understand what was happening, she planted a kiss on the handsome cricketer's cheek and sprinted back to her place. Her action was as surprising as it was sensational. "I wonder where all these enterprising young ladies were when I was scoring 100s and 200s!" exclaimed Vijay Merchant, his tongue firmly in his cheek, as an expert commentator on the All India Radio.

Many felt the kiss turned out to be a curse for Baig. The talented batsman, who had begun his Test career in a blaze of glory with a century on debut and triggered great expectations, failed to live up to his early promise. Baig disappeared from the Test scene after a couple of years but not the kiss. It flew across the country and became a hot topic of discussion. And it remained attached to Baig forever.

Thirty-five years later the kiss made a dramatic return in Salman Rushdie's novel, The Moor's Last Sigh, published in 1995, with reference to a painting. Taste a sample of Rushdie's "triumphant tribute" to language centred around Baig fated to be known more for that kiss than his cricket:

"The painting, dating from 1960, was called The Kissing of Abbas Ali Baig, and was based on an actual incident that occurred during the third Test against Australia at Bombay's Brabourne Stadium. The series was level at 1-1, and the third game had not been going India's way. In the second innings, Baig's half-century — his second of the match — enabled the home side to force a draw. When he reached 50, a pretty young woman ran out from the usually rather staid and upper-crust North Stand and kissed the batsman on the cheek. Eight runs later, perhaps a little overcome, Baig was dismissed (c Mackay b Lindwall), but by that time the match was safe," reads the particular chapter in The Moor's Last Sigh.

"Aurora [mother of Moraes Zogoiby, aka Moor, and an artist] liked cricket — back then more and more women were being drawn to the game, and young stars like A.A. Baig were getting to be as popular as the demigods of the Bombay Talkies — and by chance she was at the ground on the day of the gasp-provoking, scandalous kiss, a kiss between beautiful strangers, perpetrated in broad daylight and in a packed stadium, and at a time when no movie house in the city was permitted to offer its audiences so obscenely provocative an image. Well! My mother was inspired. She rushed home and in a single sustained burst completed the painting, in which the 'real' shy peck, done for a dare, was transformed into a full-scale western-movie clinch. It was Aurora's version that everyone remembered; even those who had been at the ground that day began to speak — with much disapproving shaking of heads — of the moist licentiousness, the uninhibited writhings of that interminable kiss, which, they swore, had gone on for hours, until the umpires prised the couple apart and reminded the batsman of his duty to his team. 'Only in Bombay,' people said, with that cocktail of arousal and disapproval that only a scandal can properly mix 'n' shake. 'What a loose town, yaar, I swear'."

It was widely anticipated by many, and feared by some, that the Baig kiss would set a trend of sorts and "inspire" other young ladies. Far from it. Not until January 1975 was there a repeat of the "historic" kiss. This time, too, it occurred in Mumbai and not far from the Brabourne Stadium either. The venue was newly constructed Wankhede Stadium which, incidentally, was hosting its maiden Test — the fifth and last of the 1974-75 series between India and the West Indies.

With both the teams winning two Tests, the series was interestingly poised. Clive Lloyd declared the West Indies first innings at 604 for 6. India gave a fitting reply with 406. The visitors declared their second innings at 205 for 3 and set India a target of 404 in the fourth innings. But India lost its frontline batsmen in a jiffy even as the Test, which was as good as lost, entered the sixth day.

Young Brijesh Patel, attempting to regain his form and cement his place in the Indian team, batted brilliantly attackingly and remained unconquered on 73, a jewel of an innings studded with 11 fours and 2 sixes, even as the West Indies romped home by 201 runs. When Patel reached his 50, a young woman in saree sprinted towards the wicket like a 100-metre runner with lathi-wielding cops chasing her. Before they could catch her, or the umpires stop her, she kissed a bewildered, blushing, 23-year-old Patel.

The kiss appeared to have brought good luck for Patel, who scored a splendid 115 not out at Port of Spain in Trinidad, shared in a 204-run fifth-wicket stand with Sunil Gavaskar and topped the series averages with a whopping 207.00 on the West Indies tour in 1976. This belief was further consolidated when Patel played two masterly innings of 82 and 83 — both at the Wankhede Stadium in Mumbai — against New Zealand and England, respectively, in 1976-77.

But the kiss had only flattered to deceive. Or so it seemed. Just like in England in 1974, he was technically exposed against hot pace and stinging swing down under in 1977. He was dropped for a couple of years and recalled only for India's disastrous World Cup campaign in England in 1979. Though Patel kept performing and scoring prolifically in first-class cricket in the 1980s, too, his Test career was over.

There has been no further incident of a cricketer being kissed on the field in the last 40 years. Those were different days. There were no watertight fencings. Securities, too, were not that tight. It is well-nigh impossible for the fans now to step on to the ground. There have been cases in a hotel lobby, lounge or bar, where on odd occasions women have both successfully and unsuccessfully attempted to kiss certain cricketers. Certain girls are always looking for an opportunity at private functions graced by cricketers. In 2009, a young girl had tried to kiss Irfan Pathan on the stage of a promotional event in Calcutta.

One similar girl was reported to have literally stalked Mahendra Singh Dhoni for several days around the same time. She was alleged to have finally "caught" the Indian captain and "hugged" him.

Of course, nowadays it has not remained uncommon to see both women and players blowing kisses at each other. Virat Kohli was openly blowing kisses towards his lady love, Anushka Sharma, upon reaching his 9th Test century on the third day of the third Test against Australia at Melbourne in December 2014. When Kohli reached 150, the actress gave him a standing ovation. It was not the first time that Kohli had sent out kisses to Anushka sitting in the stadium. Earlier, too, he had celebrated in the same way on a few occasions.