The flow of rumours and counter-rumours in the run-up to the congress offers a sober reminder that, after nearly 30 years of Chinese reforms, politics in Beijing remain opaque and not open to change. If, as Adam Przeworski defines it, democracy is the "institutionalization of uncertainty," the 17th Congress of the Chinese Communist Party was one of the most democratic in Chinese history. But this was not the sort of uncertainty that Professor Przeworksi had in mind--and it's not necessarily good news for either the Chinese people or a world whose fate has become increasingly intertwined with China's.

The flow of rumors and counter-rumors in the run-up to the congress offers a sober reminder that, after nearly 30 years of Chinese reforms, politics in Beijing remain opaque and not open to change. These uncertainties are consequential because personnel changes correlate with the policy preferences of those who will end up on top. Choosing an heir to Hu Jintao in 2012 will affect the direction of China's political and economic evolution through 2022, when Hu's successor's second term would normally end.

For now, Hu's heir apparent favors redistribution of wealth rather than unbridled growth. This might mean relative cooling of China's overheated export engine and perhaps a reduction in the "giant sucking sound" of resources flowing to China.

Hu's report to the congress may have mentioned democracy 61 times, but leadership selection in the CCP is still a secretive affair. "Intra-party democracy" at the 17th Congress meant that delegates were only able to reject 8 percent of the proposed candidates to the Central Committee.

Uncertainty in Beijing stems from a combination of institutional constraints placed on Hu that long predated the congress. Five years after Jiang Zemin's retirement, Hu is still the victim of his predecessor's inability to control his own succession throughout his 13 years in office.

This has been a pattern since the supreme leader Deng Xiaoping relinquished power. When Deng Xiaoping and a handful of others picked Jiang Zemin as general secretary in the aftermath of the Tiananmen massacre in 1989, they also tied his hands, by propelling Hu to the Standing Committee of the Politburo in 1992. Even after Deng's passing in 1997, Jiang Zemin proved unwilling, or unable, to alter these arrangements. Hu retained his role as Jiang's putative successor until 2002.

For the first time in the history of the CCP, an anointed future general secretary did indeed get the job as intended. However, Hu also inherited Jiang's appointee to run daily party affairs. That choice was Zeng Qinghong.

Zeng's power is the reason why Hu failed to impose the man who was by most accounts his preferred choice for the top post in 2012--Li Keqiang. The defeat was astonishing, given that the 17th Congress, with deaths and retirements, offered Hu opportunity to stuff the Standing Committee with a solid coalition of supporters for his second term and a successor who would embrace his policy agenda.

The leadership lineup that emerged is not one of monolithic unity behind Hu. Backstabbing and policy disagreements may dominate the political process during the next five years, as supporters of Xi Jingping and Li Keqiang maneuver ahead of the 18th Congress. 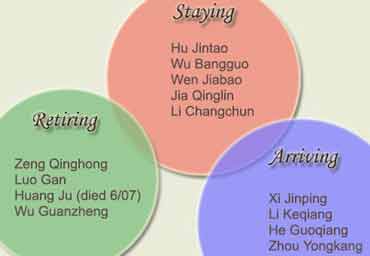 During the past five years, the Hu-Wen leadership worked hard to convey the message that post-Jiang China shifted its priorities to rural China and committed more fiscal transfers from the center to the less-developed provinces, reducing the burden of educational expenditures on rural households for primary and junior-high school, and improving access to heath care--all goals that Hu reiterated in his speech to the 17th Congress.

Yet, as Lenin used to say, facts can be stubborn. Consider per-capita spending for education, health and culture, adjusted for inflation. Comparing the last five years of Jiang's rule (1997-2001) to Hu's first term (2001-2005), it's not at all clear that change is any more dramatic today than it was under Jiang, although 2006 data is not available from all provinces. Dramatic increases in regions like Qinghai, Ningxia or Xinjiang are dampened by much slower investment in education and health in larger provinces like Hunan or Hebei. In fact, inflation has eroded much of the fiscal effort for education and health, whereas seemingly smaller increases in the 1990s were magnified in real terms because of deflation.

At the end of the day, Hu still depends on a growth-oriented model of development, where regime legitimacy and the performance of government officials hinge on their ability to foster economic growth.

A dose of economic caution may be necessary given the uncertainties about the sustainability of China's growth: The fragility of the banking system, a rising oil bill, environmental degradation caused by three decades of extensive growth, as well as risks of recession in China's major export markets, including the US, warrant such caution. But with slower growth may also come a clash between rising popular expectations and hard economic realities. Slower growth may shrink fiscal revenues, required to finance ambitious plans to revamp health care and education among the rural poor.

These challenges are sure to test the leadership capabilities of both Li Keqiang and Xi Jinping. Of the two, Li has the most to lose, since Hu's inability to convince his peers to confirm him as successor forces Li into the post of executive vice-premier, a job that makes him accountable, along with Premier Wen Jiabao, for China's economic performance. Xi, on the other hand, will be shielded from such pressures. He'll have five years to dispense patronage, thanks to his command of daily party affairs and in all likelihood, the presidency of the Central Party School, a job that both Hu and Zeng held concurrently with their vice-presidency. Other freshmen members on the Standing Committee, close to Zeng, will likely rally around Xi.

Hu's apparent defeat now places the Chinese economy in the hands of a cautious man--Li Keqiang. Over the next five years, expect policies somewhat less focused on attracting foreign direct investment and favoring instead limited redistribution in favor of region and social categories that did not fare well in the 1990s.

In the longer run, the secession arrangement to the benefit of Xi Jinping is good news for China's private sector. As a successful leader in Zhejiang, he presided over a model of growth where domestic capital is more decisive than foreign investment, and where capital is more efficiently allocated than in other parts of China, as described by Yasheng Huang in his book, "Selling China: Foreign Direct Investment During the Reform Era."

Xi may not be in a position to promote this model explicitly during the next five years, but post-2012 China may see a re-focus on China's domestic private sector, steering away from state-led redistributive schemes favored by Hu and Wen.

Further surprises could wait down the road. Xi--son of a veteran revolutionary--knows his party history well. Since Mao Zedong's takeover of the CCP, there's been a long parade of "sucessors," all installed with great fanfare, who ended up either purged (Liu Shaoqi), or killed (Lin Biao) before taking office; and others ousted by "comrades": Hua Guofeng in 1981, Hu Yaobang in 1987 and Zhao Ziyang in 1989.

In the People's Republic, unexpected transitions are the norm, not the exception. For all the enthusiasm that China's rapid growth has generated abroad, the result of the 17th Party Congress might now introduce a greater degree of caution.

Pierre F. Landry is associate professor of political science at Yale University and the author of Decentralized Authoritarianism in China--The Communist Party's Control of Local Elites in the Post-Mao Era (forthcoming with Cambridge University Press). Rights: © 2007 Yale Center for the Study of Globalization. YaleGlobal Online