Secrets Behind Six Decades of Broad and Vibrant On-Stage Embellishments

If it’s easy to hail an artiste for his all-roundish skills, it may be even more interesting to locate the reasons behind them. An overview of top Kathakali artiste Sadanam Krishnankutty, who celebrates his 60th year of career tomorrow: 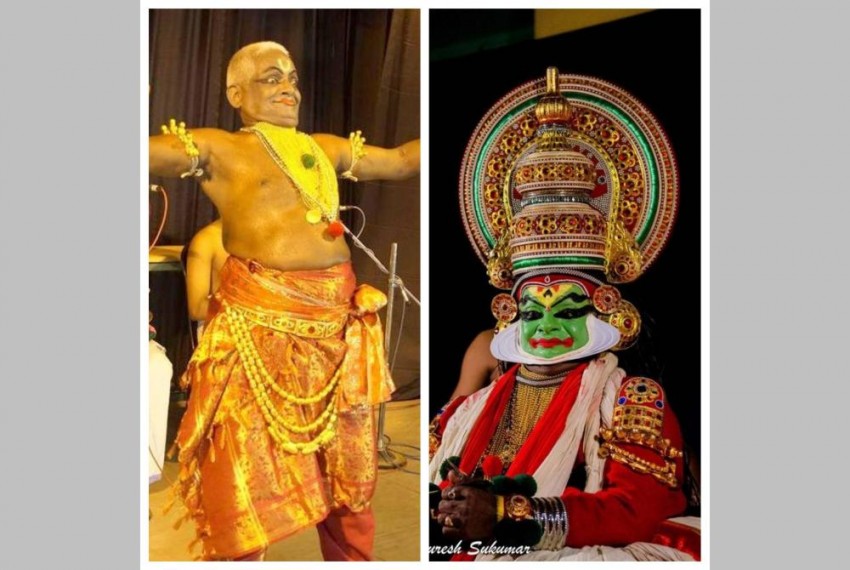 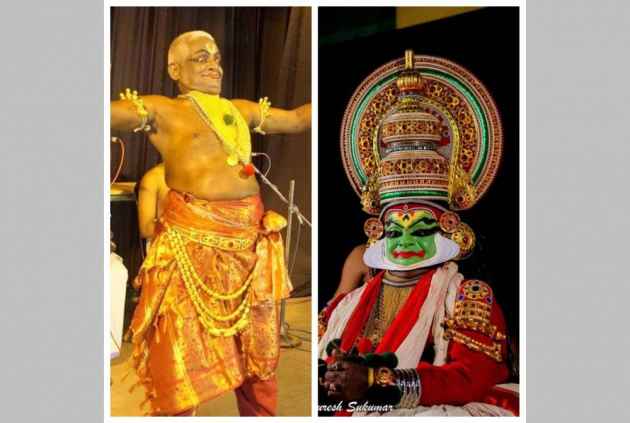 In the 60-watt yellowness of the greenroom, Sadanam Krishnankutty’s face gains a magical sheen when he carefully applies the colours on the stylised sketch that is suggestive of the character in his art of Kathakali. It takes another three hours for the actor-dancer to completely deck up and enter the stage for his power-packed performance from the mythological chapter.

For the audience, it would be tough to believe that the artiste is a septuagenarian. For, it’s not just the transformational brightness of the visage; Krishnankutty has his body movements and hand gestures sparkling in a way that belies his age: 76. It was exactly 60 years ago that a slim and dark-complexioned little boy made entry into one of the world’s most advanced classical ballets. From 1957 till date, Krishnankutty has been one of the most vibrant figures in south India’s Kathakali, having been a busy artiste performing a whole range of roles like almost no other contemporary all his life.

The nearly unparalleled all-round excellence this exponent has displayed over half-a-century now has apparently much to do with his life experiences as a whole, in hindsight. Krishnankutty, who is celebrating tomorrow (October 29, Sunday) his six decades of on-stage career, wouldn’t string them together, yet they tacitly tell the story of how the artiste capitalised upon one’s own personal episodes to embellish his artistic career.

Krishnankutty recalls his teens as a Kathakali student in Sadanam Kathakali Akademi in his native district of Palakkad. There, at the river-side village of Peroor that is less than 30 km from his equally rugged hometown of Cherpulassery, the boy was brought up in Gandhian ideals. For the 1953-founded institution was headed by freedom-fighter activist K. Kumaran, a local leader (1920-2005) of the Sarvodaya movement conceptualised on the ideals of the Mahatma. “It won’t be just Kathakali classes for us,” he shrugs with a smile. “We were encouraged to do all kind of community activities. Pottery, weaving, soap-making...why, we were also supposed to help out the cooks at the mess.” This kind of a cooperative mindset that lets an individual to multitask did earn Krishnankutty its benefit subsequently on the stage as well. Far from getting typecast, the youngster began presenting a whole range of Kathakali characters—from the virtuous to the antihero to the villain to the buffoon: be the role central or peripheral, male or female.

Sure, it wasn’t just the co- or extra-curricular engagements that shaped up the artiste’s profile. His Kathakali gurus did have a great role in it—again, on and off the classroom. Krishnankutty does value the scholastic efforts of first teacher Thekkinkattil Ramunni Nair (1887-1963) in cultivating diligence in him and his batchmates. “We’d get up at 4 in the morning for the eye exercises held in the light of kerosene-fuelled hurricane lamps. In monsoon months, this will be followed by detailed oil massages till early morning. Then, a playful bath at the river (a tributary of the broad Bharatapuzha) and frugal but sufficiently nutritious breakfast,” he recalls, sitting in his home at the temple town of Irinjalakuda in Thrissur district, where he has settled for long now.

Krishnankutty recalls that Ramunni Nair’s successive guru, Keezhpadam Kumaran Nair, at Sadanam wielded no less influence in the pupils. “The morning and afternoon classes will be followed by an evening bhajan and then a post-dust session where we would brush up mudras in sitting postures. None of these will begin or end in accordance with the classroom bell, as is the custom today in most institutions,” he points out. “Also, Kumaran Nair (1916-2007) won’t exactly show us how to correct a dance defect we committed. He would only give a hint at it, and ask us to find our own ways of perfecting it.”

Sadanam students of that time were also made to even hum a bit of Kathakali music and try their hand in the two main percussion instruments of chenda and maddalam in what little way. “We did simultaneously learn a bit the art of costume-making (besides of course make-up) by joining the work at the greenroom masters in their chamber,” adds Krishnankutty.

If both his gurus were frontline disciple of Pattikkamthodi Ravunni Menon (1880-1948) who refined Kathakali’s pivotal Kalluvazhi school prevalent in central Kerala, Krishnankutty spread its aesthetics southward by gaining popularity in down-state Travancore. Gurus used to entrust in him all sorts of on-stage roles, eventually succeeding in familiarising with a vast magnitude of Kathakali characters. “When you look back, yes, it’s a luxury in disguise,” notes Krishnankutty, a winner of the central Sangeet Natak Akademi honour and the Kerala government’s Kathakali Puraskaram, among others.

Krishnankutty, who has acted in a landmark G. Aravindan movie Marattam (1988), did teach in a few Kathakali institutions, including Kalamandalam, Kalanilayam and for a school in Kollam besides Kala Mandir in Patna. But they were by and large brief stints. Primarily, he has been a ‘freelance performer’, having gained livelihood (not to speak of fame) from the stage—a rarity in contemporary Kathakali scene.

Tomorrow’s ‘Sixtieth Year On Stage’ programme, titled ‘Maaraattam’ at Edappilly on Kochi suburbs, will feature a late-evening Kathakali show preceded by a show of the art’s classroom exercises, a seminar, a felicitation meeting and a Carnatic concert, among others.