The Maratha community has been agitating across the state demanding reservation in government jobs and education. 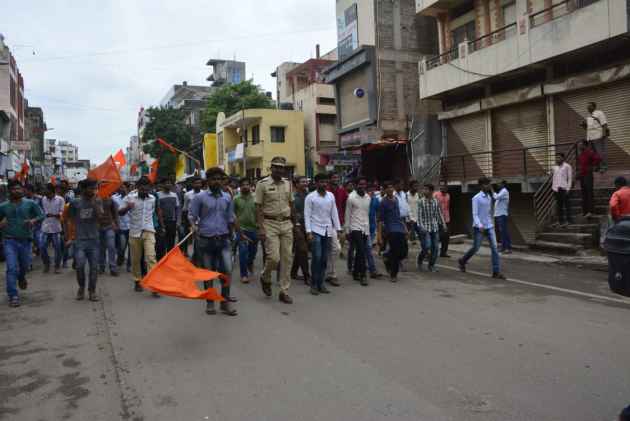 Maratha agitators disrupted road traffic in some parts of Maharashtra today as part of their statewide protests over the reservation demand.

Internet services have been suspended in 7 tehsils of Pune district- Shirur, Khed, Baramati, Junnar, Maval, Daund and Bhor, as a precautionary measure.

Sakal Maratha Samaj, an umbrella body of Maratha groups, has called for a 'bandh' today across Maharashtra, except Navi Mumbai which had witnessed large-scale violence last month during protests by the community.

Amol Jadhavrao, a leader of Sakal Maratha Samaj, said yesterday that they would hold a peaceful protest from 8 AM to 6 pm today,

Another Maratha faction has, however, given an a call to hold a sit in outside the Mumbai suburban district collector's office.

The authorities had yesterday ordered closure of schools and colleges in some cities, including Pune, fearing violence.

Though Navi Mumbai has been excluded from the bandh, the Agriculture Produce Market Committee (APMC) in the densely populated township has decided to remain shut today.

Even as Maratha groups have excluded essential services from the bandh purview, the supply of vegetables was affected in some parts of the state, including Mumbai, APMC officials said.

A vegetable seller in Mumbai's Dadar area said the 'bandh' was not forced on them, but they had voluntarily shut down business for the day in support of the cause.

In Satara, no state transport buses were running today and all vehicles were parked at the central bus stand.

All petrol pumps and vegetable markets were also closed in Satara.

The pro-reservation agitators have decided to take out a bike rally in Pune district today.

A pro-quota group in Latur blocked roads from midnight and disrupted the vehicular movement.

There were similar protests in Nashik, Buldhana and Solapur districts where agitators blocked roads in some areas this morning, police officials said.

The state-run public transport services have been partially suspended in Osmanabad and Buldhana districts to avoid any damage as protesters had targeted buses in the previous round of agitation last month.

Shiv Sena MLA from Kolhapur, Prakash Abitkar, claimed last night that he had sought permission of the state Assembly Speaker to hold an agitation in the Vidhan Bhawan premises in Mumbai today to extend support to the Maratha community's demand for reservation.

However, it was not clear whether he was granted the permission.

The 'bandh' is being organised despite Chief Minister Devendra Fadnavis' assurances that his government was working on providing reservation to Marathas in government jobs and educational institutions, one that is legally sustainable.
Fadnavis had sought time till November to take steps with regard to the quota.

Senior state minister Chandrakant Patil said yesterday that "nothing can be done" on their demand till November 15.

Maharashtra Police has stepped up security so as to maintain law and order.

Marathas, a politically influential community that constitutes around 30 per cent of the state's population, have been demanding 16 per cent reservation.

Community members had earlier taken out silent marches across the state to highlight their demands, prominent among them being that of reservation.
The agitation, however, turned violent after a 27-year-old protester jumped to his death in Godavari River near Aurangabad on July 23.

A number of places, especially Koparkhairane and Kalamboli in Navi Mumbai, had witnessed violence during the Maratha quota stir late last month.