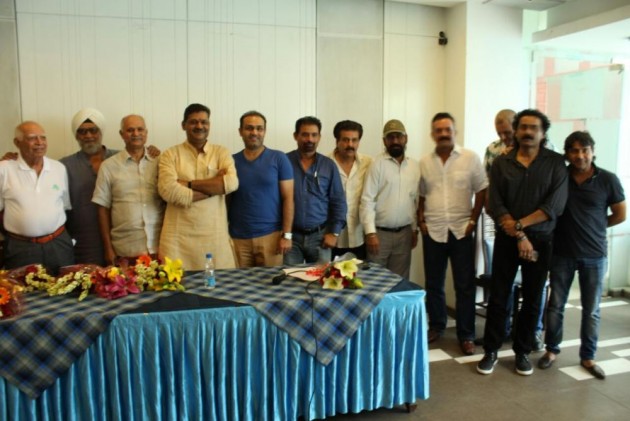 Former India captain Bishan Singh Bedi & Co.'s fight against cricket corruption, particularly in the Delhi and District Cricket Association (DDCA), received a big boost on Saturday when some of the top cricketers from Delhi, Haryana and Punjab, including Virender Sehwag, turned up for a rare get-together.

Although Sehwag didn't speak at the gathering, convened to "understand" the nitty-gritty of the historic Supreme Court judgement on the Lodha Committee report, his presence was important and, perhaps, indicative of his willingness to get involved. He attentively listened as sports lawyer Vidushpat Singhania explained what the Lodha Committee recommendations actually meant.

"Sehwag's mere presence at the get-together was a big boost for us," said a senior organiser of the event.

Former India cricketer Kirti Azad, who is leading the fight against cricket corruption in Delhi, thanked Sehwag for accepting his invitation. Later, as Sehwag, the only Indian to have cracked two triple Test centuries, presented a bouquet to Bedi and touched his feet in respect, it was a poignant moment, appreciated warmly by the gathering.

However, no woman cricketer accepted Kirti's invite. "They are scared" that they would be victimised, he averred. "They are not aware what has happened with the Lodha Committee, that's why they didn't turn up," he said, referring to the wide-ranging, pro-cricketers recommendations that are set to change the way cricket is administered in India.

The other important guest was former India hockey captain Zafar Iqbal, whom Bedi had invited. Zafar received a warm round of applause after Kirti pointed out that when the last time India won an Olympic hockey gold in 1980 he was a crucial cog in that team.

Even Kapil Dev wanted to attend the gathering, said a functionary. But he didn't turn up for some reason. The other prominent player who had assured Bedi and Kirti that he was "with them" but didn't turn up was Gautam Gambhir. Gambhir's absence shouldn't surprise anyone as no other current cricketer was present, lest the BCCI might pull them up.

The gathering was convened to apprise the cricketers that a players' association would soon be a reality in Delhi as the Lodha Committee has recommended it at the national as well as state level. Many cricketers at the get-together looked and sounded upbeat, though a few were not too convinced, asking "kuch hoga kya?"
Bedi and Kirti, however, had no doubts that a cricketers' association would indeed be a reality, after several failed attempts over the years.

Speaking passionately, Kirti recalled the main events of his sustained fight against on-field as well as off-field corruption in Delhi cricket.

Legendary left-arm spinner Bedi saluted Kirti and his comrade-in-arm Sameer Bahadur for their tireless campaign against "corruption in the DDCA", currently crippled following the Supreme Court's historic judgement on July 18.

Bedi said Kirti has been fighting an ideological battle. "And this ideology is being backed by facts and figures. For this, I salute Kirti and Sameer Bahadur. If they have made some noise in the DDCA and Parliament, it is because of these facts and figures," he pointed out, referring to alleged financial irregularities running into crores of rupees.

If it is Bedi and Kirti, former DDCA president Arun Jaitley and current union finance minister can't be far away. While emphasising that Kirti's fight was one of principles, Bedi, referring to the Kirti-Jaitley battle, said: "Kirti took panga with his senior [BJP party] colleague, based on his principles."

Jaitley was DDCA president for 14 years (1999-2013). Both Bedi and Kirti allege that a lot of financial mismanagement took place during his tenure, though neither has blamed him directly for being involved. For levelling these allegations, the BJP has suspended Kirti while the association has taken him to court seeking Rs 2.5 crore in damages for "bringing disrepute to the DDCA".

While virtually ruling himself out of active administration with a smile as he turns 70 — the retirement age for cricket officials recommended by the Lodha Committee — next month, Bedi called the present circumstances a "glorious moment".

"It's a glorious moment for Indian cricket that we can see light at the end of the tunnel. Let this light remain. We have to ensure that Indian cricket prospers, so we have to remain united," he cajoled the gathering of over 100 people, comprising players, coaches and former administrators. "From this gathering I can visualise north zone becoming one [united]. If north zone is one Indian cricket will benefit."

At the same time, Bedi requested the cricketers not to get too excited over the Lodha Committee recommendations, and called for maintaining a balance. "We shouldn't do what the present cricket administration in the DDCA has done," he said pointedly.

Kirti, as usual, was much more forthright and aggressive than Bedi. He recalled the events of 2006 when a Delhi cricketers' association was formed, with the blessings of Bedi and Mansoor Ali Khan Pataudi, but never really took off.

Among the outstation cricketers, former Punjab captain Gursharan Singh, who led the state team to Ranji Trophy title with Bedi as coach in 1993, former Haryana captains Sarkar Talwar and Chetan Sharma, besides Sanjay Bhatia, were present.

Kirti said that after he launched crusade against the malpractices in the DDCA he was targeted. "My family and I received threatening calls. But I walked that path," he said.

Lawyer Singhania, who was part of the Supreme Court-appointed Mukul Mudgal Committee that conducted two probes into the 2013 IPL betting-fixing scandal before the court constituted the Lodha Committee, explained in easy terms the July 18 judgement and answered queries from cricketers and administrators.